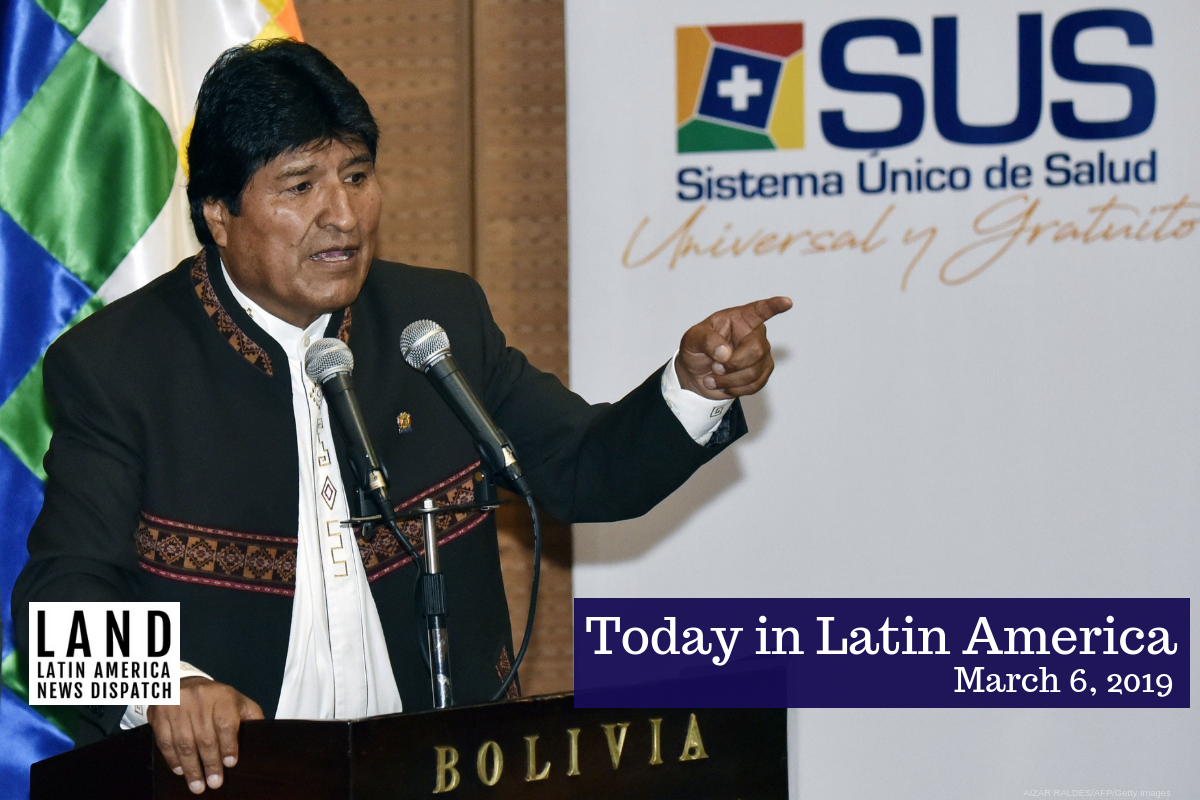 Bolivia's President Evo Morales Ayma delivers a speech during the enactment of a law that grants universal and free health insurance, at the government palace in La Paz on February 20, 2019. (Photo by Aizar Raldes/AFP/Getty Images)

BOLIVIA: In the first five days since its launch, Evo Morales’s new public health care system has assisted 35,000 patients. Registration for the Unified Health System began in January with the government goal to provide coverage to Bolivia’s 5.8 million uninsured — more than half the country. Morales intends to increase healthcare spending by $200 million, but some doctors have said this won’t be enough to address shortages of medical facilities and supplies.

The Medical Association of Bolivia plans to resume strikes against the lack of infrastructure and personnel to sustain the measure. Bolivia spends far more of its GDP on healthcare than the Latin American average. The system is similar to public healthcare available in Argentina and Peru.

UNITED STATES: A San Francisco U.S. District Judge was the latest to rule the Trump administration’s efforts to force sanctuary cities to assist in Immigration Customs and Enforcement (ICE) arrests illegal. This is the 10th court case addressing a January 2017 executive order declaring that sanctuary jurisdictions must comply with ICE or risk losing federal grants. So far, every court has sided against the order, stating that the Justice Department cannot withhold these grants without congressional approval.

MEXICO: The federal government is cutting support to women’s shelters as part of President Andrés Manuel López Obrador (AMLO)’s promise to pull back funding from civil society organizations. Under a new plan scorned by advocates, domestic violence victims will receive money directly from the government. Regina Tamés, director of reproductive rights organization Gire, said that AMLO “doesn’t realize (or doesn’t care) that women are often put in danger when they receive cash in hand.” AMLO has insisted that cutting “excessive” government spending will benefit more people, as many civil society organizations are “mismanaged.”

MEXICO: Residents of a Guanajuato town were allegedly paid off by a fuel-theft gang to block police from raiding their illegal operations. A group of townspeople burned cars and trucks to prevent police from advancing through the town. Police later found envelopes with the gang’s insignia and the instructions, “Relatives should be prepared to protest when asked to do so.” Police eventually managed to seize guns, fuel tanks, and drugs, also rescuing six kidnapping victims.

HAITI: Four people who died in February’s protests against President Jovenel Moïse were buried on Monday in a ceremony held by an opposition party in Haiti. About 300 people made up the procession, which became a protest. The Haitian National Police used tear gas to suppress the demonstrators, according to a Spanish news agency. The opposition has called for more protests tomorrow to continue calls for the resignation of Moïse.

CUBA: In an aggressive gesture with an unlikely impact, Trump is tightening the 60-year embargo on Cuba. He announced on Monday that the United States will allow lawsuits charged against a list of 200 Cuban companies that currently use property that was taken after the country’s 1959 revolution. But since the U.S. legal and financial system is not connected to those businesses, the right to sue may not touch Cuba’s economy or its business sector.

NICARAGUA: Imprisoned journalists like Miguel Mora and Lucía Pineda went unnamed during National Journalist Day at the National Assembly. Instead, pro-government media figures condemned the free press, accusing it of spinning “a web of lies.” The communications associations who held the event have ties to President Daniel Ortega, who has repeatedly violated free speech protections since the country’s protests of April 2018. While Ortega’s deputies applauded the tirade against reporters critical of the Nicaraguan government, disgruntled members from the opposition Constitutionalist Liberal Party walked out.

ECUADOR: Hundreds of Colombians have fled fighting between armed groups in recent days, crossing into the Ecuadorian border town of San Lorenzo. A group of 200 refugees arrived Sunday, after another 150 families that had arrived the day before. The armed groups are fighting over territory in the Nariño Department of Colombia.

VENEZUELA: Venezuelan oil exports have fallen drastically to the United States, allowing Russia to expand into the U.S. market as it props up the Maduro regime. As a show of closer ties, Venezuela’s Vice President Delcy Rodríguez announced that PDVSA, the state-owned oil company, will be moving its European headquarters to Moscow from Lisbon.

CHILE: A 43-year-old man appeared on national television stating that he had been raped by a priest in the Santiago Cathedral in 2015. According to the victim, a cardinal paid him money to remain quiet and not report the incident. The clergy in Chile has undergone a thorough restructuring from the Vatican following a series of scandals and accusations of systemic abuse and cover-ups. The government has said there are currently 148 open investigations involving 225 victims.