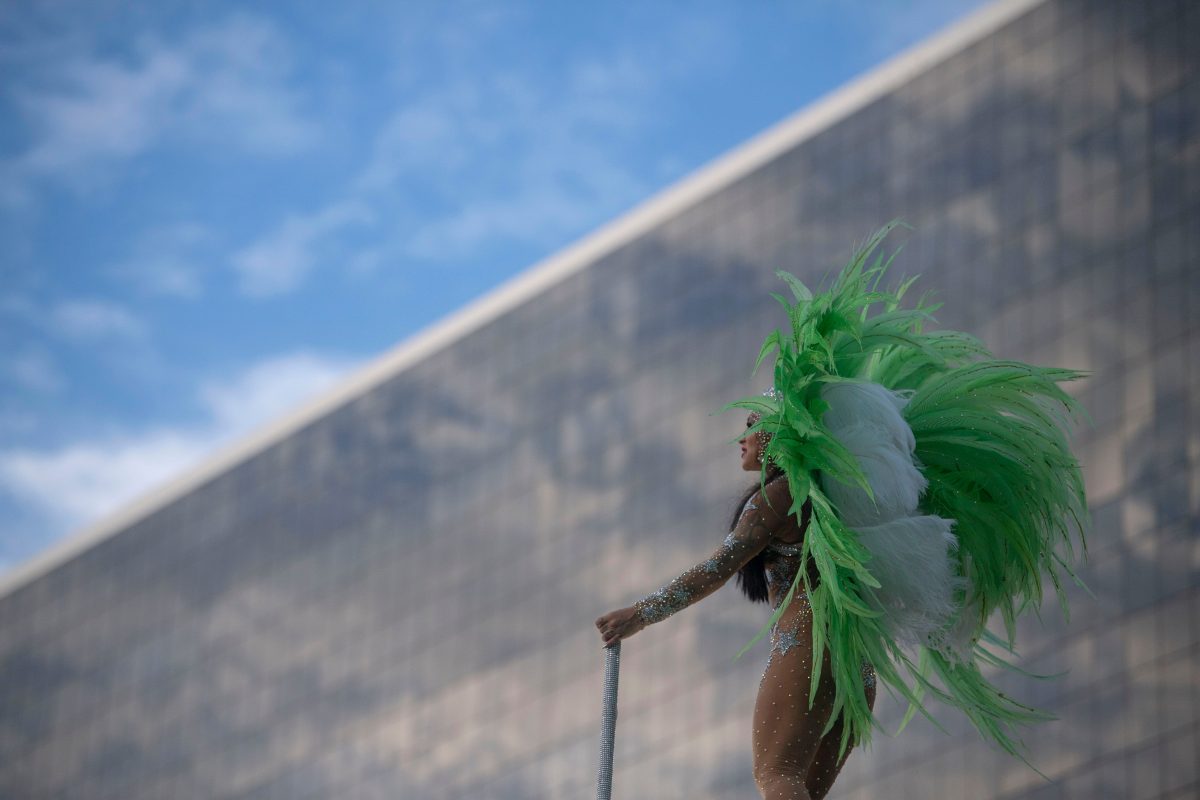 A member of the Mocidade Independente de Padre Miguel samba school performs during the second night of Rio's Carnival parade at the Sambadrome in Rio de Janeiro, Brazil on March 5, 2019. (Photo by Mauro Pimentel/AFP/Getty Images)

RIO DE JANEIRO — There is no spectacle on earth quite like the Rio de Janeiro carnival. Ever since its inception in the mid-1600s, the carnival has displayed stunning floats, street parties called “blocos,” dazzling costumes and fast-tempo songs that celebrate Afro-Brazilian history. This year, as more than 1.5 million tourists were expected to take on the streets and over 100 samba schools grouped in different categories (known as series) geared up for the first carnival in the Jair Bolsonaro era from March 1-9, this new edition of the world’s greatest show has faced political brinksmanship—and potential economic setbacks.

Last December, the Rio de Janeiro prefecture announced that it would cut 50 percent of its budget to the samba schools under the “Special Group” category—considered the carnival’s most prestigious. This meant that all 14 schools would receive 500,000 Brazilian reals ($133,000) instead of the 1 million Brazilian reals they receive each year ($267,168). The 13 schools that are part of Serie A, carnival’s second division, would only receive 250,000 Brazilian reals ($66,800). In 2018, the overall amount of money schools received was nearly 6.4 million Brazilian reals ($1.7 million), almost half of what they had received between 2016 and 2017. Some of these schools come from Rio’s poorest neighborhoods (known as favelas) and they rely on the help of its residents to build floats or be part of the parade.

According to local newspaper Extra, citing daily O Globo, municipal secretary Paulo Messina said at the time that Rio’s city hall “is not a commercial event nanny… the Special Group has to become professional as any major commercial event.” While it was uncertain how the budget cuts would greatly affect this year’s performance, some of the schools have complained that the money would not be enough to accomplish their goals.

“Messina is doing a great injustice with the League of Samba Schools of Rio de Janeiro [LIERJ]… Nobody asked for less than last year, with 250,000 Brazilian reals I cannot finish my work,” Reginaldo Gomes, president of the Inocentes de Belford Roxo school, told local press in December. Likewise, the LIERJ said in a statement at the time that the budget cuts generate a devastating effect over a carnival that is seen as “an important element of cultural value, social insertion and even investment for tourism in the city, according to a study by the Ministry of Culture, in partnership with the Getúlio Vargas Foundation.”

Despite schools’ claims that they have struggled to find guidance and municipal spaces to produce their costumes and floats weeks prior to carnival, the relationship between the schools and the city hall surrounding the festivity seems to be in a standstill to date.

“[Rio] Carnival is a big baby who needs to be weaned and walk with his own legs,” Rio Mayor Marcelo Crivella told the press on February 15, adding that this year’s carnival will see a 15 percent reduction in the total number of parades. Marcelo Alves, Rio’s secretary of tourism, noted that the focus of the carnival should be on quality, not quantity.

Quenia Ribeiro, a 50-year-old Rio native, said that the prefecture’s stance on the business model of samba schools is unfair.

“Carnival does bring money to the city, because it is an intrinsic part of Rio,” she told Latino USA. “The hotels are full and taxi drivers have plenty of work because they are moving tourists around. So [samba schools] are bringing money to Rio.”

Some leaders of the samba schools believe that the ulterior motive to cut help to the carnival is grounded on Crivella’s religious background. The 60-year-old mayor is a former evangelical bishop, and he has not taken part of the carnival’s most important rituals, such as handing over the keys of the city to the King Momo or joining the blocos.

“This carnival is different from past editions because there is persecution with religious motives from Crivella, and this harms the preparation of [the Rio] carnival,” Marcelo Pires, president of the top samba school Academicos do Salgueiro’s cultural department, told Latino USA.

Leandro Vieira, member of the Mangueira’s samba school, explained to local press last month that “from an evangelical doctrine, carnival is the devil’s feast,” but as the mayor of Rio de Janeiro, Crivella “should embrace the tradition of the city’s carnival.” While Alves told AFP in January that the city’s decision to reduce subsidies that the city there were no political or religious reasons in the cut of resources,” Crivella kept his distance from the carnival festivities in the famous Marquês de Sapucaí sambodrome this week.

When carnival kicked off over the weekend, some took a direct stand against Bolsonaro, calling carnival “an act of resistance.”

The city of Rio de Janeiro did comment to Latino USA.

In fact, the Rio carnival comes amid a new era of evangelical politics. Last January, right-winger Jair Bolsonaro assumed the presidency of Brazil under the mantra “Brazil above everything, God above everyone.” Though Bolsonaro considers himself a devout Catholic, he won the presidency thanks to the support of Brazilian evangelical Christians, who accounted for one of every four voters. For a nation that has incorporated the representation of the LGBT community into the carnival festivities, Bolsonaro once said that he would not be capable of loving a gay son, and instead, he preferred that his “son died.”

Bolsonaro’s rise spurred concerns early this year about the future of gay parades in the Salvador and Rio de Janeiro carnivals. A rumor spread over social media saying that Bolsonaro signed a decree to end the festivities and parades, but it turned out to be false information. Meanwhile, in Sao Paulo, this year’s carnival has seen an increase in the sale of Bolsonaro masks and blue-and-pink garments, alluding to a controversial remark by Bolsonaro’s minister of women, family and human rights Damares Alves, a former evangelical pastor who said early this year that “girls wear pink and boys dress blue.”

The president also showed his contempt for this year’s carnival celebrations after sharing a tweet with an explicit video. “I don’t feel comfortable showing it, but we have to expose the truth so the population can be aware and always set their priorities. This is what many street carnival groups have become in Brazil,” he tweeted on Wednesday.

Although the carnival generates millions of dollars for Rio, some experts have questioned whether the city truly understands the significance of this event. According to a 2017 study from researcher and professor Jair Martins de Miranda of the Federal University of the State of Rio de Janeiro, “the world of samba in Rio de Janeiro is unaware of samba from around the world, and does not realize the importance that it has, along with Carnival, in adding value to Brazil’s image abroad.” He went on to say that “this, along with other factors, ultimately causes the country to miss out on business opportunities, while its institutions fail to promote a public policy of intercultural exchange in the segment.”

The Importance of Carnival

Beyond the economic and political struggles, some regard the carnival as the opportunity to exude energy, passion and excitement. “I think carnival is important for the cariocas because it’s a time of the year to express themselves without judgment, allowing them to display their community pride as they sing and dance to the booming sound of their official school song,” Justin Scott, a New York-based photographer who has visited Rio since 2014 to capture images of samba schools, told Latino USA. “Rio carnival is truly a unique time and place, which is why so many people plan their whole year around visiting Brazil during this time, myself included.”

For Salgueiro’s Pires, problems surrounding carnival always occur, “especially in such a tumultuous electoral year [of 2018], but the school’s effort to unite helped us overcome any difficulties.” When asked about the importance of the Rio carnival, he said that “it is the largest manifestation of the cultural expression of the Brazilian people, especially for the communities in Rio, carnival is important both culturally and economically for the city. Whoever doesn’t value this fact is not a true carioca.”