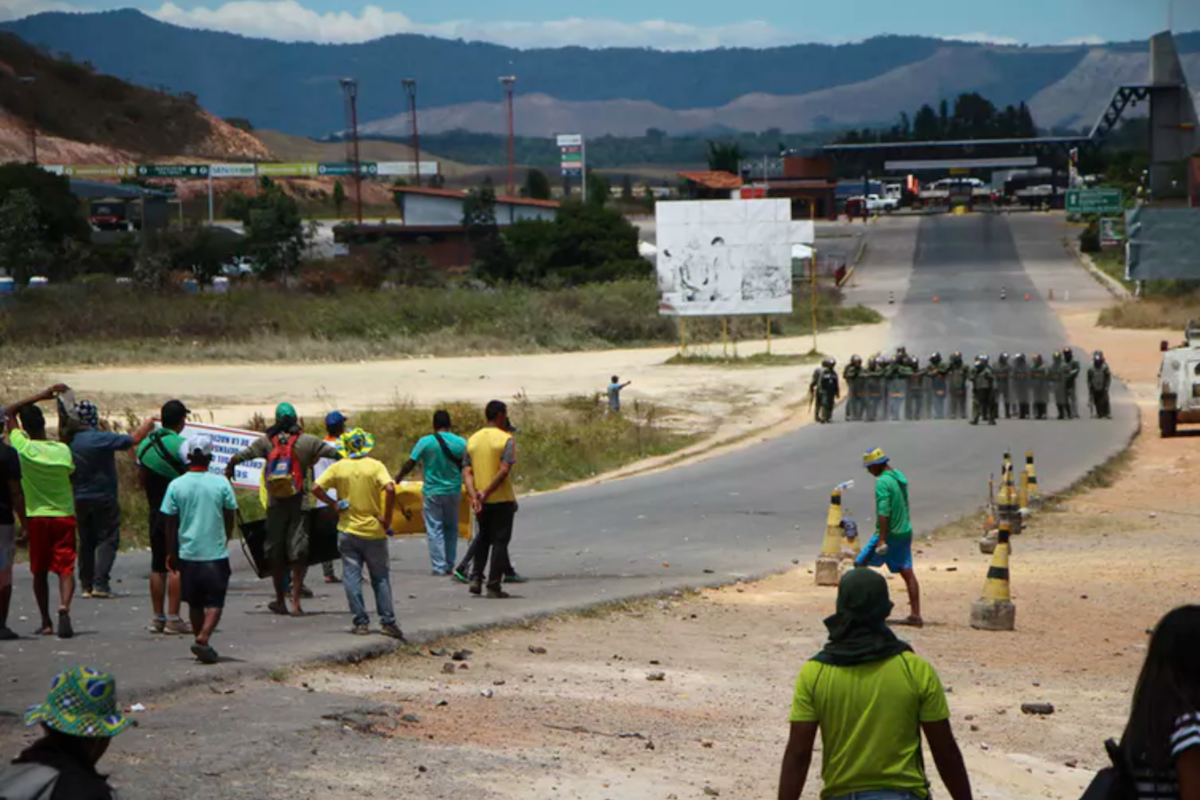 Clashes between opposition protesters and Venezuelan soldiers at the Venezuela-Brazil border have killed an estimated 25 people. (AP Photo/Edmar Barros)

The United States, Colombia and Brazil —all supporters of Guaidó’s quest to unseat Maduro— have amassed hundreds of tons of medical and food supplies at Venezuela’s borders with Colombia and Brazil. Maduro, who condemns the humanitarian convoys as the pretext for a U.S.-led military invasion, refuses to allow the aid through.

The aid standoff grew deadly between February 22 and 24. As Venezuelan opposition members protested the border blockade, Venezuelan security forces opened fire. As many as seven demonstrators were killed at the Colombian border and an estimated 25 demonstrators died near the Brazilian border.

Though he has quietly welcomed planes bearing 300 tons of humanitarian assistance from Russia, an ally, Maduro has now closed Venezuela’s land borders with Brazil and Colombia, and severed diplomatic ties with Colombia.

Relations between Venezuela and Brazil are deteriorating fast, too. As researchers of crime, violence and military conflict in Latin America, we have watched with concern as Brazil’s president militarizes the country’s border in response to Venezuela’s crisis. The recent clashes over humanitarian aid have heightened the risk of conflict between these two South American countries.

Brazil’s president, the right-wing former military captain Jair Bolsonaro, is an admirer of U.S. President Donald Trump and a fierce critic of all leftist governments, including Venezuela’s.

Since Guaidó challenged the left-wing Maduro for the Venezuelan presidency in January, following a presidential election criticized domestically and internationally for irregularities, Bolsonaro has promised to do “everything” necessary to help Guaidó restore democracy.

In February, Bolsonaro received Guaidó —then on an impromptu diplomatic tour of Latin America— at the presidential palace in Brasília with all the pomp of a state visit.

Guaidó is not the only Venezuelan to arrive in Brazil recently.

Every day, thousands of Venezuelans pour into neighboring countries, fleeing hunger, poverty and scarcity. There are over 3.4 million Venezuelan refugees and migrants worldwide, according to the United Nations.

Colombia has received the brunt of the mass exodus, receiving over 1.1 million refugees and migrants. But an estimated 96,000 Venezuelans have also come to Brazil since 2017, most arriving on foot to the northern Brazilian border state of Roraima. Roughly 65,000 of those Venezuelan migrants have applied for asylum in Brazil.

To manage the influx, Brazil plans to double its already significant military presence at the Venezuelan border, where at least 3,200 soldiers were sent in 2018 to “guarantee law and order.”

Meanwhile, Venezuelan security forces in tanks patrol the border with Brazil to enforce Maduro’s February 21 order that nothing —not aid, not migrants— crosses between the two countries.

The Brazilian Ministry of Defense is negotiating with the Venezuelan army to prevent further violence over humanitarian aid delivery and remove some heavy artillery from both sides of the border. And Brazilian Vice President Hamilton Mourão, a four-star general, says Brazil rejects taking any “extreme measures” in Venezuela.

But the potential for a military confrontation feel very real.

Bolsonaro has dispatched planes with 22 tons of rice, powdered milk and medical kits to Roraima to help the roughly 5,200 Venezuelan refugees and migrants living in shelters and on the streets there.

Efforts by Venezuelan opposition supporters to bring some of that aid into Venezuelan territory have been forcefully rebuffed by Venezuelan security forces. They set up barricades, fired tear gas and targeted demonstrators.

The Brazilian military intelligence website Defesa Net reports that Venezuela has moved anti-aircraft missiles to the border, spurring open speculation in Brazil about how a war with its heavily militarized northern neighbor might play out.

Violence at the Borders

It is part of the Lima Group, a coalition of 14 Latin American governments and Canada that recommends a managed exit by Maduro to resolve Venezuela’s crisis. The group is pushing Maduro to relinquish his power and leave the country, allowing Guaidó to lead a transitional government and call new elections.

But Bolsonaro has made clear that he considers Maduro to be a dictator.

“At the end of the day, [Venezuelans] are citizens, our brothers, and they are going through serious difficulties under the dictatorship of Nicolás Maduro,” he said in October.

During Brazil’s 2018 presidential campaign, Bolsonaro and his three sons —who are also politicians— traded Twitter insults with Maduro. Bolsonaro’s youngest son, a hot-headed 34-year-old congressman and Steve Bannon booster, even called for the assassination of the Venezuelan leader.

Maduro, for his part, has labeled Bolsonaro a fascist and the “Hitler of modern times.” He accuses both Bolsonaro and Vice President Mourão of being U.S. puppets.

Bolsonaro has toned down his belligerent rhetoric in recent days, focusing on the need for democracy and humanitarian aid in Venezuela.

This is likely at the urging of Vice President Mourão and other generals who hold cabinet positions in his government. Brazil’s military, it’s clear, wants to avoid a messy and protracted conflict with its northern neighbor.

Mourão has disputed claims that the U.S. is establishing a military base in Brazil, saying that under no circumstances would Brazil allow U.S. troops to enter Venezuela through Brazil.

He says the only possibility of conflict with Venezuela is if Brazil is attacked first.

Virtually every Brazilian government since the end of military dictatorship in 1985, both left and right, has espoused non-intervention and respect for the national sovereignty of its neighbors.

But Venezuela is an unprecedented challenge—a political, humanitarian, and migration crisis of a scale never before seen in Latin America.

All of South America hopes to avoid a civil war that could spill over into the region. As Bolsonaro is learning, humanitarian aid, migrants and political relations with Maduro must be handled with extreme caution.

The president’s influential youngest son doesn’t seem to have received the memo.

On February 23, Eduardo Bolsonaro tweeted that Maduro will only be ousted “with gunshots.”