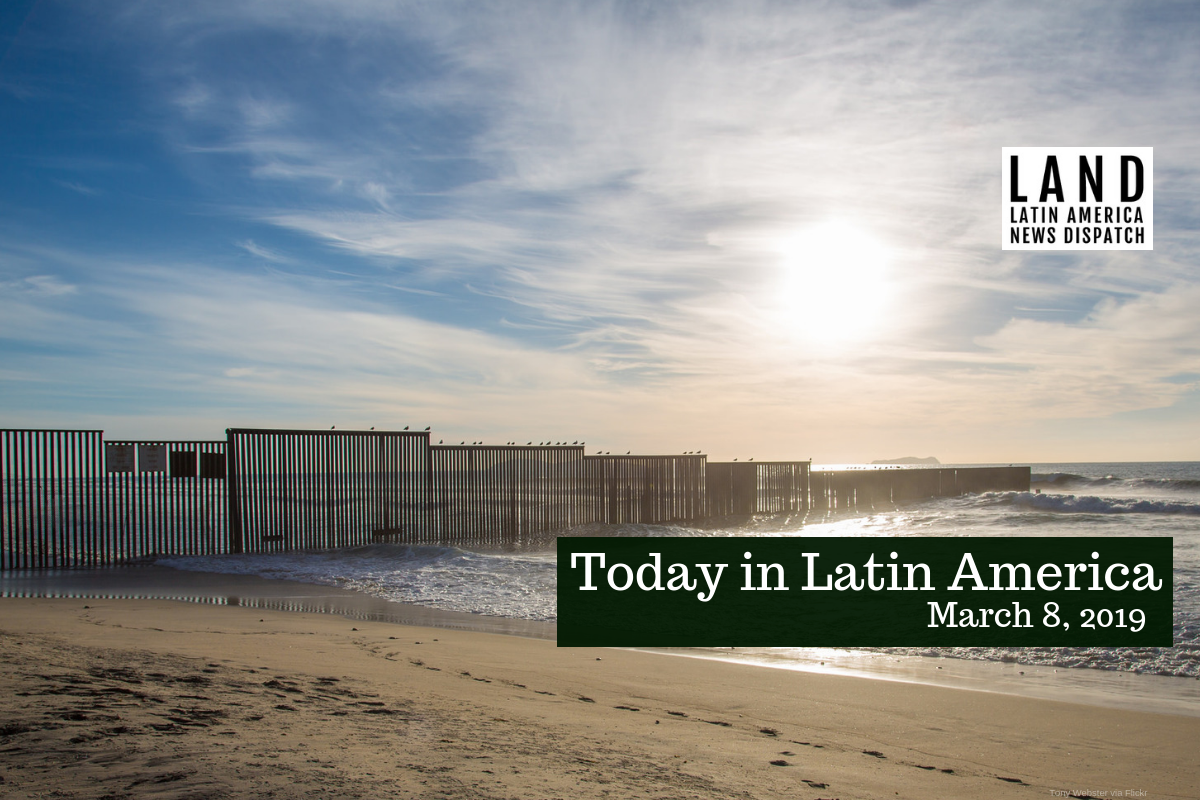 UNITED STATES: The Department of Homeland Security organized a secret government database of journalists, activists and other organizers linked to last year’s migrant caravan, according to a NBC 7 San Diego report. People listed in the documents include 10 journalists and an American attorney. The information in the database included passport photos, date of birth and role in the caravan. Several people on the list had their passports flagged and were denied entry to Mexico.

The database was a part of “Operation Secure Line,” an attempt to collect information on the group of thousands who came to the United States last year seeking asylum. Yesterday, DHS officials said an independent watchdog was investigating the database. Civil liberties groups, including the Southern Poverty Law Center and the Committee to Protect Journalists, denounced the database as a violation of free speech rights. ACLU staff attorney Esha Bhandari called the government’s targeting of journalists and migrants “an outrageous violation of the First Amendment.”

U.S./MEXICO BORDER: On Tuesday, Immigration and Customs Enforcement (ICE) released several infants that were being detained at their facility in Texas. The release came days after immigration advocates filed a complaint with the Department of Homeland Security. The complaint claimed that the infants were being deprived of clean water, sufficient food and adequate medical care. The infants were released to friends and family who could buy them a ticket home or host them on their own.

MEXICO: Mexican journalist and asylum seeker Emilio Gutierrez Soto was ordered to be deported from the United States despite his accounts that his work about corruption has made him a target in Mexico. Yesterday, Soto’s attorney announced that he will be appealing a ruling from an immigration judge denying him and his son asylum. A Feb. 28 order from Judge Robert Hough deemed that Gutierrez Soto’s fears were “merely speculative” because it has been a decade since his articles were published.

JAMAICA: Lawmakers approved investment in the new industry of deep seabed mining. The government has announced that it will sponsor Blue Minerals Jamaica Limited (BMJ), a locally registered company, for the collection of nickel, copper, cobalt and manganese. The government and BMJ will seek an exploration license from the International Seabed Authority, an intergovernmental authority that regulates mineral-related activity in the international seabed. The Ministry of Foreign Affairs and the CEO of BMJ both described deep seabed mining as essential for national development despite the industry’s links to harmful impacts on Indigenous communities and the environment.

COSTA RICA: Yesterday, the judicial police conducted a raid on Roman Catholic church offices in San José, the country’s capital, in their search for information about two priests who have been accused of sexual abuse. The police were searching for information about priests Mauricio Viquez and Manuel Guevara and looking into whether San Jose Archbishop José Rafael Quiros attempted to cover up their sexual abuse cases. Viquez, who was an outstanding international arrest warrant, was expelled from the Roman Catholic church in February after he was accused of abusing two teenagers in 2003. Guevara was arrested last week following a complaint of “improper behavior toward a minor” but has since been released. The police confiscated documents and computers from the city’s metropolitan curia and the national bishop’s conference.

EL SALVADOR: Nayib Bukele, El Salvador’s president-elect, agreed to pay $50,000 in a slander case. Bukele paid and publicly apologized to Eugenio Chicas, a former government minister, who sued Bukele in 2017 after the president-elect said that Chicas raped his underage foster daughter and eventually married her to avoid jail during a television interview. The agreement exonerated the president-elect, who wanted the judicial process to end so that he could focus on governing.

COLOMBIA: Yesterday, President Iván Duque asked the country’s Constitutional Court for decreased restrictions on aerial spraying of illegal coca crops with the weed killer glyphosate, which the World Health Organization has linked to cancer. Former President Juan Manuel Santos banned the use of the herbicide altogether soon after it was labeled a likely carcinogen. The use of glyphosate has been criticized by Colombian farmers who claim the weed killer also harms their legal crops.

VENEZUELA: Yesterday, the International Monetary Fund said it is willing to aid the Venezuelan economy, but needs financial support from the international community. IMF managing director Christine Lagarde described the potential economic rescue as a “monumental” task due to President Nicolás Maduro’s refusal to provide information required for an annual audit. The economy of Venezuela has shrunk by more than half since 2013, according to IMF. The international financial organization has not yet determined whether to recognize opposition leader Juan Guiadó as the legitimate president of Venezuela.

BRAZIL: A government agency for Indigenous peoples has set off on a high-risk expedition in the Amazon to reunite members of an isolated tribe with their relatives. This is the agency’s first major expedition since President Jair Bolsonaro took office, who has stated he will allow mining companies to develop previously protected indigenous territories. The location of the expedition, the Javari valley, is home to at least 11 different indigenous groups and is roughly the size of Hungary. The expedition is supported by Brazil’s army, federal police and health ministry.