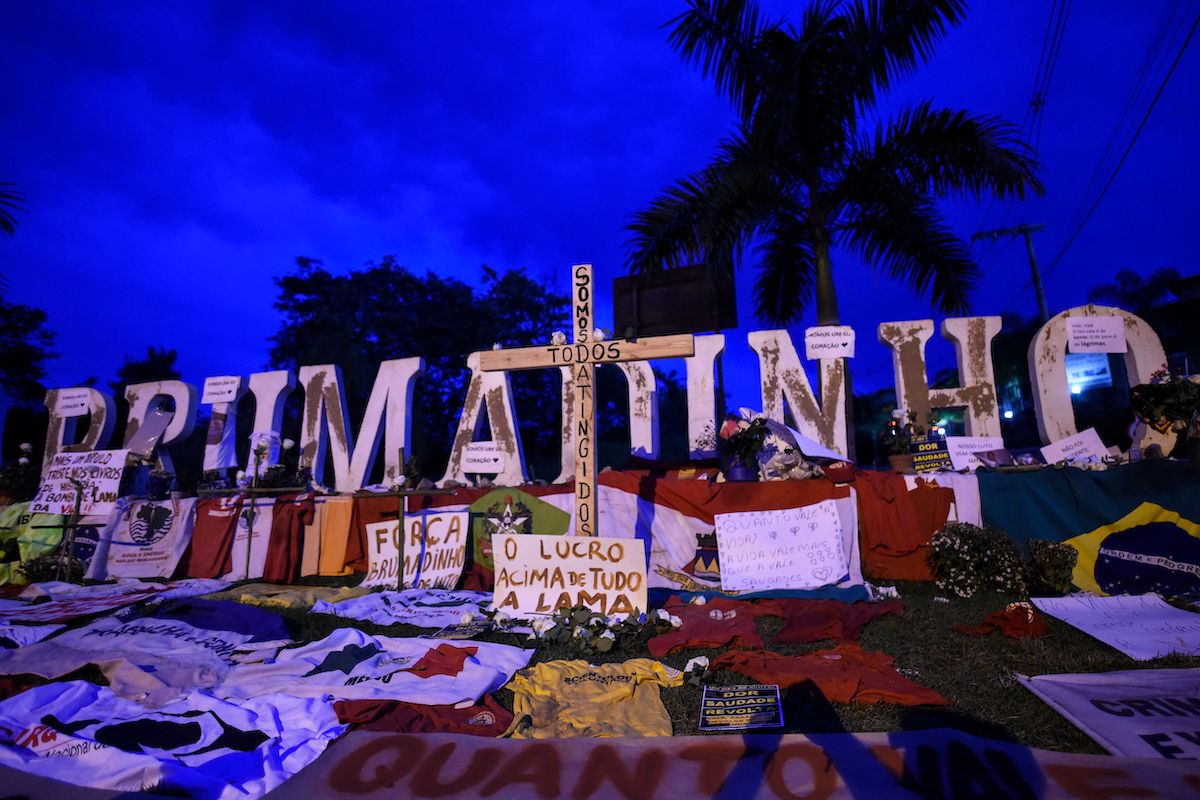 Picture taken during a protest, a month after the collapse of a dam at a nearby iron-ore mine, in the town of Brumadinho, state of Minas Gerais, Brazil, on February 25, 2019. (Photo by DOUGLAS MAGNO/AFP/Getty Images)

People learn by making mistakes. The same is true for firms and society—success depends on being able to internalize lessons and behave differently in future, to avoid repeating the same errors. Firms tend to review their organizational structures and routine practices to flag problems before they occur, or respond quickly to unexpected problems to minimize their impact.

This is apparently not the case with Vale, however—the fifth largest mining company in the world. Vale is the world’s biggest producer of iron ore and nickel and is also responsible for what may be the largest environmental disaster in Brazil’s history, after one of its tailings dams —an embankment which is supposed to hold back a vast reservoir of toxic mining byproducts— collapsed on January 25, 2019 at the Corrego do Feijao mine in southeastern Brazil.

Following the collapse, 186 people were confirmed dead and 122 are still missing. Official data from the Brazilian Environmental Agency says that the mudflow destroyed 270 hectares, of which more than half was native vegetation or protected forest. The swath of natural habitat destroyed is equivalent to 300 football pitches. Tragically, this happened only three years after a similar accident on another of Vale’s dams in the southern Brazilian state of Minas Gerais, near the city of Mariana, which killed 19 people.

By any measure of business sustainability, Brumadinho has been a heavy blow to Vale’s performance and reputation. Since then, the company has had its credit rating downgraded, not to mention suffered crippling damage to its public image.

Vale appointed Fabio Schvartsman as CEO after the Mariana disaster in November 2015. Schvartsman took the job and announced to shareholders, employees and the Brazilian people a strong slogan: “Mariana, never again”. He failed miserably.

Considering Vale’s recent history and the magnitude of these disasters, the corporate response to Brumadinho’s tragedy seems ludicrous. Schvartsman said to the Brazilian parliament, in a session which assessed the condition of other mining dams in Brazil after the collapse at Brumadinho: “Vale is a Brazilian jewel that cannot be condemned for an accident that took place in one of their dams as much, as it was [considered] a tragedy.”

Despite his confidence, questions remain unanswered. Why didn’t the company move a canteen that was below the dam level and in a high risk area, according to the assessment of reports dated October 3, 2018?

The precautionary principle states that if an operation has a risk that might cause severe or irreversible harm to the public or to the environment, that operation must be stopped—even if the likelihood of it happening is low. So why wasn’t this applied?

Since standards clearly hadn’t improved over the last three years, how can Brazilians now trust the safety of other dams? Considering the normal course of an accident, why did sirens allegedly fail to work when the dam collapsed to alert employees and the local community to evacuate?

Vale must account for its operational failure with the same gravity as is the standard in developed countries. The Canadian mining company Imperial Metals is still suffering from the environmental liabilities of the Mount Polley mine disaster in Canada.

There is precedent for CEOs and executives to be forced to resign after serious errors, such as the former CEO of BP, Tony Hayward, who resigned after the Deepwater Horizon disaster that killed 11 people in 2010. Schvartsman’s temporary resignation sends an unclear message about the company’s commitments to the lives of its employees and the communities it operates in.

Vale’s next CEO will need to go beyond Schvartsman’s rhetoric and consider what stricter operating procedures might be necessary. Otherwise, it could only be a matter of time before the next “accident”. There are more than 50 similar dams still functioning under Vale’s operations in Minas Gerais state alone that could be another tragedy waiting to happen.

Vale cannot operate at the expense of lives and environmental destruction. Brumadinho can still be a turning point in the history of the company and show it is able to learn to better avoid accidents and tragedies. It may still transform itself into a more responsible company. For that, however, it will need to urgently embrace change as never before.