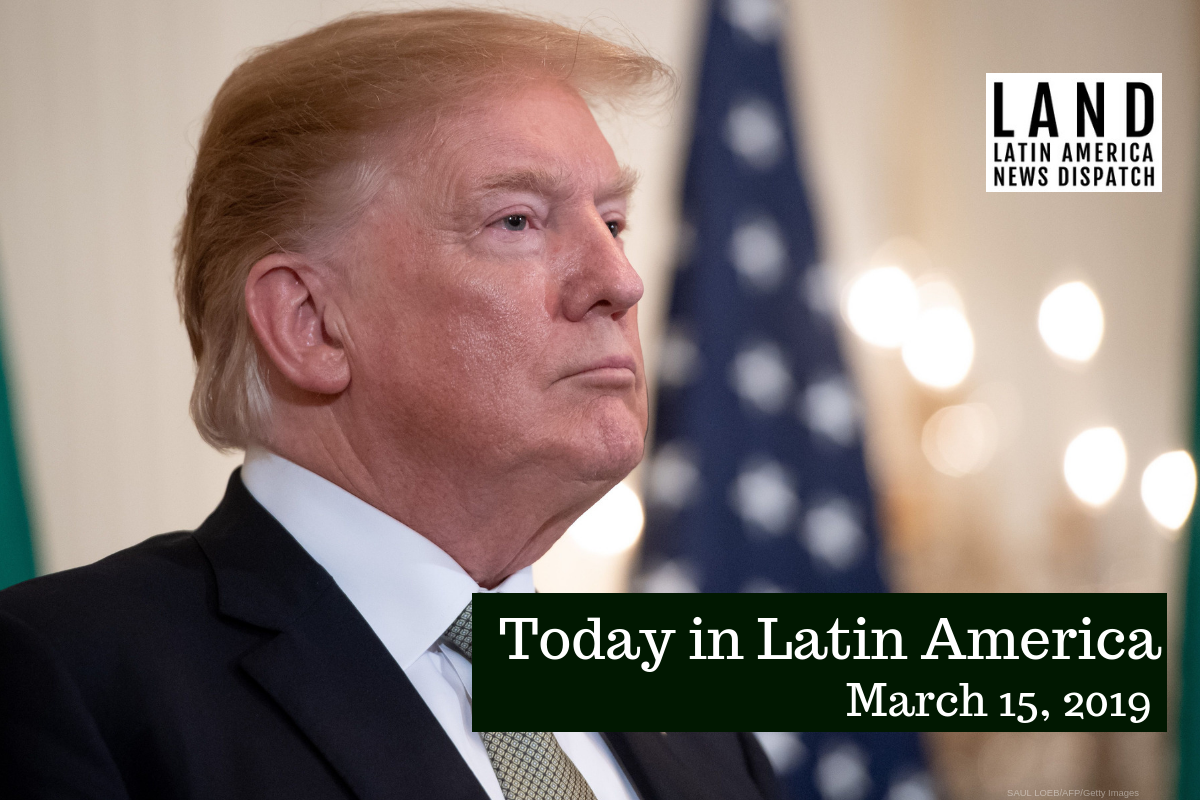 The resolution now heads to the president’s desk, where he is expected to use his first veto. Moments after the vote, the president tweeted, “VETO!” Neither the House nor the Senate has the two-thirds majority needed to override the presidential veto.

MEXICO: On Tuesday, the Sea Shepherd environmentalist group claimed it found the body of a rare vaquita porpoise off the eastern coast of Baja California. The group said the body of the animal was too decomposed to identify and sent it to the authorities. Two Sea Shepherd boats discovered the animal in a net while patrolling for illegal fishing nets. Earlier this week, an international commission of experts filed a report which estimated that just six to 22 vaquitas remain alive. Vaquita porpoises, which live in the waters of the Gulf of California, face greater likelihood of extinction due to illegal fishing.

MEXICO: The Institute for Mexicans Abroad announced plans to give Mexicans living in the United States a say on national policies, organizing public consultation sessions in 13 cities. Sessions are set to begin on Sunday in San Francisco and end in New York on April 13. Officials hope that the forums will help long-time established migrants and recent arrivals without proper documents to contribute ideas and plans for Mexico’s future.

CUBA: Yesterday, Cuban officials again stated that they did not stage an attack against the United States and Canadian diplomats who mysteriously fell ill while serving in Havana. In the presentation, officials argued that many of the cases were of ordinary illnesses that were blamed on an unknown phenomenon due to the high amount of press coverage. The director of Cuba’s Center for Neuroscience, Mitchell Valdes-Sosa said that some of the symptoms began before the controversial phenomenon began in 2016. Some scientists have argued that the diplomats suffered injuries from the sounds of a cricket, not from a sonic weapon attack. Yet, the cause remains unclear. President Donald Trump has called this an attack against diplomats by the Cuban government, and both the U.S. and Canada have removed most of their embassy staff in Cuba following the illnesses.

BARBADOS: The Barbados government plans to introduce legislation that would allow officials to to confiscate property of some reprimanded criminals. Revealed by Attorney General Dale Marshall, the Proceeds and Instrumentalities of Crime Bill 2019 would allow some of these confiscated funds to go to a regional account to finance the Caribbean’s fight against crime and the rest would go to law enforcement in Barbados. The bill would take proceeds from terrorism, drug offenses, corruption, money laundering, racketeering, and more crimes. Barbados enacted a Proceeds and Instrumentalities of Crime Bill in 1990, amended in 1998 and 2002, which only used funds from terrorism and drug crimes.

NICARAGUA: Yesterday, the European Union called for an increase in sanctions against Nicaragua until human right abuses halt and freedoms are restored. The resolution outlined by the EU calls upon the European Union External Action Service and member nations to increase sanctions such as visa bans and asset freezes against individuals responsible for human rights violations in Nicaragua. The resolution came after President Daniel Ortega’s government and the opposition agreed to resume talks, following a hiatus over the weekend during which the opposition demanded that the government free political prisoners. The government has agreed to release some prisoners. The EU’s resolution and the talks within Nicaragua are a result of the massive protests that occured last year during which 325 people died due to the repression of Ortega’s government. The demonstrations called for Ortega to leave office and hold free elections.

VENEZUELA: In the midst of growing tensions between Venezuela and the United States, the last remaining American diplomats left Venezuela this morning. U.S. Secretary of State Mike Pompeo said that although diplomats will relocate, they will continue in their missions of managing the flow of aid and humanitarian assistance to Venezuela. Pompeo highlighted that the United States remains a strong supporter of the opposition leader Juan Guaidó, who has proclaimed himself as interim president, hoping to expel President Nicolás Maduro. “We look forward to resuming our presence once the transition to democracy begins,” he said in a statement.

BOLIVIA: Yesterday, President Evo Morales traveled to Athens, Greece, where he denounced Juan Guaidó, comparing the Venezuelan opposition leader to a colonial viceroy. Morales will meet with Greek Prime Minister Alexis Tsipras today to discuss the crisis in Venezuela. Tsipras’ Syriza party, which supports left-wing parties in South America, has expressed their solidarity with President Nicolás Maduro. Morales was previously in Vienna for a presentation on Bolivia’s anti-drug policy.

BRAZIL: A year ago yesterday Brazilian councilwoman Marielle Franco and her driver, Anderson Mendes, were murdered in Rio de Janeiro, causing international outrage. On Tuesday, former police officers Élcio Vieira de Queiroz and Ronnie Lessa were arrested. That same day, a photograph of Brazilian President Jair Bolsonaro with his arm around Queiroz appeared on social media. The Brazilian magazine Veja reported that the photograph was taken in 2011 and was posted last year on Queiroz’s Facebook page. The profile has since been deleted. In response, Bolsonaro said, “There are photos of me with thousands of police officers.”