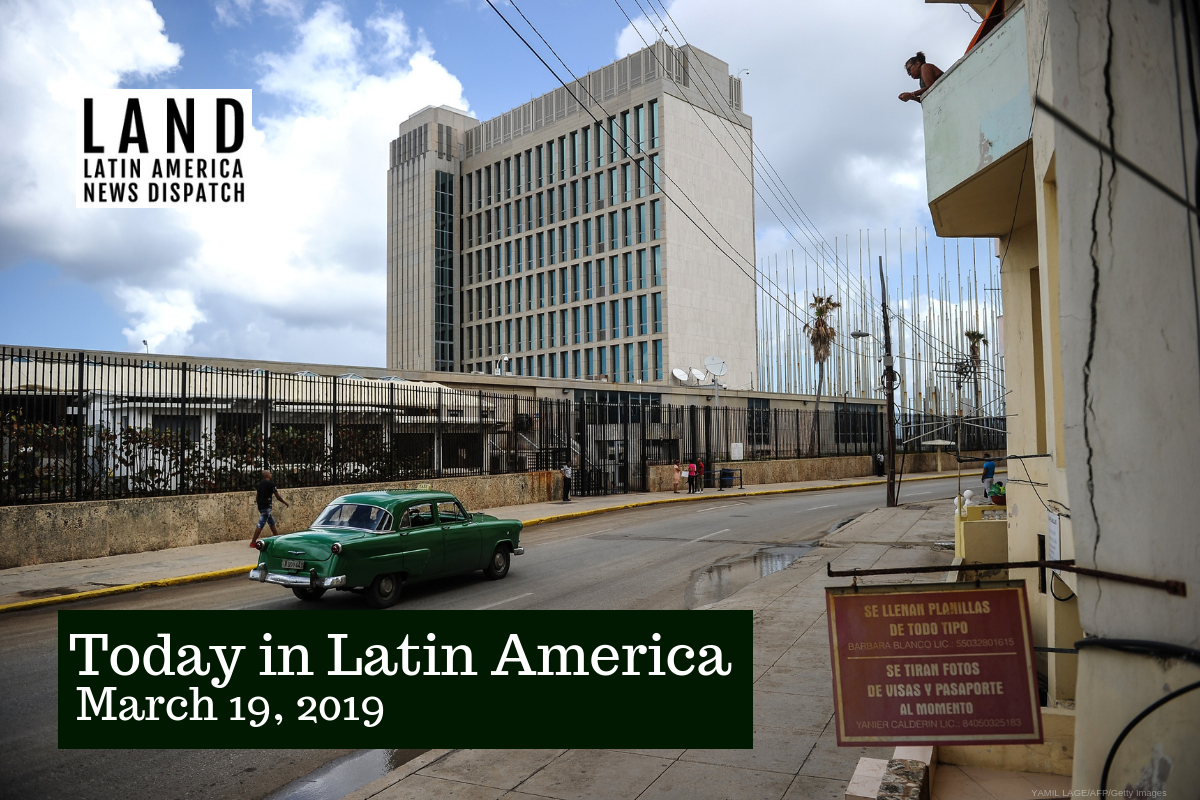 Picture of the U.S. embassy in Havana. (Photo by Yamil Lage/AFP/Getty Images)

Yesterday, Cubans bombarded U.S. diplomats with complaints about new visa restrictions. More than 400 people wrote comments on the Facebook page of the U.S. Embassy in Havana, demanding fairer and more humane diplomatic treatment. The U.S. State Department announced the elimination of the five-year tourist visa on Friday, and the new policy went into effect yesterday.

The recent change will require Cubans to visit a third country —Mexico or Panama— before traveling to the United States. The Cuban private sector has voiced its concern with the recent move, saying it poses a significant hurdle for entrepreneurs in the island. Mara Tekach, the U.S. Embassy’s charge d’affaires, said the change was made to achieve reciprocity between visa rules in the United States and Cuba.

UNITED STATES: Elliot Abrams, U.S. special envoy for Venezuela, and Russian Deputy Foreign Minister Sergei Ryabkov, along with other Russian officials, will meet in Rome this week to talk about the current political situation in Venezuela, according to the U.S. State Department. While Moscow supports President Nicolás Maduro, Washington has recognized opposition leader Juan Guaidó as Venezuela’s interim president, meaning the two countries are on opposing sides of the ongoing political crisis in the Latin American country. According to Russian news wires, Ryabkov said that Moscow plans to “warn the U.S. against using force and other forms of unlawful pressure on the legitimate government in Caracas.”

UNITED STATES: Wanted in his home country, former Peruvian President Alejandro Toledo was arrested in the Menlo Park area near San Francisco on Sunday night on suspicion of public intoxication, according to local authorities. Toledo has resided in California in recent years. He was released without charges on Monday morning, according to a San Mateo County Sheriff’s Office spokesperson. In Peru, prosecutors claim Toledo took $20 million in bribes from Brazilian construction firm Odebrecht while he was president. A $30,000 reward for his capture is offered by officials in Peru.

MEXICO: Billboards in the city of Oaxaca and the surrounding metropolitan area are now displaying convicted criminals as part of a campaign to encourage citizens to denounce crime. One billboard reads, “Luis C., 60 years in prison for femicide.” It includes a mugshot of the criminal alongside a free phone number to dial to report a crime. Yesterday, the secretariat of public security announced that crime prevention meetings, where local and state authorities attempted to develop strategies to reduce crime, have concluded in several Oaxacan districts for now.

HAITI: Yesterday, Haiti’s Lower House censured Prime Minister Jean-Henry Céant after six months in office, with 93 of 103 lawmakers voting to dismiss Céant amid allegations that he failed to improve the quality of life in the country during his administration. Haiti erupted into mass demonstrations in February, demanding the resignation of President Jovenel Moïse. A new prime minister is expected to be named soon.

JAMAICA: Reggae icon Buju Banton offered a sold-out comeback concert in Kingston after serving eight years in a U.S. prison. The first night of his Long Walk to Freedom Tour took place at Jamaica’s national stadium, with an estimated 40,000 people in attendance. Banton was found guilty of attempting to sell cocaine in 2011. A controversial yet beloved dancehall performer, Banton has written songs with positive Rastafarian messages, including the 1994 song “Murderer,” which decried gun violence in Kingston.

HONDURAS: On Sunday night, TV journalist Leonardo Gabriel Hernández was murdered in southern Honduras. Hernández, 54, was shot down one block away from his residence in Nacaome, a small town near the border with El Salvador. According to a freedom of expression organization in Honduras, Hernández was an outspoken critic of government officials, including local authorities like Nacaome’s mayor. The Committee to Protect Journalists issued a statement repudiating the act and demanding that the Honduran government “establish the motive and bring those responsible to justice.”

COLOMBIA: Approximately 1,000 members of Venezuela’s security forces have fled to Colombia since February, accompanied by about 400 of their family members, according to Colombian authorities. In Colombia, they are currently receiving lodging, health care and legal aid. Most began fleeing Venezuela soon after an attempt by opposition leader Juan Guaidó to deliver U.S.-provided humanitarian aid to Venezuela in late February. Some say that pro-Maduro forces threatened their relatives after they left and that their small military salaries were the only source of income for their families. Despite this report, President Nicolás Maduro continues to hold onto the support of prominent Venezuelan military leaders.

BRAZIL: President Jair Bolsonaro visited CIA headquarters yesterday in his first official visit to the United States. Bolsonaro is expected to meet with Trump today to discuss trade and international cooperation on the Venezuelan crisis. An avid supporter of Trump, Bolsonaro comes after many years of distant relations between the two countries. Celso Amorim, who served as foreign minister under former President Luiz Inácio Lula da Silva, said the visit to the CIA put Brazil in an “extremely submissive position.” Bolsonaro’s spokesperson said the visit shows “the priority the government gives to building a solid partnership” with the United States.

BRAZIL: The São Paulo school that experienced a mass shooting less than a week ago has reopened, with staff members meeting to discuss when classes should resume and some students returning to collect belongings they left behind during the attack. Ten people died as a result of the shooting, including several students, administrators and the two killers who took their own lives. Four other individuals are still being treated in different state hospitals. Authorities say the investigation into the shooting is still ongoing.