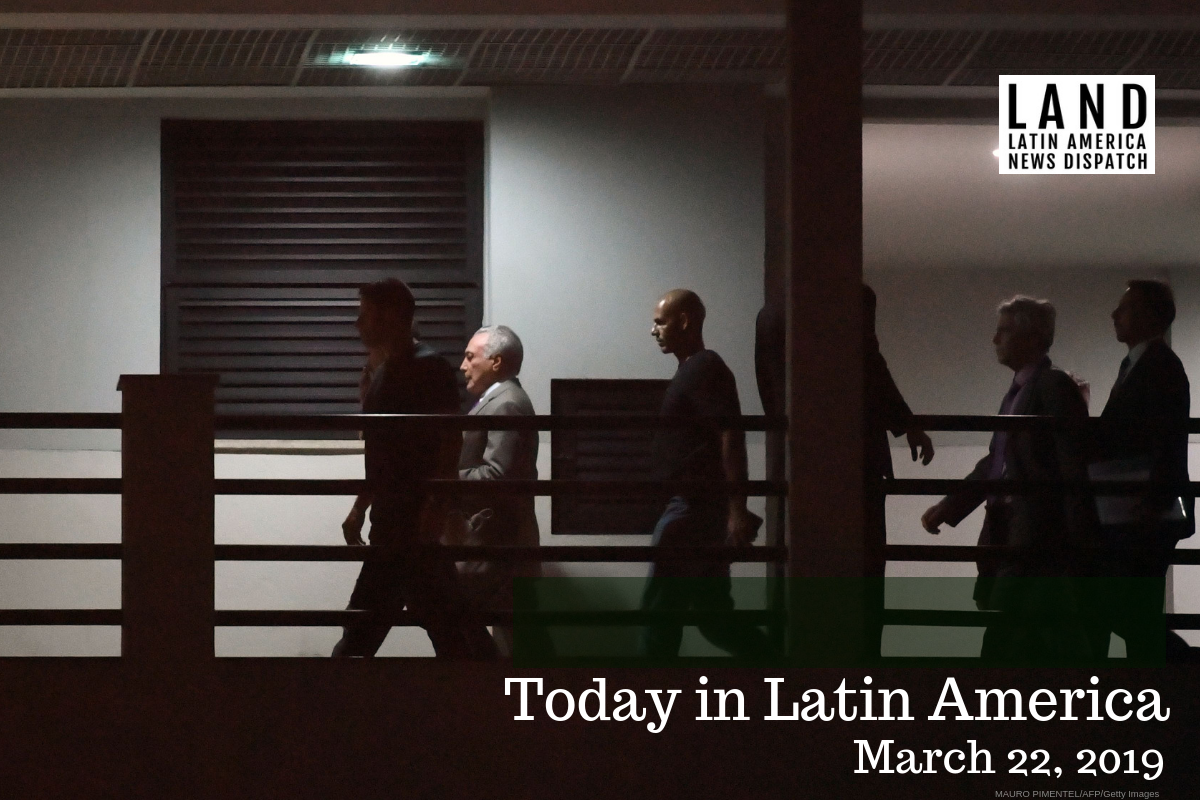 BRAZIL: Yesterday, former Brazilian President Michel Temer was arrested by federal police in São Paulo on corruption charges. Judge Marcelo Breitas issued the arrest warrant for the ex-president and nine others as a part of “Operation Radioactivity,” which is a subset of Operation Car Wash, the largest corruption investigation in Brazilian history. According to the prosecution, Temer received a bribe of $300,000 from a construction company to build a nuclear plant in the southern Rio de Janeiro state.

Temer became president after playing a key role in the impeachment of former President Dilma Rousseff over budget mismanagement. Temer’s own administration was charged with corruption three times by the attorney general. Temer, now without his partial immunity as a government official, remained calm despite the accusations, saying he was “not the least bit worried.”

UNITED STATES: Yesterday, Native American tribes came together in the community of Acoma Pueblo in New Mexico in an effort to protect sacred tribal sites against oil and gas exploration. These areas, surrounded by enormous stone structures, are currently at risk of oil and gas exploration due to the Trump administration’s pro-drilling stance. Although Native Americans and activists have long created a cushion to protect the Chaco Culture National Historical Park, they are encouraging U.S. officials to renovate their drilling plans in order to protect the areas of northern New Mexico and southern Colorado that surround the world heritage site.

MEXICO: In early March, Islas Marías Penal Colony, the last island penitentiary in Mexico, closed after operating for over 100 years. Now, the island will take a new role as a cultural and nature center, named after Jorge Revueltas, a novelist previously imprisoned there. After the penal colony closed, 584 prisoners were relocated to jails in the northern state of Coahuila, while another 68 were either placed in other parts of the country or released. President Andrés Manuel López Obrador celebrated the closure as one of his main achievements in the first 100 days of his presidency. However, decayed infrastructure, poor weather conditions and an eight-hour boat ride from the northern Pacific coast complicate the island’s new role. The Environmental Department said they may offer survival courses in addition to the planned nature walks and arts programs.

MEXICO: On Tuesday evening, President Andrés Manuel López Obrador met with Jared Kushner, a senior advisor to U.S. President Donald Trump and his son-in-law, in the home of Bernardo Gómez, co-executive president of the Mexican mass media company Televisa. López Obrador said that they discussed a possible investment agreement of approximately $10 billion. The investments would fund development in Mexico and Central America in an attempt to reduce immigration to the United States from the region.

HAITI: In the first on-the-record interview by one of the U.S. military veterans arrested in Haiti in February, Chris Osman, a retired Navy SEAL, told the Associated Press that the group was sent to the capital of Port-au-Prince to protect a businessman who was going to sign a $50 million contract at Haiti’s central bank. Osman’s comments contradict parts of a report from The Intercept published on Wednesday. Anonymous sources told The Intercept that the veterans were tasked with escorting presidential aide Fritz Jean-Louis to the central bank so he could transfer $80 million from a Haitian government oil fund to an account controlled by President Jovenel Moïse. The five veterans were arrested on February 17 along with two Haitian drivers and two Serbians. They were driving two vehicles with no license plates but with six automatic rifles, six pistols, two professional drones and three satellite phones inside.

NICARAGUA: The Nicaraguan government says it will release all political prisoners —around 640— within 90 days in an effort to restart peace talks. The political prisoners were arrested in the last several months of protests, which began last April. Talks stalled after police arrested more than 100 protesters last weekend. The opposition had been demanding the release of the prisoners. In exchange, the government is asking that the United States and the European Union to lift sanctions against the government of President Daniel Ortega. Since the protests began last year, 325 people have died, more than 2,000 have been injured, and tens of thousands have fled to neighboring Costa Rica.

GUATEMALA: Presidential candidate Thelma Aldana, a former chief prosecutor, said yesterday that she was not coming back to Guatemala, as had been planned, after authorities issued a warrant for her arrest earlier this week. Aldana has been in El Salvador since Monday. On Tuesday, she formally registered to run in the presidential election in June and a judge issued an warrant for her arrest for alleged embezzlement committed during her time as a prosecutor. Some experts say her registration in the election makes her immune from criminal prosecution, according to Guatemalan law, but others say the law can be interpreted differently, allowing her to be prosecuted. For now, her future is uncertain.

VENEZUELA: A top aide to opposition leader Juan Guiadó was detained in an overnight raid of his Caracas home. The arrest of Roberto Marrero is considered Maduro’s latest move against his self-proclaimed counterpart. Guiadó denounced the attack as a “vile, vulgar kidnapping,” while the U.S. Secretary of State Mike Pompeo promised to “hold accountable those involved.” U.S. authorities believe Maduro’s government is targeting aides and supporters for fear of retaliation on direct moves against Guiadó.

Meanwhile, the United Nations has repeated calls to avoid escalation and invited both sides to open a dialogue for a negotiated solution to the political crisis. Yesterday, the International Monetary Fund said it was not ready to decide whether to recognize Guiadó as the president of Venezuela.

CHILE: South American leaders are meeting today in Santiago to launch Prosur, a new regional bloc set to replace the political group known as Unasur. The governments of Chile and Colombia have been the driving force behind the proposal to replace the political bloc started in 2004 by former Venezuelan President Hugo Chávez when leftist governments in South America were at their height. In sharp contrast, Prosur has attracted conservative leaders, including Brazil’s President Jair Bolsonaro and Argentina’s President Mauricio Macri as well as Venezuelan opposition leader Juan Guiadó, in a move likely to turn away Uruguay and Bolivia from the summit.