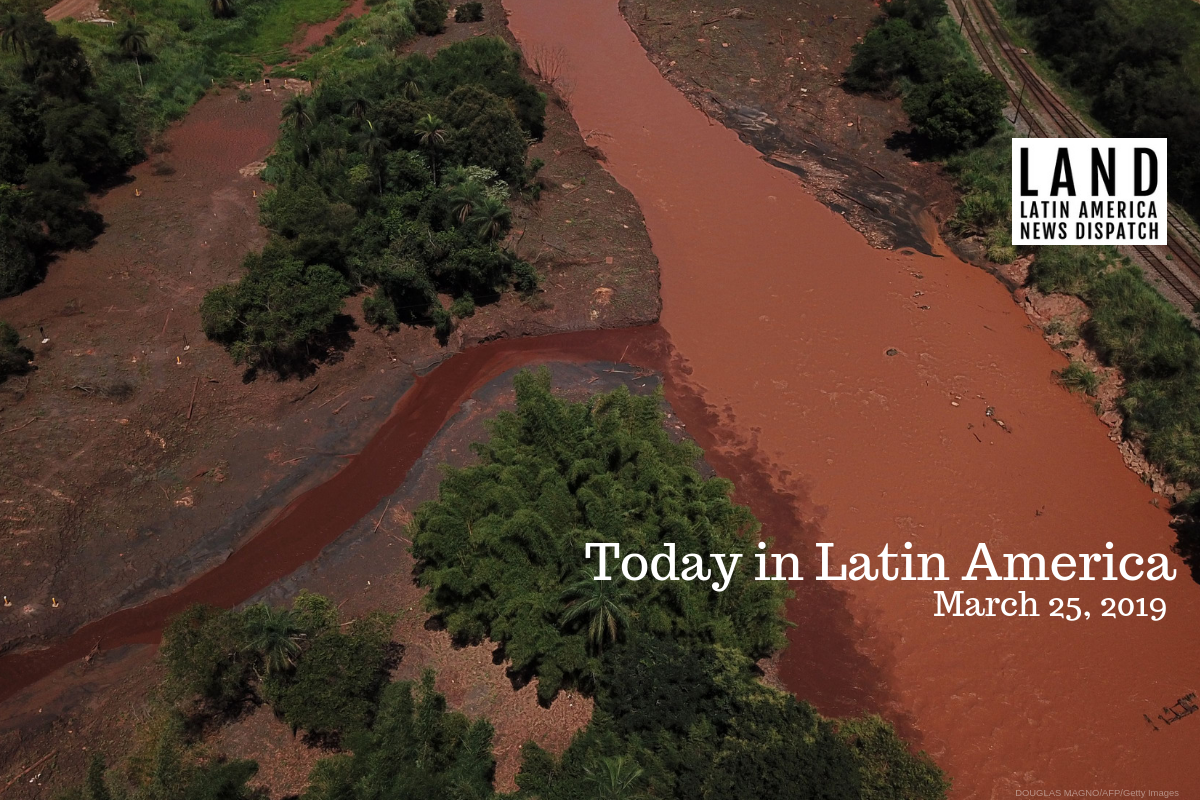 BRAZIL: On Saturday, the mining company Vale called for residents of the state of Minas Gerais to evacuate after reports that a dam in the region could collapse. The company had raised the risk level to the highest grade in the mining town of Barão de Cocais on Friday. The high-risk level indicates that “a rupture is imminent or already happening,” according to Brazil’s mining and energy secretary.

Four hundred and forty-two people were previously evacuated from within a 10-kilometer radius of the dam in February. The evacuation comes after a Vale-operated dam collapsed in the city of Brumadinho in January, burying 154 people alive and killing a total of about 300.

UNITED STATES: On Saturday, 107 Central American migrants seeking refuge in the United States were detained in the border city of Reynosa, Tamaulipas, by Mexican state police. An unidentified gunman fired at police officers and one gunman was killed during the firefight. The Tamaulipas government issued a statement explaining that the police had confiscated a firearm and cartridges, but did not provide details about the gunmen. Additionally, Mexican immigration authorities said 21 migrants were rescued in Coahuila on Saturday. The group had been lost at the U.S. border for seven days after their guide abandoned them.

UNITED STATES: The U.S. Treasury Department imposed new sanctions on Venezuela on Friday. The sanctions target the Venezuelan state-owned bank, Banco de Desarrollo Económico y Social de Venezuela (BANDES), and four financial institutions under its control. Treasury Secretary Steven Mnuchin stated that the sanctions were a response to the arrest of Roberto Marrero, chief of staff to opposition leader Juan Guaidó. “The regime’s continued use of kidnapping, torture, and murder of Venezuelan citizens will not be tolerated by the U.S. or the international coalition that is united behind President Guaidó,” Mnuchin said in a statement released Friday.

MEXICO: Mexican President Andrés Manuel López Obrador (AMLO) has increasingly welcomed meetings with Evangelical Christian leaders. In the past month, AMLO has received Evangelical pastor Arturo Farela twice, first on Feb. 21 and again on March 13. Christian ministers from the National Confederation of the Christian Evangelical Church have joined AMLO and Farela at these meetings. “God has opened his giant doors to us for we have been invited to collaborate with the Federal Government through social programs,” Farela stated, according to El País. These encounters have been criticized by many as challenging Mexico’s identity as a secular state.

PUERTO RICO: The mayor of San Juan, Carmen Yulín Cruz, announced on Friday that she is running for governor of the U.S. territory. Known for her outspoken disapproval of U.S. President Donald Trump, especially after Hurricane Maria, Cruz is a member of the Popular Democratic Party and a co-chair of Vermont Senator Bernie Sanders’ presidential campaign. A supporter of the island’s commonwealth status, she says that if elected, she will hold a constitutional assembly in order to determine the future political status of Puerto Rico.

NICARAGUA: The Nicaraguan government, which began negotiations to release 802 political prisoners detained since last April’s anti-government protests last week, signed a timetable for future releases on Friday. No prisoners have yet been released, but President Daniel Ortega has agreed to release inmates within 90 days, contingent on the removal of external sanctions. On Sunday, Pope Francis prayed for the success of the peace talks: “I accompany the initiative with prayer and encourage the parties to find a peaceful solution for the good of all as soon as possible,” he said.

CHILE: On Saturday, Pope Francis accepted the resignation of and replaced the archbishop of Santiago following investigations into a sex abuse scandal. Cardinal Ricardo Ezzati resigned from the country’s most significant archdiocese and was succeeded by a temporary replacement, the current bishop of Copiapo, Chile, Monsignor Celestino Aos Braco. On Friday, an appeals court permitted the prosecution to further investigate Ezzati for the alleged cover-ups after rejecting Ezzati’s motion to dismiss the case. The former archbishop faces charges of concealing many claims of abuse, all of which he has denied.