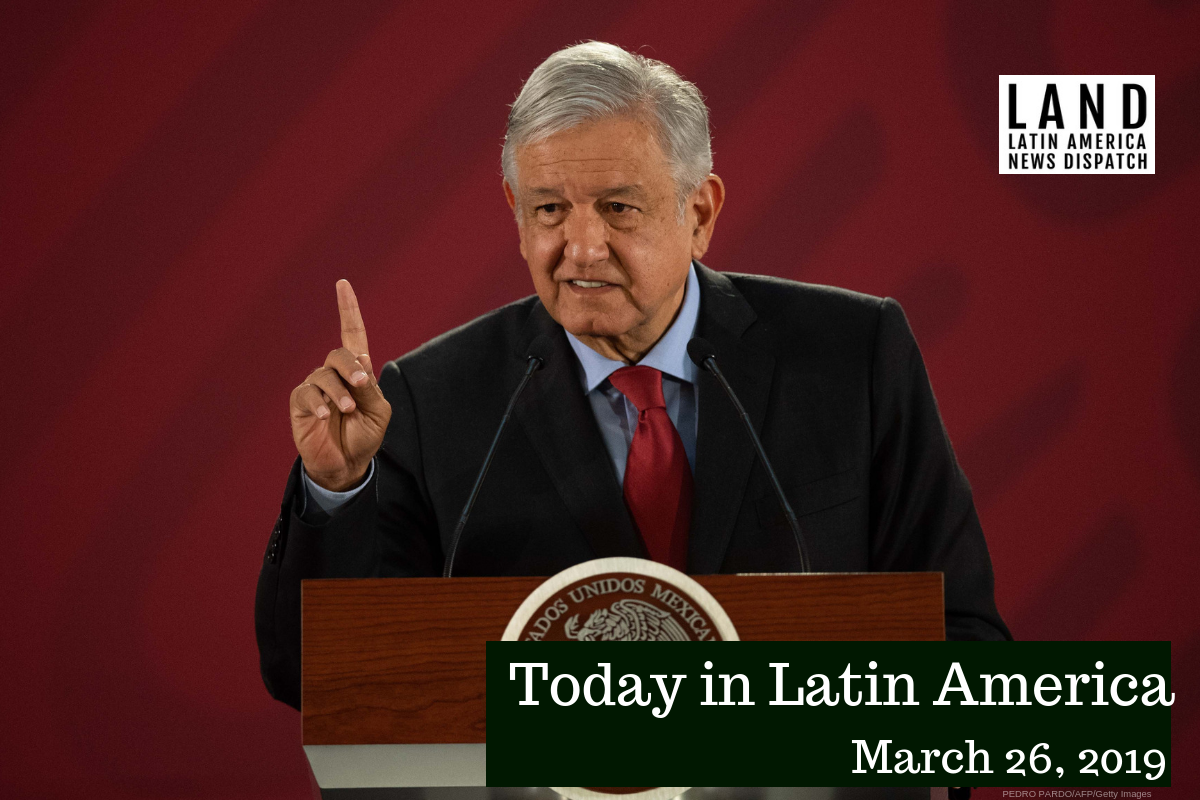 MEXICO: President Andrés Manuel López Obrador (AMLO) released a video yesterday requesting a formal apology from King Felipe VI of Spain for the conquest and murder of Indigenous Mexicans, calling them historic violations of human rights. He also sent a letter to the Pope. Representatives of the Spanish government said the country “firmly rejects” the argument presented, and that the conquest should not “be judged in the light of contemporary considerations.”

Standing in front of the Mayan ruins of Comalcalco in Tabasco in the video, AMLO also announced his intention of establishing 2021 as the year of reconciliation for the two countries, 500 years after conquistador Hernán Cortés’s first battle with the Chontal Maya. AMLO said that before reconciliation, Mexico is also asking for forgiveness for its own role in the repression of Indigenous people.

MEXICO: After announcing “unlimited” funds and manpower put towards identifying thousands of missing and unidentified remains, President Andrés Manuel López Obrador resumed the search for missing activist Rosendo Radilla yesterday. In 2009, the Inter-American Court for Human Rights ruled that the Mexican military had a hand in his 1974 disappearance after Radilla was arrested at a military checkpoint, and in 2011 the Mexican government admitted responsibility.

UNITED STATES: According to a U.S. State Department spokesman, Secretary of State Mike Pompeo has warned Russia to reconsider its continued presence in Venezuela. Pompeo told Russian Foreign Minister Sergei Lavrov that the U.S. “would not stand idly by” as Russian planes land in the country. As Russia remains an ally to Venezuelan President Nicolás Maduro and the United States continues to support opposition leader Juan Guaidó, both countries fear military intervention by the other.

PUERTO RICO: Yesterday, in another effort to bolster and modernize its infrastructure, Puerto Rico’s legislation passed a bill that aims to transition its entire energy use to renewable energy by 2050.

HONDURAS: After recognizing Jerusalem as Israel’s capital, Honduras vowed to open a commercial office in the Middle Eastern country. President Juan Orlando Hernández announced this decision in a speech at the American-Israel Public Affairs Committee’s (AIPAC) 2019 Policy Conference in Washington, D.C. Following the lead of the United States, which vowed to move its Tel Aviv embassy to Jerusalem in May 2018, Honduras joined Guatemala and Paraguay in their diplomatic push for closer ties with both the United States and Israel.

EL SALVADOR: The government of the Netherlands is seeking to bring justice for four Dutch journalists killed in El Salvador during the Central American country’s armed conflict. A new investigative documentary called “In Cold Blood” showed how that Col. Mario Reyes Mena, a brigade commander, planned an ambush that culminated in the executions of television journalists Jan Cornelius Kuiper, Koos Koster, Johannes Willemsen and Hans ter Laan in 1982. The documentary states that Reyes Mena, 79, currently resides in Washington and is no longer protected by a 1993 amnesty law. At least 30 other journalists were killed during El Salvador’s civil war.

COLOMBIA: Thousands in Colombia partook in Indigenous protests on Sunday as part of an attempt to get President Iván Duque to acknowledge Indigenous rights and agreements. Despite repression and death threats, native Colombians have expanded the protests, which include road blockades, during the month of March. In response, Duque sent Interior Minister Nancy Patricia Gutierrez to negotiate with Indigenous representatives in Santander de Quilichao, a mostly Indigenous municipality in Colombia’s southwest region, last week. Duque had called for an end to the protests before agreeing to any talks, but gave in when more Indigenous communities began blocking roads. Native Colombians’ concerns include government failure to abide by over 1,000 agreements, to regularly implement a peace process with former FARC guerrillas on Indigenous land, and to include Indigenous people in Duque’s National Development Plan.

VENEZUELA: Although President Nicolás Maduro declared a major victory when electricity was reinstated in Venezuela earlier this month, power outages in Venezuela have resumed. According to reports on social media, a new power outage that started around 1 p.m. (1700 GMT) reached as many as 16 of Venezuela’s 23 states yesterday. The blackouts are affecting the subway system in Caracas, Venezuela’s capital. Opposition leader Juan Guaidó has blamed the blackouts on years of government incompetence, while Maduro said that the past outages were due to United States sabotage.

BRAZIL: Brazilian Judge Antonio Ivan Athie has ordered that former President Michel Temer be let out of jail, noting that his release is not a risk to an ongoing investigation of corruption charges. Temer and seven others were jailed Thursday due to suspected involvement in what has come to be known as the “Carwash Probe,” a money laundering scheme. Although Judge Marcelo Bretas, who was involved at the time of arrest, argued that those involved needed to be held so they could not destroy evidence, Athie stated that “preventative detention” was not part of Brazil’s legal order. Brazil’s federal police has not yet said when Temer will be released.