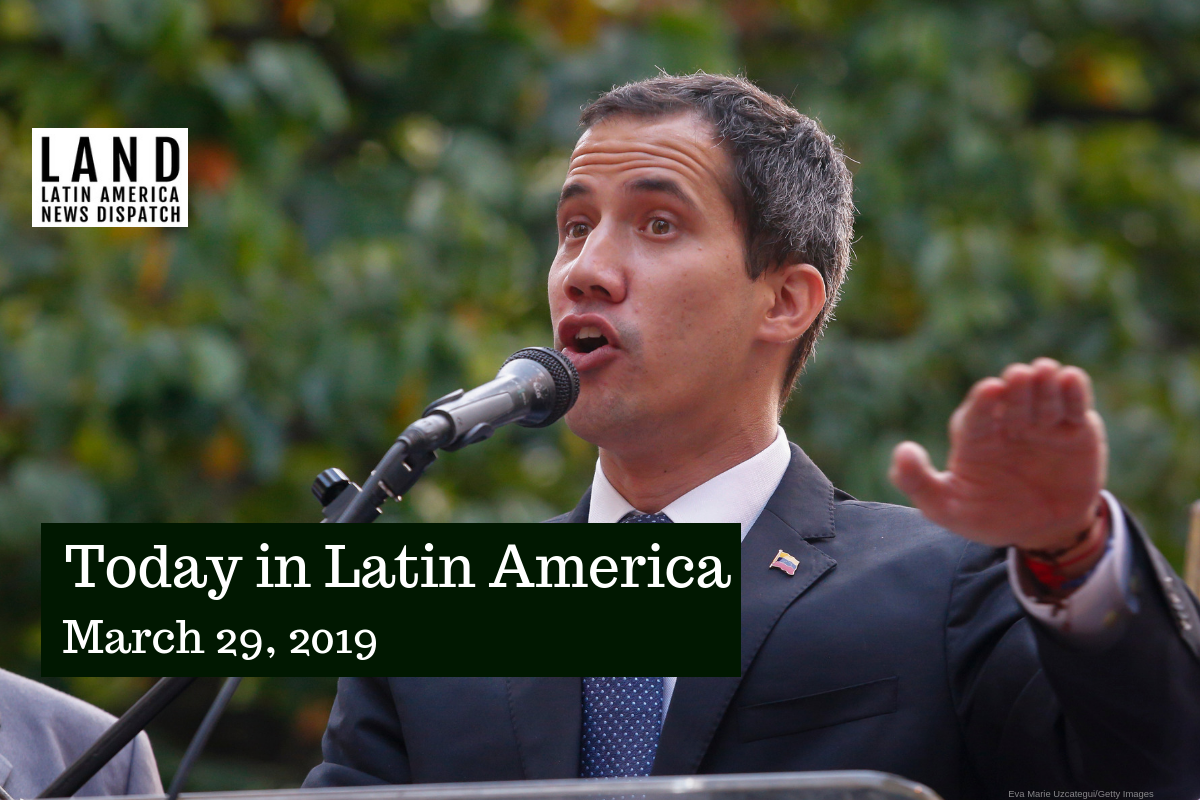 Venezuelan opposition leader Juan Guaidó speaks during a meeting with supporters after he was barred from public office for 15 years on March 28, 2019 in Caracas, Venezuela. (Photo by Eva Marie Uzcategui/Getty Images)

VENEZUELA: Yesterday, opposition leader Juan Guaidó was barred from public office for 15 years by the Venezuelan government. In an announcement on state television, state comptroller Elvis Amoroso cited alleged inconsistencies in Guaidó’s financial records and accused him of receiving gifts from foreign governments. Soon after the announcement, Guaidó dismissed the measure and made clear that it would not deter him from attempting to drive President Nicolás Maduro from power.

UNITED STATES: Yesterday, President Donald Trump tweeted that Mexican and Central American leaders were doing “nothing” to prevent migrants from fleeing to the United States.

Mexico is doing NOTHING to help stop the flow of illegal immigrants to our Country. They are all talk and no action. Likewise, Honduras, Guatemala and El Salvador have taken our money for years, and do Nothing. The Dems don’t care, such BAD laws. May close the Southern Border!

His accusation came after administration officials met with Mexican officials in Miami on Tuesday and traveled to Honduras on Wednesday to sign a border security agreement with Central American leaders. The agreement seeks to expand intelligence sharing and combat human trafficking. In his tweets, Trump also suggested a shut down of the U.S.-Mexico border, a longstanding threat.

The U.S.-Mexico Border: In a press conference in El Paso, Texas on Wednesday, United States Customs and Border Protection officials claimed they have reached a “breaking point” due to the influx of migrants. Hundreds of migrants are currently being held by Border Patrol behind a chain link fence under the Paso Del Norte International Bridge in the border city. On Thursday morning, El Paso’s Mayor Dee Margo confirmed that migrants were now housed in temporary holdings underneath the highway bridge. The processing facility in El Paso is reportedly at a 395 percent capacity.

CUBA: Yesterday, Cuba and Google signed a deal to create a cost-free connection between their networks, which would allow Cubans to connect to content on Google servers faster and reduce government costs. The move to improve the island’s connectivity is dependent on Cuba being able to physically connect to an undersea fiber-optic cable that will be introduced in the future. Cuba currently relies on one fiber-optic connection with Venezuela that has not been able to sufficiently accommodate the growing number of internet users on the island. No clear timeline for the project was established.

PUERTO RICO: A bipartisan group of lawmakers introduced a bill yesterday to make Puerto Rico the 51st state without holding a referendum. The Puerto Rico Admission Act, introduced by Florida Rep. Darren Soto, requires that the island be admitted into the union within 90 days of the law’s passage. President Donald Trump has stated that he is against Puerto Rican statehood and recently expressed that the island received too much disaster aid after Hurricane Maria. During the past five years the Puerto Rican government has held two referendums regarding the island’s status in 2012 and 2017 where voters chose statehood, but the ability to change the island’s status rests with Congress.

GUATEMALA: On Wednesday night, a truck plowed into a crowd and killed at least 18 people and injured 18 in the western town of Nahualá. The crowd had gathered on the Pan-American Highway in response to a separate crash that occurred earlier that night when the truck driver crashed into them and tried to flee the scene. A suspect was later detained and is in police custody. The Guatemalan government declared three days of national mourning for the victims.

COLOMBIA: The International Committee of the Red Cross said yesterday that violence has increased in some areas of the country since the 2016 peace deal with the FARC. According to the organization, mass displacement increased by more than 90 percent last year as the paramilitary dissidents fight for control of drug trafficking routes in the western provinces of Choco and Cauca. The ICRC also said that landmine victims raised by more than 280 percent last year.

CHILE: Yesterday, a Chilean cardinal went before a local prosecutor as a defendant in an ongoing investigation into the sex abuse and cover up scandal in the Catholic Church. The cardinal, Javier Errazuriz, was removed from his informal Cabinet by Pope Francis on Saturday after Errazuriz was accused of covering up clerical abuse in at least 10 cases. Errazuriz’s appearance before the prosecution follows a recent ruling from an appeals court in Chile that the Catholic Church must compensate the victims of one of the country’s most well-known priests.

BRAZIL: On Wednesday night, mining company Vale stated that a total of four of its dams could collapse at any given moment and raised the risk level to the highest degree near three additional dams. Last week, the company raised a similar alert in rural areas near a dam in the city of Barao de Cocais, after evacuation orders were issued in those same areas last month. The announcement comes only two months after a rupture of a company dam caused the death of over 200 people in the town of Brumadinho.