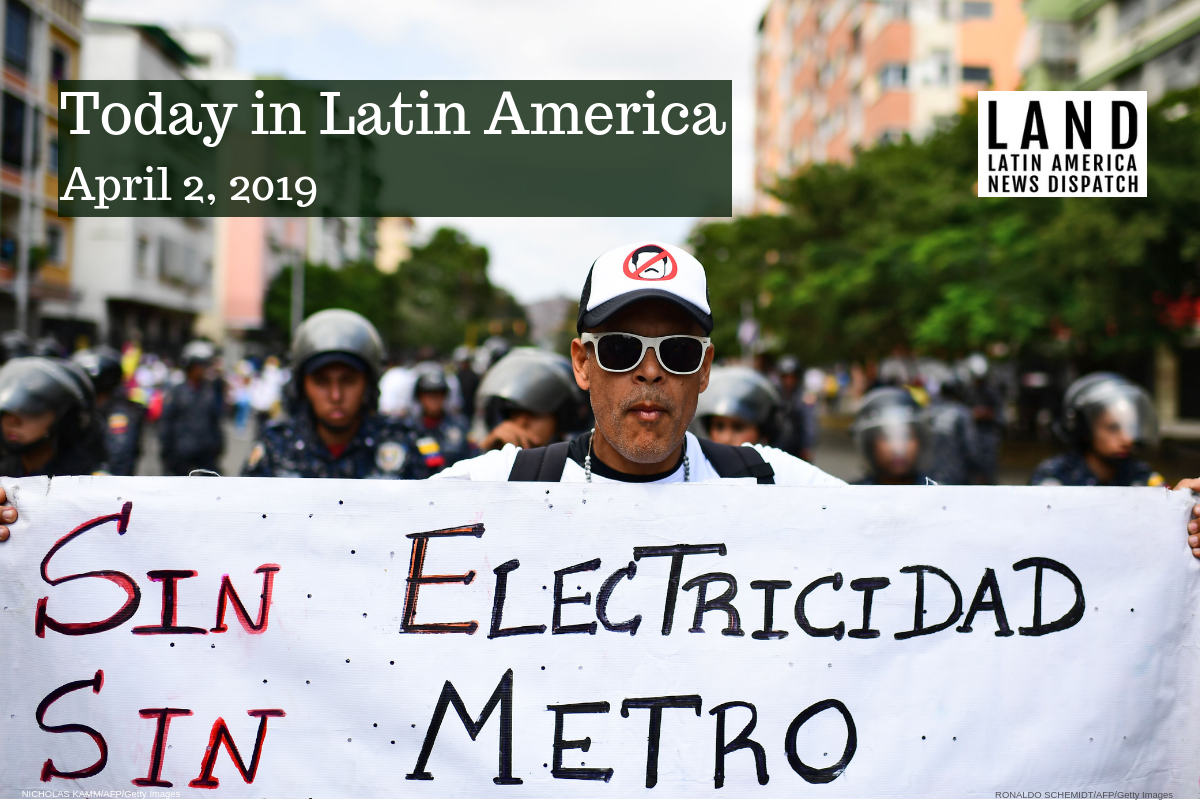 A demonstrator with a sign reading 'No electricity, no subway' in Caracas on March 9, 2019. (Photo by Ronaldo Schemidt/AFP/Getty Images)

VENEZUELA: The government of President Nicolás Maduro announced a 30-day plan to ration energy. The measures, presented by Maduro on Sunday, lacked details but intend to balance power consumption with the current generation and transmission capabilities of Venezuela’s crippled energy sector. The oil-rich country has suffered continuous energy shortages affecting the entire country after a massive blackout on March 7. Maduro blamed the crisis on sabotage and cyber attacks originating from the United States.

Self-proclaimed interim president Juan Guaidó blamed government mismanagement as the cause of the crisis and called on Venezuelans to protest in the streets every time the power and water service is cut. At an event at a Caracas university yesterday, Guiadó told his supporters, “We must unite now more than ever. We must mount the biggest demonstration so far to reject what’s happening.”

MEXICO: Mexican musician Armando Vega Gil, bass player for Botellita de Jerez, was found dead yesterday morning in an apparent suicide. Just before his death, Vega Gil posted a note on his social media accounts saying he would take his own life in a “radical declaration of innocence” after he was accused of sexual assault by a young woman. The #MeTooMúsicosMexicanos movement is the latest offshoot off the #MeToo movement, which exploded across Mexico this past month.

MEXICO: In a news conference on Monday, President Andrés Manuel López Obrador (AMLO) said he “preferred love and peace” to U.S. President Donald Trump’s threats to close the U.S.- Mexico border. AMLO has refused to engage with Trump’s threats over the border. Instead, he says the Mexican government will deal with the Central American crisis “serenely, calmly, without a commotion and with great prudence and responsibility.” The government has issued some humanitarian visas to migrants, and says it will begin to provide transport back to the migrants’ countries of origin if they choose to return.

U.S.-MEXICO BORDER: Amid wide concern about the economic consequences of President Donald Trump’s threat to close the U.S.-Mexico border, his administration announced that at least 2,000 U.S. border inspectors will be reassigned to help process a new wave of migrants. As of Monday, 750 inspectors had already been reassigned. The inspectors generally oversee cargo and vehicles crossing the border, and many worry that the reassignment will further slow the movement of goods between the two countries.

CUBA: Cuban physicians stationed in Algeria might face an abrupt return to the island, following social unrest in the North African country. Yesterday, Algerian President Abdelaziz Bouteflika announced he will resign from his 20-year presidency on April 28, imperiling the trade agreements between the two nations. Cuba started importing oil from Algeria in 2017 to mitigate the shortfall experience at the onset of the Venezuelan crisis. In return, Cuba has been sending medical professionals to Algeria, but regime change might result in physicians returning to the island, as has recently happened in Brazil.

PUERTO RICO: The United States Senate voted on a disaster aid bill that positioned Puerto Rico as the object of bipartisan tensions. The bill, proposed by Republican senators, was blocked by their Democratic counterparts on the basis that it excluded block-grant funding for housing development in Puerto Rico. This impasse will prevent $13.5 billion from being disbursed to North Carolina, Texas and Florida, states also damaged by hurricanes and natural disasters.

GUATEMALA: The top electoral court barred former Attorney General Thelma Aldana from running for office. A 4-1 majority vote declared Aldana’s candidacy as null and void for irregularities committed during her tenure as the country’s attorney general. Although this decision would mean that the former prosecutor would not be able to run in the June 16 elections, Aldana and her Seed Movement party can still appeal to Guatemala’s Supreme Court and the Constitutional Court.

COLOMBIA: Interior Minister Nancy Gutierrez will restart negotiations today with leaders from protesting Indigenous communities. Talks had previously broken down when the Indigenous guard detained a soldier attempting to cross roadblocks on the Pan-American Highway. The Indigenous communities of the Cauca state have been demonstrating for 23 days. Leaders are demanding that the government uphold its previous agreements with various minority populations. Since the protests began, the marginalized Afro-Colombian populations of the Pacific and Indigenous communities from eastern Colombia have joined the protest. Gutierrez plans to discuss productive projects, land rights, health coverage and education.

PARAGUAY: The ancestral land of the Ayoreo Indigenous people in Paraguay’s Gran Chaco region was legally recognized after a 26-year struggle. A delegation of Ayoreo leaders traveled to Asunción to receive the title of 18,000 hectares of land that the government had bought from a private company. Since 1969, the Ayoreo people had been killed and forced from their land by missionaries, disease and deforestation at the hands of cattle ranchers. The Ayoreo community rejects contact with outsiders and are the last uncontacted Indigenous population in the Americas outside of the Amazon.