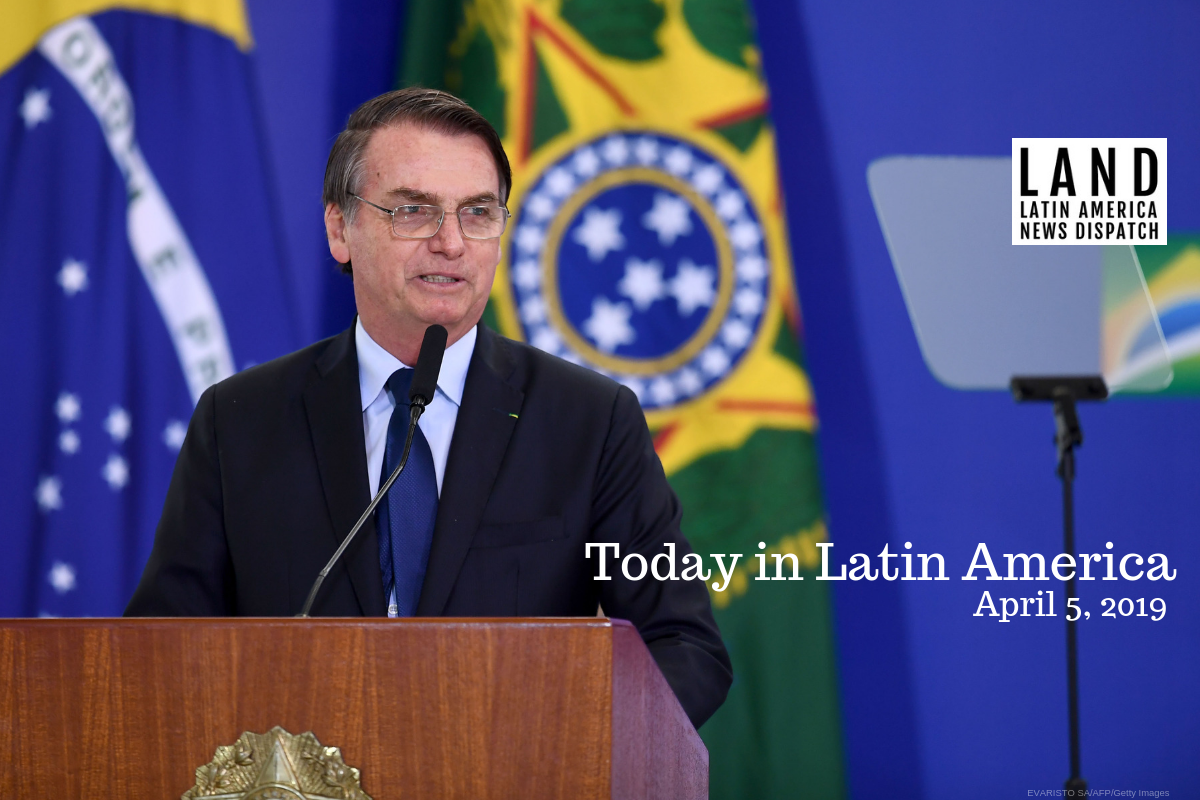 BRAZIL: Education Minister Ricardo Vélez said school textbooks will be revised to give a positive angle to the 1964 coup that began a 21-year military dictatorship. Vélez told magazine Valor Económico that revised textbooks would allow children to gain a “true and real idea” of the dictatorship that resulted in the execution of hundreds and the torture of thousands. The education minister’s comments come days after far-right President Jair Bolsonaro commanded the military to honor the 55th anniversary of the coup.

MEXICO: A week-long wildfire has consumed over 300 acres of the El Triunfo Biosphere Reserve in the south of Chiapas, Mexico. The flames began spreading on March 26 in a mountainous region in the municipality of Mapastepec, where an estimated 250 firefighters have been working to put out the fire since. The five to seven hours it takes to reach the area via ground transportation has hindered efforts to contain it, calling for additional collaboration on behalf of combat helicopters, according to the National Commission of Natural Protected Areas (Conanp). As of yesterday, the fire was 90 percent contained. The El Triunfo wildfire arose just two days after a nearly 1000-acre fire had been put out at the neighboring La Encrucijada Biosphere Reserve, a coastal region also in Chiapas.

UNITED STATES: President Donald Trump’s latest efforts to tighten United States-Mexico border security include potential tariffs on car imports from the neighboring country unless it does more to stop drug trafficking and the migration of undocumented individuals. Although Trump has backed down on a recent threat to shut down the border, Trump told reporters at the White House on Thursday, “I don’t think we’ll ever have to close the border because the penalty of tariffs on cars coming into the United States from Mexico at 25 percent will be massive,” regarding his future strategy.

U.S.-MEXICO BORDER: United States Customs and Border Protection (CBP) announced yesterday that construction of a “levee wall” fence spanning 13 miles could start right away or in the near future, in partnership with the U.S. Army Corps. of Engineers (USACE). CBP stated that while construction will mimic past construction of levee walls, it will also incorporate surveillance cameras, resurfaced roads, new lighting and other technology. The new levee system will be built on federal land and CBP said it will expand construction as real estate frees up in the area. This marks the third levee project in the Rio Grande Valley, Texas, following a November contract of $167 million to build eight miles of levee wall in nearby regions.

CUBA: Yesterday, the Cuban government announced that it will reduce the length and cut back the number of circulation dates of state-run newspapers due to paper shortages starting on Friday. Several newspapers will cut their length in half, from 16 pages to eight pages. Cuba imports newsprint from countries including China, but with the country’s cash-flow and shortage crisis, the government has taken measures to curtail imports. The last major cutbacks of Cuban newsprint occured after the fall of the Soviet Union during a time period where Cuba suffered extreme shortages.

BARBADOS: This week, the Barbados Attorney General and Minister of Legal Affairs announced a week-long gun amnesty to take place between April 7 and April 13 during which gun owners will be able to turn in their weapons without prosecution. The amnesty will follow the passage of the Bail (Amendment) Bill 2019 which makes it harder for people charged with murders or firearm offences to qualify for bail. Barbados has had previous gun amnesties with the latest one being in 1998.

GUATEMALA: Forty-four Nobel Prize laureates signed a letter calling on the Guatemalan government to protect democracy and human rights in their country. The document cited deteriorating conditions in the country, and the signatories not only called on Guatemalan authorities to preserve democracy and peace but also called on the international community for support. Guatemalan Indigenous rights activist and 1992 laureate Rigoberta Menchú was among the signatories. Guatemala has struggled with corruption and impunity since its civil war with a UN anti-corruption investigation being expelled from the country this year.

VENEZUELA: The collapse of the country’s health system requires an intervention by the United Nations, according to a joint report released yesterday by the John Hopkins Bloomberg School of Public Health and Human Rights Watch. Researchers requested UN Secretary-General Antonio Guterres to declare the crisis in Venezuela a humanitarian emergency, which would trigger UN and international resources. The two organizations in the report claimed that the Maduro administration has worsened the crisis by refusing to release information related to the crisis, including health and nutrition data. As part of the report, more than 150 health care professionals and Venezuelans in need of medical care or food were interviewed.

PERU: The chief forensic officer of the northern region of Loreto said yesterday that a British missionary and environmental activist died before his body was set aflame at a hostel in the region. The forensic expert Francisco Moreno ruled out fire as the cause of death in the case of Paul McAuley due to the lack of carbon dioxide in the the missionary’s blood. On Tuesday, McAuley, 71, was found dead in the hostel he helped found in the Amazon city of Iquitos. Moreno said that further tests are being conducted.