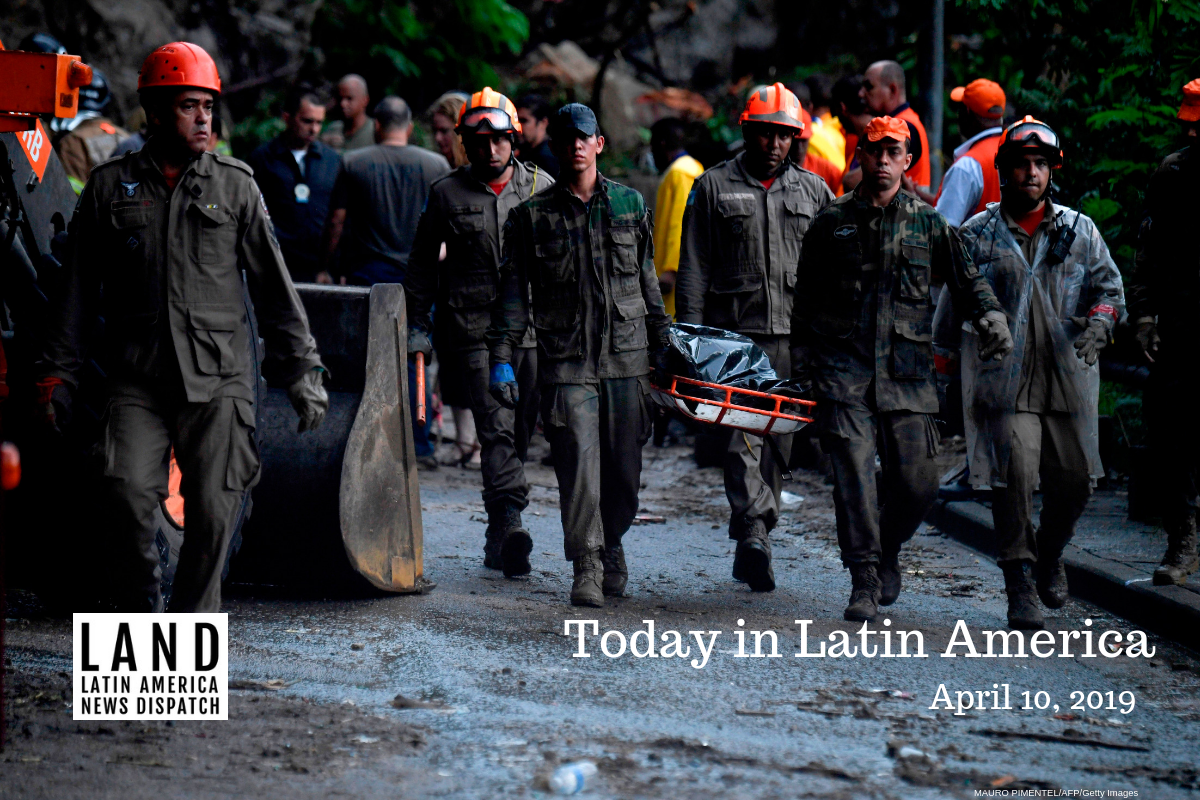 BRAZIL: In Rio de Janeiro, heavy rains killed 10 civilians and devastated parts of the city yesterday. The rains began on Monday evening and resulted in widespread flooding that disproportionately affected hillside favelas. Parts of Rio have been identified as “high geological risks,” and the city has faced other catastrophic weather events in recent months. The city’s mayor, Marcelo Crivella, acknowledged the city’s lack of preparedness and complained about insufficient federal funding. Crivella has left Rio at a “crisis” emergency level.

At the same time, Brazil’s science and academic research sectors are reeling after a major freeze of government financing. Facing economic recession, the Bolsonaro administration has locked down science expenditures as “contingency funds” that can only be spent if other sources of funding are found. This year’s budget for Brazil’s Ministry of Science, Technology, Innovation and Communication (MCTIC) is expected to be a third of what it was five years ago.

MEXICO: According to the annual report from the Institute for Economics and Peace, the economic impact of violence in Mexico increased 10% in 2018 and the level of peace fell 4.9%. This translated to a loss of 5.16 billion Mexican pesos, or about $273 million. The indicator that contributed the most to the economic impact was homicide, which increased 14% in 2018. For the first time, the most violent state in the country was Baja California.

UNITED STATES: As rumors of a leadership purge at the Department of Homeland Security (DHS) intensify, President Donald Trump denied overhauling DHS yesterday, telling reporters, “Nobody ever said I was cleaning house.” However, an official told Reuters that the department’s acting No. 2 official, Claire Grady, was rumored to be leaving Tuesday, along with previously named General Counsel John Mitnick and U.S. Citizenship and Immigration Services Director Francis Cissna.

HAITI: On Tuesday, Haiti’s President Jovenel Möise confirmed that the current acting prime minister, Jean Michel Lapin, will remain in his post as Haiti’s new prime minister. This comes only a month after his predecessor, Jean-Henry Céant, was fired by the Lower Chamber of Deputies after only six months in office. Lapin’s administration continues to face the widespread unrest of Haitians demanding better living conditions and a resignation of the head of state, caused by high living costs and insecurity.

HONDURAS:  Honduran marine biologists fear that legally sanctioned “incidental” fishing of sharks is still harming marine biodiversity in the region. Gabriela Ochoa, a specialist in conservation and biodiversity, has been investigating the impact of shark fishing in the La Mosquita region, home to Indigenous people from the Garifuna community. In 2011, the Honduran government declared the country’s waters as shark sanctuaries but amended the law in 2016 to allow the consumption of “incidentally” caught sharks. Indigenous customs and conservation laws have clashed, however, and illegal fishing continues under the guise of “incidental” captures. In the weeks that lead up to the Easter holiday, for example, up to 100 sharks are fished daily to supply local cuisines.

COLOMBIA: Indigenous protesters have ended their blockade of the Pan-American Highway after President Iván Duque committed $260,000 to Indigenous communities. After a standstill in negotiations arising from Attorney General Néstor Martínez’s accusation that Indigenous leaders were threatening Duque’s life, the two parties convened in a private 40-minute meeting. Early yesterday, Duque refused to leave a community building in the town of Caldano to meet publically with the Indigenous delegation out of fear for his safety. Initially, the Indigenous delegation also refused to send a smaller group to negotiate with Duque, but eventually agreed. The negotiations ended with the removal of the country-wide blockade, but Indigenous leaders say they will look towards future protests.

VENEZUELA: Opposition leader Juan Guaidó’s representative was accepted into the Organization of American States (OAS) yesterday. With 18 votes in favor, nine against and seven abstentions, Gustavo Tarre Briceño was declared Venezuela’s representative to the international organization during a permanent council session to discuss the situation in Venezuela. The multilateral organization, which includes the United States, has been pushing for the removal of President Nicolás Maduro’s government.

In a sign of deeping problems, Maduro removed another eight tons of gold from the country’s gold reserves. The move highlights the regime’s need for hard currency in the face of harsh U.S. sanctions. According to a government official, Venezuela has lost 30 tons of its gold reserves since the beginning of the year with only 100 tons left.

ARGENTINA: Argentina and Colombia were selected yesterday by CONMEBOL, the South American soccer body, to co-host the regional Copa America in 2020. The 2020 soccer tournament will be the first with a new format that will see two hosts, 10 South American teams and two guest teams. Colombia will host countries from the north while Argentina will host countries from the south. The new format boasts 38 matches,12 more than have been played in the Copa’s past.