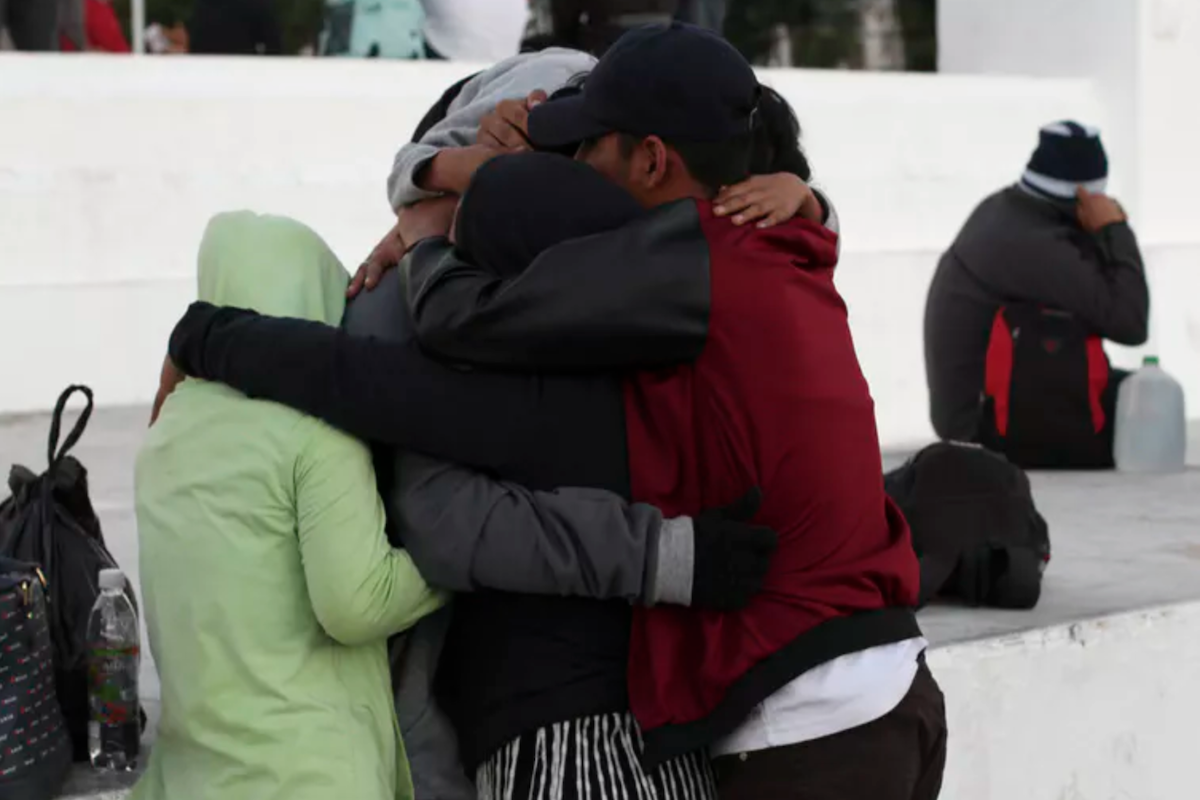 A man hugs his family before leaving for the U.S. border with a migrant caravan from San Salvador, El Salvador, January 16, 2019. (AP/Salvador Meléndez)

The crisis along the U.S. southern border led directly to the forced resignation on April 7 of Homeland Security Secretary Kirstjen Nielsen, whom President Donald Trump believed ineffectively managed the situation.

As Trump promises to “shut down the border” and “punish” the governments of Honduras, Guatemala and El Salvador for failing to stem the exodus from their countries, the question of why so many families are making the difficult and dangerous journey north appears more urgent than ever.

I have spent much of the last decade conducting on-the-ground fieldwork in this region, and along the migration paths through Mexico, seeking answers to this question.

The region’s extreme poverty and violent impunity are central factors driving this migration.

Yet every migrant’s story is unique. Some simply seek the chance to earn enough money to ensure a better future for themselves or their children. Others flee persecution at the hands of gangs, organized crime or corrupt state officials. For others, insecurity and poverty are so intertwined that drawing them apart becomes impossible.

Extreme poverty and inequality haunt the region. Today, about half of all Central Americans (and two-thirds of the rural populations of Guatemala and Honduras) survive below the international poverty line.

Meanwhile, throughout the 21st century, Honduras, Guatemala and El Salvador have consistently counted among the most murderous nations in the world.

Many Central American migrants are simply desperate to find work that pays enough to feed their families. U.S. asylum law provides no relief for these “economic refugees.”

I met Roberto Quijones in a migrant shelter in the Mexican state of Tabasco, about 25 miles north of the Mexico’s southern border with Guatemala, in late 2017. We spoke as he soaked his blistered feet and tried to mend his busted shoes with duct tape.

Roberto is from a rural town in northwestern El Salvador near the border with Honduras and Guatemala, and had been out of work for two years. For more than a year, he and his wife and their 2-year-old daughter had been living with an aunt. Their welcome had worn thin.

“She’s family,” Roberto said, “but you know you get to a moment when not paying rent isn’t possible anymore. Even if they are family.”

And even for those who can find work, extremely low wages cannot cover families’ basic needs, destroying hope for a better future.

“I can make 200 lempiras, a day working” —the equivalent of $10— said Marvin Otoniel Castillo, a father of three from Tegucigalpa, Honduras. We spoke in late 2016 beneath a bridge in Veracruz, Mexico, waiting to hop a train to continue northwards.

“So your whole life is falling deeper into debt,” Marvin continued. “That’s why I came. So I could send my oldest child to school so he wouldn’t have to live like his father.”

Running for Their Lives

Other migrants have been targeted by criminal organizations that operate with stunning impunity in Central America.

Criminal organizations derive much of their power from their deep links with government agents; it’s sometimes impossible to identify where the state ends and the underworld begins. Such connections also make understanding who is responsible for any given murder difficult.

Transnational gangs like the Mara Salvatrucha, or MS-13, play an important role in this violence. Estimates of how much they contribute to overall crime rates vary between countries and are hampered by extremely low prosecution rates and a lack of reliable data.

However, gangs are responsible for the region’s most widespread and brutal extortion rackets, which create deep psychological and economic strife for poor Central Americans while also causing countless murders.

The upshot is that many Central Americans trying to enter the United States are literally running for their lives.

That includes Pedro, whose uncle and two brothers were gunned down on a crowded Guatemala City street in 2015 because, he believed, his cousin had stolen from a drug-trafficking organization. Like others I’ve interviewed who are fleeing violent persecution, he requested anonymity to protect himself and family still living in Guatemala.

Pedro said he moved with his wife and two daughters to another part of the city to escape detection. But then police discovered his 13-year-old daughter’s body in an alleyway.

Her assailants had raped her, burned her with cigarettes and knifed her to death. Pedro said that no one would tell him who did it, but he fled with his family to ensure their safety.

Or Alejandra, from a mid-size city west of the Guatemalan capital, who told me she was in her final year of a nurse training program and spending Christmas holidays with family when she witnessed her uncle gunned down in his front yard while he strung up party lights.

The uncle, she said, had refused to pay extortion money to a criminal group run by active and former police officers. The next day, Alejandra received threatening messages on Facebook. She didn’t want to leave the country, but moved in with a friend in another town and tried to lie low.

A few weeks later, Alejandra claimed, the group sent a kid with a handgun to kill her. She escaped by throwing herself from her motorbike. That’s when she decided to give up her career and flee Guatemala.

The Price of Staying

For financial or personal reasons, many Central Americans are unable or unwilling to flee in the face of such threats. That can exact a steep price.

One evening in late 2018, a woman named Sofia said that members of MS-13 caught her when she was walking home from work in San Pedro Sula, Honduras. She’d moved to the city months before with her 12-year-old daughter, because her husband, Pablo, had fled the country to escape the gang’s threats.

Pablo had worked driving a produce truck, but then MS-13 killed his boss for refusing to pay extortion. Gang extortion is believed to be a leading cause of murder in Honduras and though the majority of the country’s extortion victims are poor, they pay about $200 million a year to protect themselves.

The family’s funds were just enough to get Pablo out of Honduras. Maybe, they hoped, if he was gone the gang would leave the family alone. Once in the States, he could send money home.

The plan didn’t work. Four gang members forced Sofia into a car, drove her to the countryside, beat her and raped her repeatedly. “This is what will happen to your daughter,” they shouted at her over and over again, “if you don’t pay us what your husband owes.”

The images and stories of Central Americans caged at the border awaiting processing expose how the U.S. immigration system was never designed to deal with this many people fleeing these kinds of problems.

In the hopes of getting better treatment at the border, some migrants have resorted to pretending to be part of family units, or lying about their age.

This kind of “gaming the system” may be ethically questionable, but viewed from the perspective of survival, it makes perfect sense.

Such strategies speak most of all of collective desperation, begging a question posed by many of the Central American migrants I have met over the years: “If you were me, what would you do?”