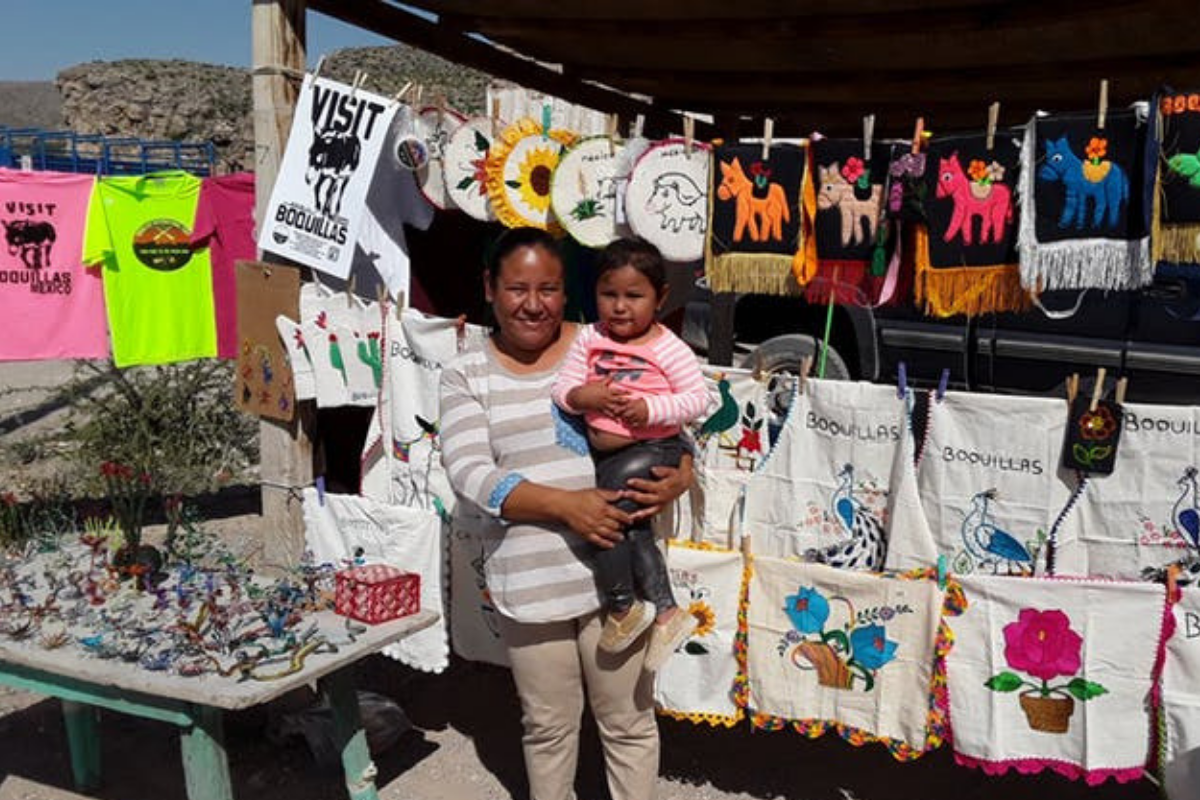 Lucia Orosco holding her daughter, Arely, in Boquillas. Much of the embroidery created here reads ‘no el muro’ (no wall). (Photo by Matthew Moran/CC BY-ND)

The tiny Mexican town of Boquillas del Carmen sits nestled between the Sierra del Carmen Mountains and the Rio Grande. Its Chihuahuan Desert location is strikingly beautiful, with green vegetation along the river, the brown soil of the surrounding desert and pink mountain cliffs creating splendid color contrasts.

I have been taking students to this magnificent landscape for 20 years—mostly to Big Bend National Park in Texas, just a mile north of Boquillas. My colleagues and I have also studied the ecological and economic value of this habitat, one of the most biodiverse and ecologically important desert regions in the world.

Recently I returned to study the ecotourism and conservation potential of Boquillas. In the process, I learned about a local vision for the border that is strikingly different from the prevailing U.S. view.

Here the Rio Grande forms the line between the United States and Mexico. The river is an ecological gathering place that draws humans and wildlife. For Boquillas residents, the idea of building a wall here is sacrilegious. As Lilia Falcon, manager of a local restaurant, said to me, “We have friends on both sides of the river, we want these interactions to continue.” Her husband, Bernardo Rogel, was more succinct: “We love both countries.”

Boquillas was originally a mining town, with local deposits of silver, lead and zinc that attracted prospectors. By the early 20th century, 2,000 people lived there and a thriving industry was exporting ore.

That boom turned to bust, and by the end of World War I the mines were closed. The town nearly disappeared in the 1960s, but in 1999 when I first visited there, it had about 200 residents. They made their living from cross-border tourism, with U.S. visitors to Big Bend National Park entering Mexico via a legal but unofficial border crossing.

After the September 11, 2001 terrorist attacks, however, the United States closed all of these informal crossings. Overnight Boquillas lost its income source, ruining livelihoods and jeopardizing years of effort by residents and government officials to build cooperative border relations.

The nearest place to get supplies was now a 300-mile round trip over rough roads deep into rural Mexico. Just three miles away on the U.S. side, gas, food and services in Big Bend National Park’s Rio Grande Village campground were now inaccessible. Relatives who were citizens on opposite sides of the border were separated, 115 miles from the nearest legal crossing point.

After more than a decade of lobbying by residents, the U.S. government created a “remote” passport facility, where people crossing the border could present their documentation by phone to a border agent located in El Paso. Boquillas reopened and merchants and guides returned. In 2018 more than 11,000 visitors crossed over from the United States.

Today Boquillas residents are working again to teach visitors about this part of Mexico, and ecotourism companies are expanding. People here envision a future for the border in which respect, cooperation and shared economic gain will create a prosperous and sustainable future for communities on both sides.

It is obvious to me that people in Boquillas love their town and are hopeful about the future. “I want to show visitors the beauty of my home and to have a more prosperous life for my family,” Lacho Falcón, a local guide whose family owns the only grocery store in town, told me on my most recent visit as we hiked into Boquillas canyon, its massive vertical walls gleaming in soft morning light.

I have heard that sentiment repeated many times as I have gotten to know more people in the town. Thanks to economic activity from tourism, “We have been able to buy a vehicle, improve our house, and most importantly, send our oldest daughter Wendy to college,” said Lucia Orosco. She sells crafts to help support her family, which includes husband Adrián, who manages the ferry crossing over the Rio Grande, and their three children.

Canoeing the Rio Grande is a favorite tourist activity. The river cuts through spectacular canyons, supports abundant wildlife and provides water for this thirsty land. I spoke with Ernesto Hernández Morales from Vera Cruz, Mexico and Mike Davidson from Terlingua, Texas about the river’s potential to unify their countries. As partners with Boquillas Adventures, a Mexican registered ecotourism company that focuses on natural and historic interpretation, they are working to expand sustainable tourism opportunities in nearby protected areas, hiring local residents as guides.

“We see our work as more than a business,” said Hernández Morales. “It’s an opportunity to show Mexico and the U.S. working together for security and prosperity.” Davidson concurs: “It is our goal to provide our guests a high-quality, safe experience…and offer them a glimpse of daily reality on this part of the border.”

Chalo Diaz, a local guide who takes visitors on river trips, is excited about his work. “Boquillas is a beautiful town where you can visit friendly people. Now that the border has reopened, we have improved it and are connected to the world,” he told me.

In 2011 Mexico and the United States signed a cooperative agreement to conserve the spectacular Chihuahuan Desert landscape. This initiative builds on proposals dating back nearly a century to create a cross-border international peace park.

American black bears, mountain lions, bighorn sheep and a host of smaller animals, as well as over 400 species of birds, move across this landscape. Studies show that conserving this region requires maintaining free movement for wildlife. Researchers warn that building a border wall through the area could threaten thousands of plant and animal species by preventing them from moving between patches of the best habitat.

Currently Boquillas is the only access point where people can cross between the protected areas in this region. This makes it critical to future conservation success. People in Boquillas believe that building a border wall would sever this connection, causing hardship and insecurity on both sides.