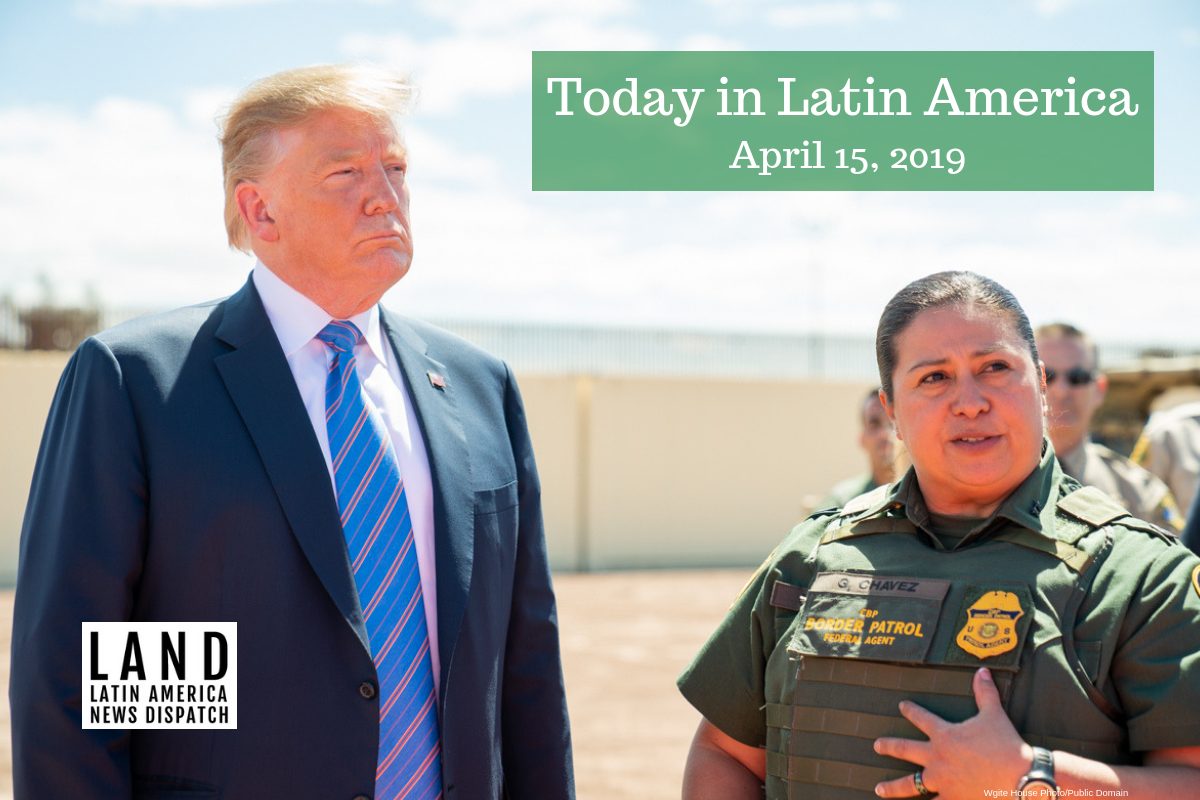 UNITED STATES: During a press conference held on Friday, President Donald Trump threatened to send migrants detained at the border to sanctuary cities across the United States. Trump tweeted that he “is giving strong consideration” to a logistical effort that would relocate apprehended migrants to locales that have limited cooperation with federal immigration agencies. The intention is to release detainees in Democratic strongholds like San Francisco. Over the weekend, administration officials defended the proposal. Conversely, members of the Democratic Party slammed the White House initiative over the legality of the proposal, calling for bipartisan and comprehensive immigration reform.

Due to the fact that Democrats are unwilling to change our very dangerous immigration laws, we are indeed, as reported, giving strong considerations to placing Illegal Immigrants in Sanctuary Cities only….

MEXICO: Over the weekend, Mexico deported over 200 Honduran nationals. The National Migration Institute (INM) said Sunday that migrants were flown from Veracruz, Mexico, to San Pedro Sula, Honduras. The INM called their stay “irregular” and said many of the migrants were families with underage children. The Mexican government stopped issuing humanitarian visas at the border with Guatemala earlier this year.

MEXICO: About 350 migrants broke the locks on a gate at the Guatemalan border Friday, where they joined a larger group of migrants headed toward the United States. Mexico’s national immigration institute said the migrants were “hostile” and “aggressive,” and accused them of attacking local police in Metapa, a small border town outside of Tapachula. Several hundred migrants have been waiting at the immigration offices in Tapachula for documents that would allow them to travel to the U.S. border to seek asylum.

MEXICO: Mexican President Andrés Manuel López Obrador said Saturday that the U.S. government said they would help finance a train line connecting tourist spots in Mexico’s Yucatán Peninsula. López Obrador said that the message came from President Trump by way of U.S. Secretary of Commerce Wilbur Ross, who was visiting Mérida over the weekend. The U.S. pledged $4.8 billion in aid to southern Mexico. The railway project itself is expected to cost $7.2 billion and would be financed over six years as a joint private-and-public investment venture.

HAITI/DOMINICAN REPUBLIC:  Police authorities in the Dominican Republic arrested the founder of a Haitian orphanage, Michael Geilenfeld, following accusations of molesting seven boys. Geilenfeld, a U.S. citizen, had originally fled to the neighboring Dominican Republic to avoid prosecution in Haiti. Geilenfield denies having molested children, and blames these “false” accusations for the loss of millions of dollars in donations to his charity, Hearts with Haiti.

CUBA: The U.S. Coast Guard intercepted 20 Cubans trying to illegally enter the U.S. between Thursday and Friday, 41 miles south of Key West. Among the detainees are two men that were taken into U.S. custody, one of which is suspected of smuggling. Nine Cubans were given to Bahamian Immigration authorities to be deported back to the island. Throughout 2019, over 6,200 Cubans have been recorded at points of entry in the U.S.-Mexico border.

NICARAGUA: Canada openly disclosed that it had suspended its financial aid last August to Nicaragua in response to the country’s humanitarian crisis. Brittany Fletcher, a spokeswoman for the Canadian Foreign Ministry, said that the monies stopped being disbursed in August 2018, following a recommendation made by Ottawa. Canada was one of the top five donors to Nicaragua, having provided up to $20 million per year.

VENEZUELA: On Friday, the former head of Venezuela’s military intelligence was arrested in Madrid by Spanish police over a U.S. drug warrant. Maj. Gen. Hugo Carvajal was a close adviser of the late Hugo Chavez but recently declared his support for opposition leader Juan Guaidó. New York prosecutors alleged Carvajal organized the trafficking of around 5,600 kilograms of cocaine from Venezuela to Mexico in 2006. According to an unnamed spokesperson for a Spanish court, Carvajal denied the allegations in court on Saturday and the judge ruled that the former general will be kept in custody while a court reviews a U.S. extradition request.

BRAZIL: President Jair Bolsonaro plans to auction oil fields off the coast of the northeastern state of Bahia against the advice of the country’s environmental institute. IBAMA, which enforces the sustainable use of natural resources, recommended against the auction in seven out of the 42 oil fields offered up in March by the Brazilian Petroleum Agency. IBAMA analysts wrote that a spill could reach the coast and nearby island chain within two days and ruin marine wildlife habitats.

CHILE/ARGENTINA: On Thursday, the Indigenous Mapuche people requested the International Criminal Court (ICC) hold the governments of Chile and Argentina accountable for acts of genocide and crimes against humanity. Mapuche chief Lonko Juana Calfunao led the delegation to The Hague and testified to the court that the two nations invaded their land in the 18th Century, killing numerous tribe members in the process. The delegation of the largest Indigenous group in Chile also pointed to recent injustices. In November 2018, an unarmed Mapuche youth was shot and killed by an army counterinsurgency unit in the southern Chilean region of Aracuanía, leading to protests and criticism of Chilean President Sebastian Piñera’s militarization of the south of the country. Large demonstrations are expected this week.