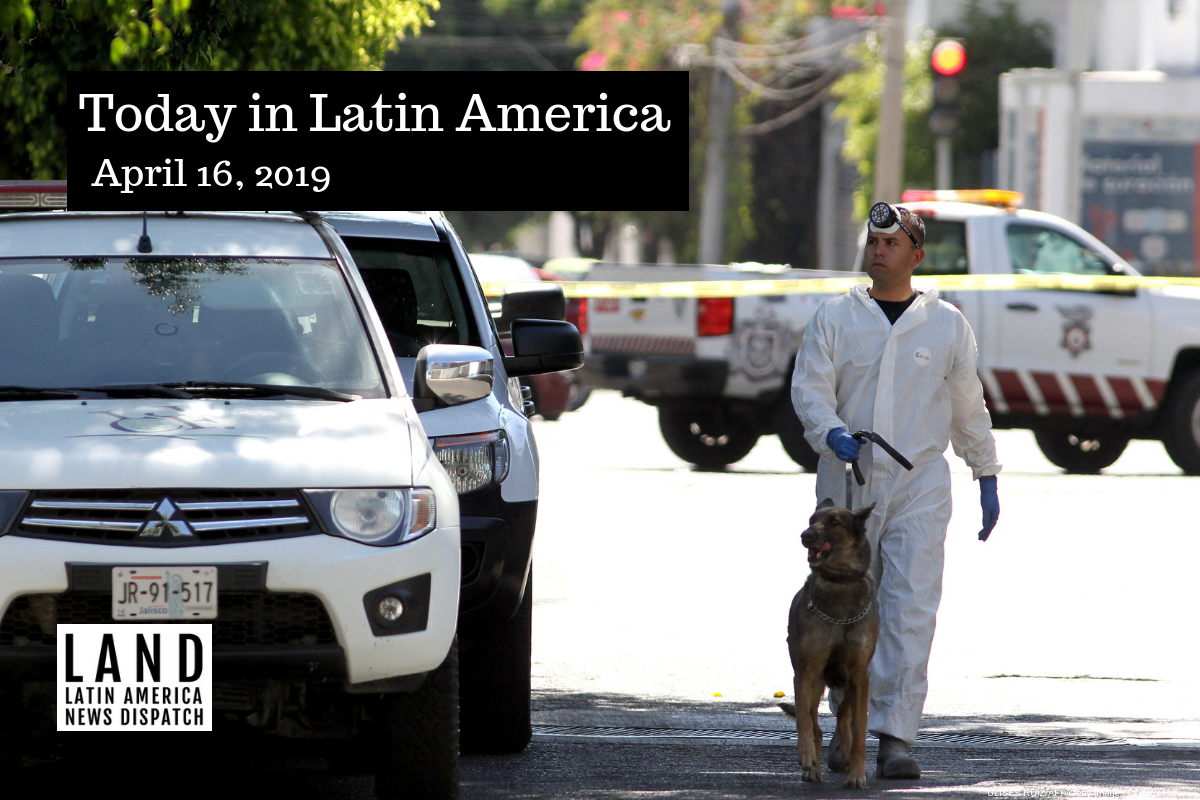 Forensic personnel arrive with a cadaver dog to locate bodies after at least 14 corpses were found in a clandestine grave inside a house in Zapopan, State of Jalisco, Mexico, on April 14, 2019. (Photo by Ulises Ruiz/AFP/Getty Images)

MEXICO: At least 30 bodies were discovered in clandestine burial sites in Cajeme, Sonora, this weekend. A volunteer search group, Guerreras Buscadoras, was accompanied by state forensic experts to investigate reports of a site that held dozens of human remains. The group, led mainly by women, is part of a growing movement to search for the missing remains of their loved ones in light of government inaction. Mexican officials confirmed the findings Sunday evening. Violence in Mexico is continuing to rise, with homicides at their highest rate on record.

MEXICO: President Andrés Manuel López Obrador (AMLO) announced yesterday that he intends to create a “Robin Hood” Institute that would redistribute wealth seized from politicians and criminals back to “the people.” For example, former residences could be recommissioned as schools, hospitals or nursing homes. AMLO’s administration is in the process of writing a bill for the institute and did not provide any more specifics on the redistribution. The Organization for Economic Cooperation and Development (OECD) has estimated that Mexico loses between 5% and 9% of its GDP annually to corrupt activities.

UNITED STATES: U.S. Secretary of State Mike Pompeo ended his South American tour by visiting Venezuelan migrants in Colombia on Sunday. Accompanied by Colombian President Iván Duque, Pompeo spoke with migrants at a shelter in the border town of Cúcuta. Pompeo said he was “moved” by the experience and called on Venezuelan President Nicolás Maduro to end the months-long blockade of humanitarian aid. “Mr. Maduro, open these bridges, open these borders. You can end this today,” Pompeo said.

CUBA: President Miguel Díaz-Canel said yesterday that “everything is being done” to return two Cuban doctors abducted in Kenya. The kidnapping took place last Friday in the town of Mandera located near the Kenyan border with Somalia, resulting in two casualties. Kenyan authorities reported that they have begun negotiating with Al-Shabab, a radical Islamist group in East Africa that has claimed responsibility for the abduction. The Cuban Foreign Ministry said that the other doctors stationed in the African country are safe.

PUERTO RICO: Only $14,000 of the $20 billion of disaster relief funds have been invested in the island. According to a recent report from the Department of Housing and Urban Development, about $18.5 billion of the funding approved by Congress has not even reached the island yet. With the start of the hurricane season on June 1, Puerto Ricans have grown “desperate and frustrated” with the continued delays in aid disbursement following the devastation caused by Hurricanes Irma and Maria.

NICARAGUA: Yesterday, Daniel Ortega’s administration pledged to guarantee a safe return for exiled Nicaraguans. The “voluntary return program” espoused by the regime is supported by the International Migration Organization and vows to protect the livelihoods of expatriates. However, the opposition condemned the initiative, calling it “dangerous publicity stunt” by Ortega’s regime. Over 60,000 Nicaraguanshave left the country amid social upheaval since April 2017. This Thursday marks the one-year anniversary since the deadly protests began in the Central American country.

VENEZUELA: Canada’s foreign minister, Chrystia Freeland, announced tighter sanctions on Nicolás Maduro’s government yesterday. The sanctions targeted 43 high government officials,  bringing the total number of individuals sanctioned by Canada to 113. The measures froze the individuals’ assets and banned Canadians from doing business with them. Canada is one of the more than 50 nations that has recognized Juan Guaidó as the interim president of Venezuela. Freeland blamed Maduro for the current humanitarian and economic crisis currently facing the country.

PERU: Deputy prosecutor Hernán Mendoza asked a judge to keep former President Pedro Pablo Kuczynski behind bars during his ongoing bribery investigation. Kuczynski has been held since last week while prosecutors investigate alleged money laundering activities during his time as minister. The former president resigned last year after it was revealed that his private consulting firm received $782,000 from Brazilian construction giant Odebrecht. Odebrecht has admitted to paying over $800 million in bribes all over Latin America to secure public works contracts. Kuczynski has rejected the accusations.

BRAZIL: The former president of the Brazil Football Confederation (CBF), José Maria Marin, was banned for life yesterday and fined $1 million for accepting bribes, according to the International Federation of Association Football (FIFA). Marin awarded contracts for the media and marketing rights for CBF and other South American soccer competitions in exchange for bribes. Marin was among the first to fall in a $200 million corruption scandal that shook the soccer world. In addition to the new penalties and his current four-year prison sentence in the United States, he has already had to pay $1.2 million in fines and forfeit $3.34 million.