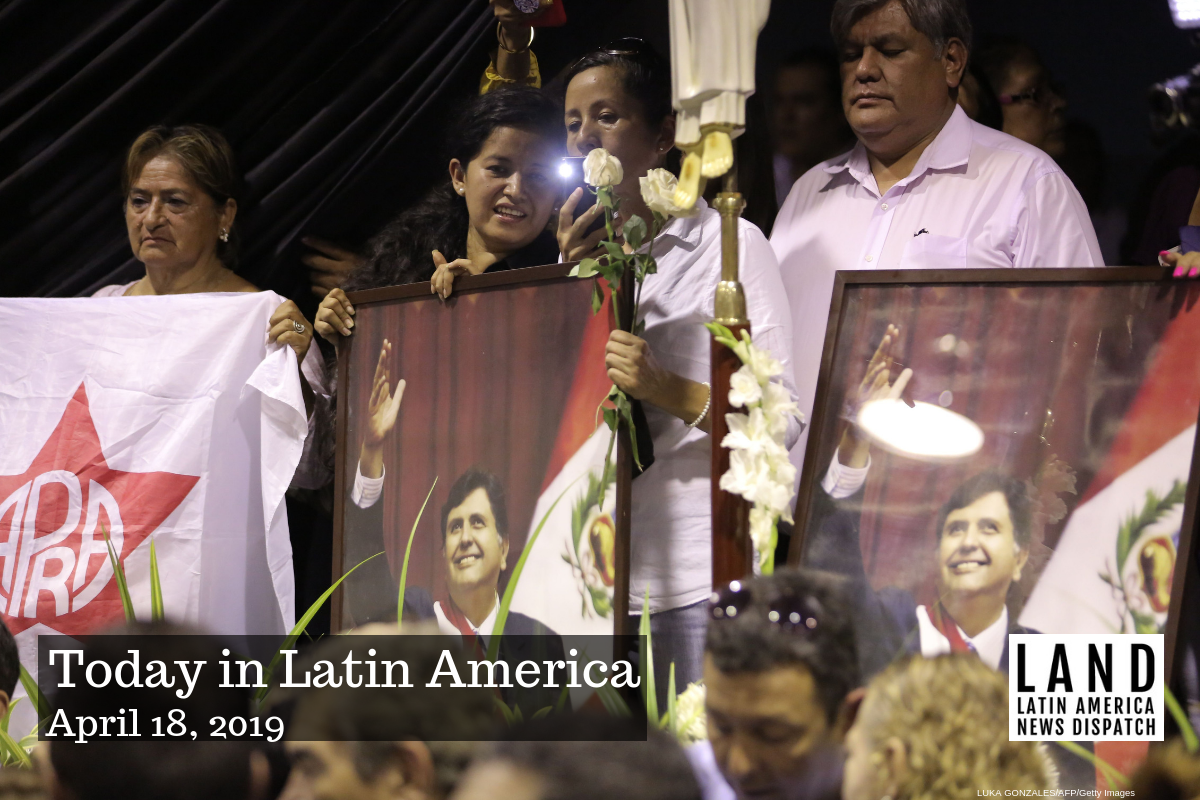 PERU: Former President Alan García shot himself yesterday when police arrived at his house to arrest him. The 69-year-old initially survived the self-inflicted gunshot wound to the head, but ultimately succumbed to his injuries as doctors battled to save his life. According to authorities, García’s 2006 campaign was financed by the Brazilian construction giant Odebrecht, which has admitted to paying $200 million in bribes to secure public contracts all over South America. García’s lawyer, Erasmo Reyna, told press, “the president, upset over this situation, knowing his absolute innocence … had this terrible accident.”

The Odebrecht scandal has put many high government officials behind bars. Former President Pedro Pablo Kuczynski was also hospitalized yesterday after he was detained last week for allegedly accepting bribes in the same corruption investigation.

MEXICO: President Andrés Manuel López Obrador (AMLO) is going forward with the multibillion-dollar Mayan Train project, Mexico’s most ambitious infrastructure project in a century. While AMLO believes this project will provide economic prosperity to poor communities in southern Mexico by boosting tourism, outside observers have commented that pursuing the project at such rapid pace could be dangerous to the environment and people in the surrounding area. AMLO is aiming to complete construction of the train by the end of his presidency in 2024, however, similar projects have taken close to 10 years to complete.

MEXICO: On Tuesday, President Andrés Manuel López Obrador (AMLO) ordered his cabinet ministers to ignore education reforms passed by previous administrations until congress decides on replacement legislation. In a memorandum, AMLO stated that congress is working alongside parents and teachers unions to devise an agreement on the new legislation. Additionally, AMLO said that teachers’ salaries would be controlled by the Treasury Ministry.

UNITED STATES: The United States will sanction the Central Bank of Venezuela. According to the White House, the bank has been vital to President Nicolás Maduro’s position of leadership. National Security Advisor John Bolton says this move will prevent U.S. transactions with the bank, limiting its access to U.S. currency. According to Bolton, this action will deter other countries, such as Russia, from sending troops to Venezuela in order to aid the Maduro administration.

EL SALVADOR: A study released this week revealed a 31 percent increase in sexual attacks against women in El Salvador since 2017, with many related to gang culture. The report, conducted by the Organization of Salvadoran Women for Peace (ORMUSA), stated that 560 women were reported as disappeared and 383 femicides were recorded in the Central American country in 2018. El Salvador remains one of the most dangerous countries in the hemisphere for women, with one woman killed approximately every 18 hours in 2017.

NICARAGUA: A strong presence of Nicaragua’s security forces prevented a march that would have marked one year of turmoil in the country. The streets of Managua were scattered with police posts and paramilitary groups on patrol hours before the “We Are All April” March was supposed to begin. However, hundreds of Nicaraguans were able to protest the increasingly violent regime of President Daniel Ortega, who has been cracking down on dissent since April 2018. Thirty-five people were arrested during yesterday’s demonstrations.

CUBA: The Trump administration continues to tighten its punitive foreign policy with Cuba. During a press conference in Florida yesterday, the White House limited remittances to the island to $1,000 per person per quarter. Additionally, the U.S. also imposed new restrictions on travel, barring all trips that are not family visits. National Security Advisor John Bolton stated that these new measures are set to “reverse Obama-era policies.”

BOLIVIA: Opposition lawmakers experienced backlash after asking the United States to intervene in order to prevent President Evo Morales from running for another term. Twelve opposition lawmakers used the Dark Horse Political consultancy firm to send a letter asking the Trump administration to take “firm and decisive economic and diplomatic measures” against Morales. Morales called the lawmakers “traitors” and criticized their lack of patriotism.

BRAZIL: Attorney General Raquel Dodge clashed with Brazil’s highest court on Tuesday when she accused the court of violating the constitution when it ruled to censor two media organizations. The day before, the court ruled that the news websites O Antagonista and Crusoé must remove articles connecting a judge with the Operation Car Wash corruption scandal that has already put several high-ranking government officials behind bars. Dodge asked the court to withdraw its ruling on the basis that it violates the separation of powers. The news websites face daily fines of over $25,000 while their “false statements” remain published.