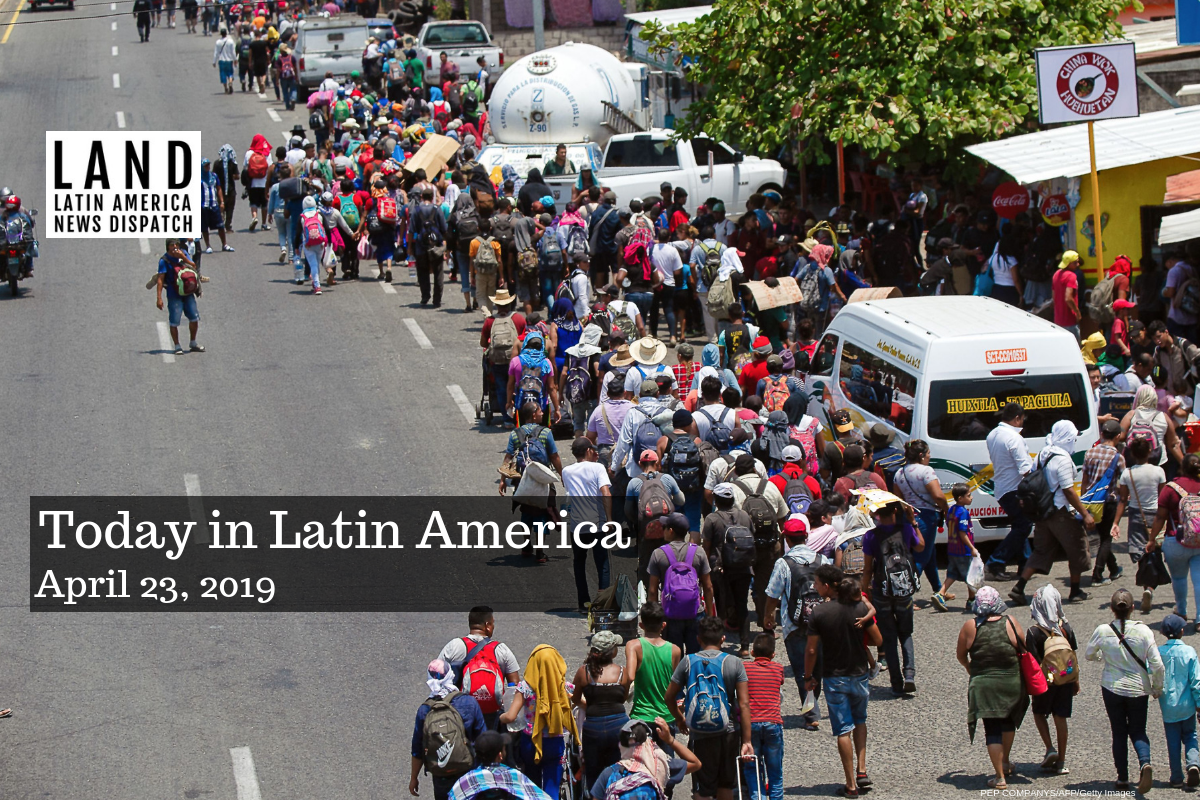 Central American migrants heading in a caravan to the US arrive in Huehuetan, Chiapas state, Mexico, on April 15, 2019. (Photo by Pep Companys/AFP/Getty Images)

MEXICO: Mexican police detained almost 500 migrants yesterday in the largest raid of a Central American caravan to date. As the 3,000 person caravan traveled through Chiapas, police forces arrested groups of migrants resting on the fringes of the group. Similar arrests have occurred over the last month as support for the caravans has waned.

Mexico’s National Migration Institute estimated that at least 5,336 migrants were being held in detention facilities in Chiapas. The National Human Rights Commission says that number may actually be as high as 7,000. According to an official from the commission, they are documenting the action, although the commission has no power to tell authorities what to do.

MEXICO: President Andrés Manuel López Obrador (AMLO) has set a six-month deadline to improve domestic security. Spurred by the Saturday attack in Minatitlán, AMLO pledged to decrease rates of violence by strengthening social programs and the new National Guard and by continuing his attacks on government corruption. The National Security Department also released reports yesterday that show a 9.7% increase in homicide rates during the first quarter of 2019. AMLO said the homicide indexes were starting to stabilize, “but it will take time.”

MEXICO: A 5.4-magnitude earthquake hit the border between Oaxaca and Guerrero yesterday afternoon, causing aftershocks felt throughout Mexico City. Office buildings in the capital were evacuated after buildings started to sway, but it was not strong enough to set off emergency alarms. No injuries or damages were reported.

CUBA: Government authorities are expected to reduce their energy consumption to avoid future blackouts. Invasor, the local newspaper of Ciego de Ávila, a province in central Cuba, reported that energy efficiency is “expected” from all its residents starting this week. A 10% cut is expected for the province itself. Cubans have braced themselves for shortages in foodstuffs since the United States re-imposed economic sanctions last week.

HAITI: The Haitian National Police (PNH) stated over the weekend that it will deploy security units in areas occupied by gangs. PNH Commissioner Michel-Ange Gédéon stated that “safety will be restored” in the streets of Port-au-Prince following rival gang clashes throughout April. The neighborhoods of La Saline and Cité Soleil have been the flashpoints of continuous gun fights.

SAINT KITTS AND NEVIS: For the seventh month straight, Prime Minister Timothy Harris continued to withhold information on St. Kitts and Nevis’s local economy. Harris, who also serves as minister of finance, refused to meet with representatives from the International Monetary Fund and World Bank last week. Harris and the twin-island delegation returned from a diplomatic trip to Taiwan yesterday.

VENEZUELA: Protesters have called on U.S. authorities to bar opposition leader Juan Guaidó’s representatives from entering the Venezuelan embassy in Washington, D.C. On March 18 Venezuela’s opposition, with support of U.S. authorities, claimed the abandoned consular office in New York and the military attache building in Washington. Remaining embassy staff have been given until April 25 by the State Department to vacate the embassy. Led by activist Medea Benjamin, the protesters hope to prevent what Benjamin calls a “hostile takeover” of the embassy.

BOLIVIA: Twenty-five people were killed yesterday in a bus accident. The bus fell roughly 1,000 feet down a ravine in the town of Yolosa, about 50 miles north of La Paz. The driver tried to pass an oil tanker at the moment of the accident and collided head-on with another vehicle, causing the bus to run off the road. An additional 24 people were injured.

ARGENTINA: After a year-long investigation, Argentina’s foreign minister recalled the ambassador, Edgardo Malaroda, in Germany after accusations of abuse and corruption. Malaroda is expected to return to Argentina this week. Malaroda had received complaints from embassy staff as well as German diplomats. The diplomat allegedly used embassy funds for personal use and created a toxic work environment by making staff work overtime and cook for him and his family. Malaroda will be replaced by Pedro Villagra Delgado, who has had an extensive diplomatic career in Australia and the United States.