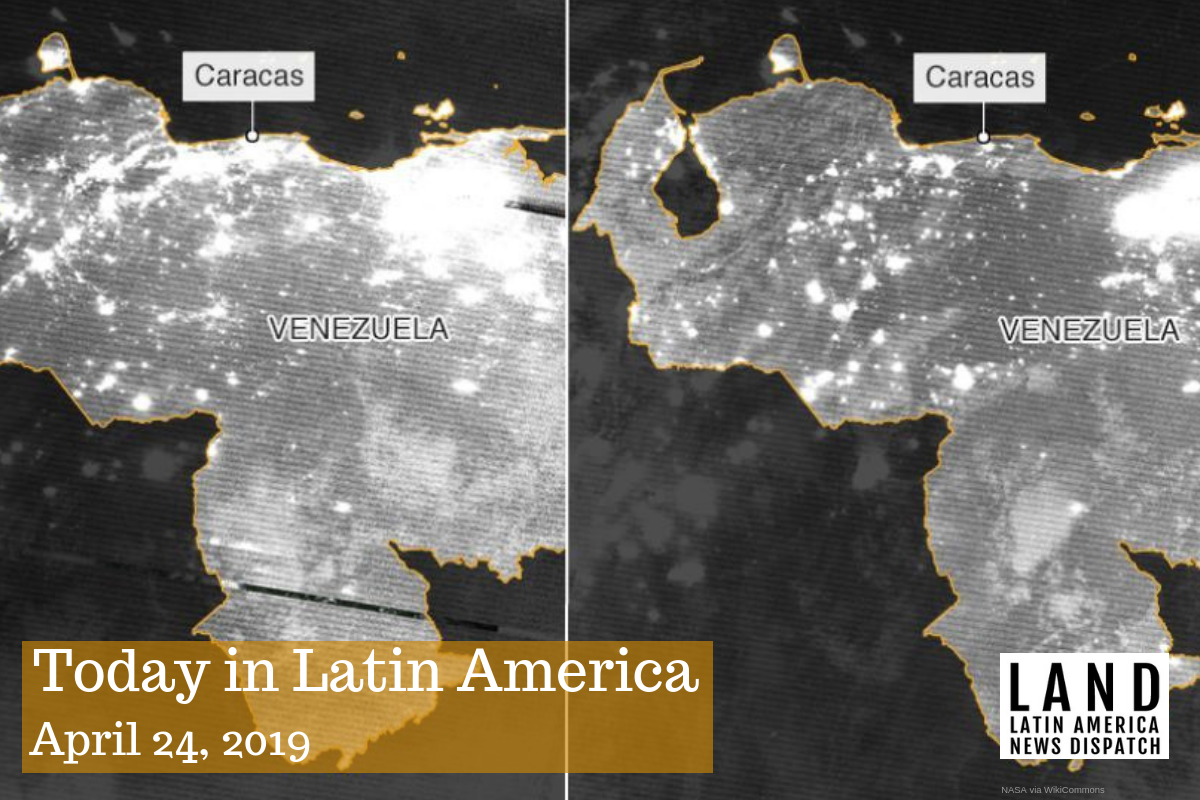 Satellite images show before and after the March blackouts across Venezuela. (Image by NASA via WikiCommons)

VENEZUELA: Information Minister Jorge Rodríguez has announced the arrest of five individuals deemed responsible for the March blackouts. Rodríguez said the government identified 19 total saboteurs and are looking to extradite three more for “electrical sabotage,” but he did not provide further details or evidence. The most recent energy crisis began on March 7 and plunged a large part of the country into darkness for over a week.

At the same time, Russia, ally to President Nicolás Maduro’s administration, blamed the blackouts on sabotages and cyber attacks by the United States. Russia’s deputy defense minister, Alexander Fomin, supported previous allegations made by the Maduro administration that accused the United States of implementing “Operation Blackout”— another attempt to topple Maduro.

MEXICO: On Monday, authorities reported that 13 people killed in a weekend shooting in Veracruz may be victims of an alleged act of revenge between competing criminal groups. According to state prosecutor Jorge Winckler, the gunmen targeted specific individuals at the party, including suspected target and local bar owner Julio César González Reyna. Witnesses said the attackers told Reyna, “You don’t mess with us.” In the first three months of 2019, Mexico has witnessed 8,493 homicides.

MEXICO: Mexican authorities are investigating five law enforcement officers from Nuevo León, who are likely involved in the death of a man early Sunday in Monterrey. Prosecutors believe at least two police officers are guilty of administering a false arrest warrant that ultimately led to the death of the suspect, who fell from the 14th floor of the building. Aldo Fasci Zuazua, the state security secretary, has denied any involvement of the state police in the man’s death.

UNITED STATES: Despite current concerns of a crisis of migrants flowing into the country, U.S. detention centers have had an increase in vacancies in recent months. While the Trump administration continues to hold off migrants at the border, facilities across the country are at low capacity, ranging from 19 percent in Pennsylvania to 26 percent in Texas. Immigration and Customs Enforcement (ICE) has responded to concerns of a “manufactured border crisis” by saying that “limited transportation resources” and “budget restrictions” have contributed to the low numbers.

NICARAGUA: Silvio Báez, a Nicaraguan Roman Catholic bishop, was called back to the Vatican indefinitely and left the country yesterday. Báez had long been critical of Nicaraguan President Daniel Ortega. “It hurts me to leave, but my heart remains here and I will always be following (the situation in Nicaragua) closely,” Báez told reporters at Managua’s international airport. Báez had previously received death threats and was attacked by a pro-government mob last year.

PUERTO RICO: The Puerto Rican government plans to demolish 16,000 structures that were damaged by Hurricane Maria. Officials have applied for $400 million in federal funds for the initiative, on top of $5.7 million it has already received to cover environmental studies, debris removal and demolition. Hurricane Maria left an estimated $100 billion in damages.

COLOMBIA: The Colombian army was accused yesterday by local communities of killing a former guerrilla combatant. Local authorities found the body of Dimar Torres naked and with gunshot wounds just 200 meters from an army base. Community members believe the army shot Torres as he left to buy supplies for his farm, and then tried to bury Torres’ body before it could be discovered. Torres was part of the FARC guerrilla political party, which signed a peace treaty in 2016 with the government to end a 52-year civil war. The army denies the accusations and says none of their soldiers fired their weapons.

BRAZIL: Brazil’s second-highest court ruled yesterday to reduce the sentence of former President Luis Inácio Lula da Silva by over three years. The ruling would allow Lula to leave prison this year for home arrest after serving a sixth of his new 8-year, 10-month sentence. Lula was jailed in April 2018 for corruption and bribery.

BRAZIL: The Marriott Marquis in New York City has agreed to host the US-Brazil Chamber of Commerce event that will award Jair Bolsonaro the “Man of the Year” Award. The event had been turned down by the Cipriani Hall and the American Museum of Natural History following protests from activists and pressure from New York Mayor Bill Blasio. The US-Brazil Chamber of Commerce will also name U.S. Secretary of State Mike Pompeo the “American of the Year.”