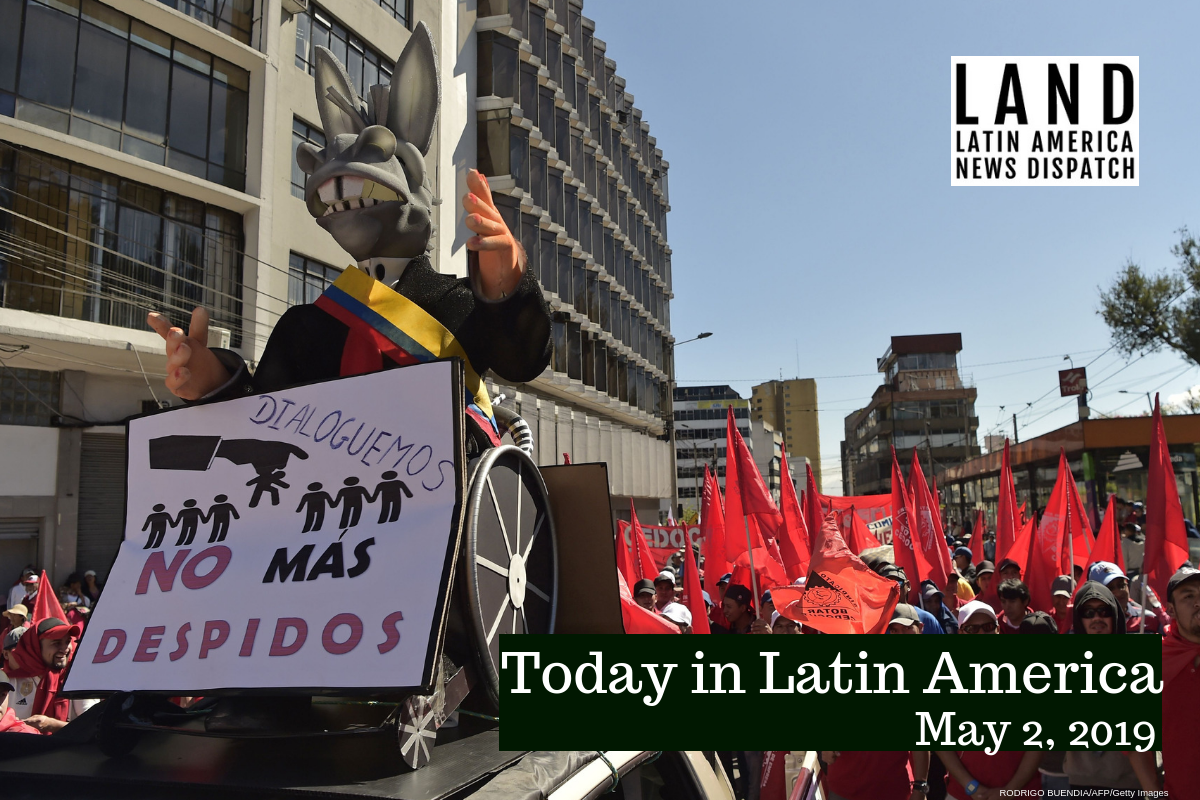 Demonstrators take part in a march by workers, university students and political activists to commemorate May Day, in Quito, Ecuador on May 1, 2019. (Photo by Rodrigo Buendia/AFP/Getty Images)

REGIONAL: Several Latin American countries commemorated International Workers’ Day by carrying out street demonstrations to demand more equitable treatment in the workplace. In Argentina, thousands of scientists from across the country protested President Mauricio Macri’s austerity measures. The protests come in the wake an announcement from funding cuts to the National Scientific and Technical Research Council (CONICET), which stated that only 450 research positions would be available for 2,500 Ph.D. holders.

Under the banner of “no more layoffs, no more privatizations,” Ecuadorians organized a multitudinary demonstration against President Lenín Moreno’s recent agreement with the International Monetary Fund (IMF) in Quito. In Mexico City, a coalition of labor unions that included teachers and doctors marched down Paseo de la Reforma towards the Presidential Palace, demanding a fair salary for their services.

UNITED STATES: An unaccompanied 16-year-old boy from Guatemala died in U.S. custody in Texas. Border authorities transferred the unidentified minor to U.S. Health and Human Services on April 20, but he did not show any signs of illness at the time. The next morning symptoms appeared: fever, chills and a headache. He was then taken to a hospital for treatment but was released the next day. When he did not improve, he was sent to a third hospital, where he passed away. He is the third minor to die in custody.

BORDER: With the surge of Central American migrants seeking shelter in the United States, the White House has requested from Congress an additional $4.5 billion in emergency funds for the southern border. The funding is mainly intended to increase shelter capacity and care for families who have come into the country fleeing poverty and violence. Officials from the Department of Homeland Security say they will possibly “run out of money” without the additional disbursement from the federal government.

MEXICO: President Andrés Manuel López Obrador (AMLO) has instructed his government to recover the remains of 63 coal miners buried in an explosion 13 years ago. On Feb. 19, 2006, an explosion occurred while 73 miners were on duty at the Pasta de Conchos mine in Coahuila. Eight miners survived with third-degree burns, while only two bodies were recovered from the site. While three consecutive administrations decided not to try finding the rest, saying it would be too risky and costly, the victims’ relatives have continued to press authorities. AMLO stated this was “an act of justice.”

PUERTO RICO: A new bill proposed by Republican lawmakers will send an extra $300 million in disaster relief to Puerto Rico. In a legislative battle lasting for months, this new GOP-sponsored bill, which already includes $600 million, will provide assistance for Community Development Block Grants. While President Donald Trump is expected to hold off opposition from this new bill, Democrats said that they would “review the text” before endorsing it.

CUBA: Thousands of Cubans took to the streets yesterday to protest the new sanctions put in place by the Trump administration. The protests came in a timely fashion, commemorating International Workers’ Day. President Miguel Díaz-Canel “categorically rejected” the embargo on the island and condemned the “aggressive U.S. policy” on Nicaragua and Venezuela. Moreover, in an interview with the Associated Press, a Cuban diplomat stated that there are “no Cuban troops” in Venezuela, as stated by Washington intelligence.

GUATEMALA: Pro-life groups delivered 50,000 signatures to the Guatemalan Congress to approve a law that would penalize late-term abortions. The bill, called Initiative 5272 for the Protection of Life and Family, states that “accidental abortions” would incur a two- to four-year prison sentence, whereas women who carry out “premeditated abortions” could get five to 10 years. Additionally, Initiative 5272 would outlaw same-sex marriage and sexual diversity, deeming it “incompatible to human biology and genetics.” Yesterday, dozens of Guatemalans vociferously rejected the bill outside of the legislative chambers. Lawmakers are expected to deliberate on the outcome of the bill in its third and final session today.

COLOMBIA: Yesterday, U.S. President Donald Trump nominated Philip Goldberg as the new ambassador to Colombia. The career diplomat will replace Kevin Whitaker, who has caused a number of controversies in Colombia for attempting to coerce opposition congressmen. Goldberg served as ambassador in Bolivia and was expelled from the country by President Evo Morales for allegedly conspiring against his government. Goldberg has extensive experience in Latin America and Colombia, having coordinated the controversial anti-narcotics strategy known as “Plan Colombia” in 2001.

VENEZUELA: Opposition leader and self-declared interim president Juan Guaidó repeated calls yesterday for a military uprising to dislodge President Nicolás Maduro. Thousands of Venezuelans continued protests throughout the day in several parts of the country. However, with the exception of the Venezuelan intelligence agency chiefbreaking ranks, most of the armed forces remained loyal to Maduro. In a video, Maduro promised to find those who took part of “Operation Freedom” and submit them to justice.

BRAZIL: Education Minister Abraham Weintraub announced a 30% cut to universities yesterday because of their ideological stances and poor performance. The cuts are expected to equally affect all the universities linked with the ministry, which includes over 300 public universities. President Jair Bolsonaro has repeatedly attacked public universities for having “marxist ideology.” Bolsonaro has also proposed ending funding towards sociology and philosophy studies.