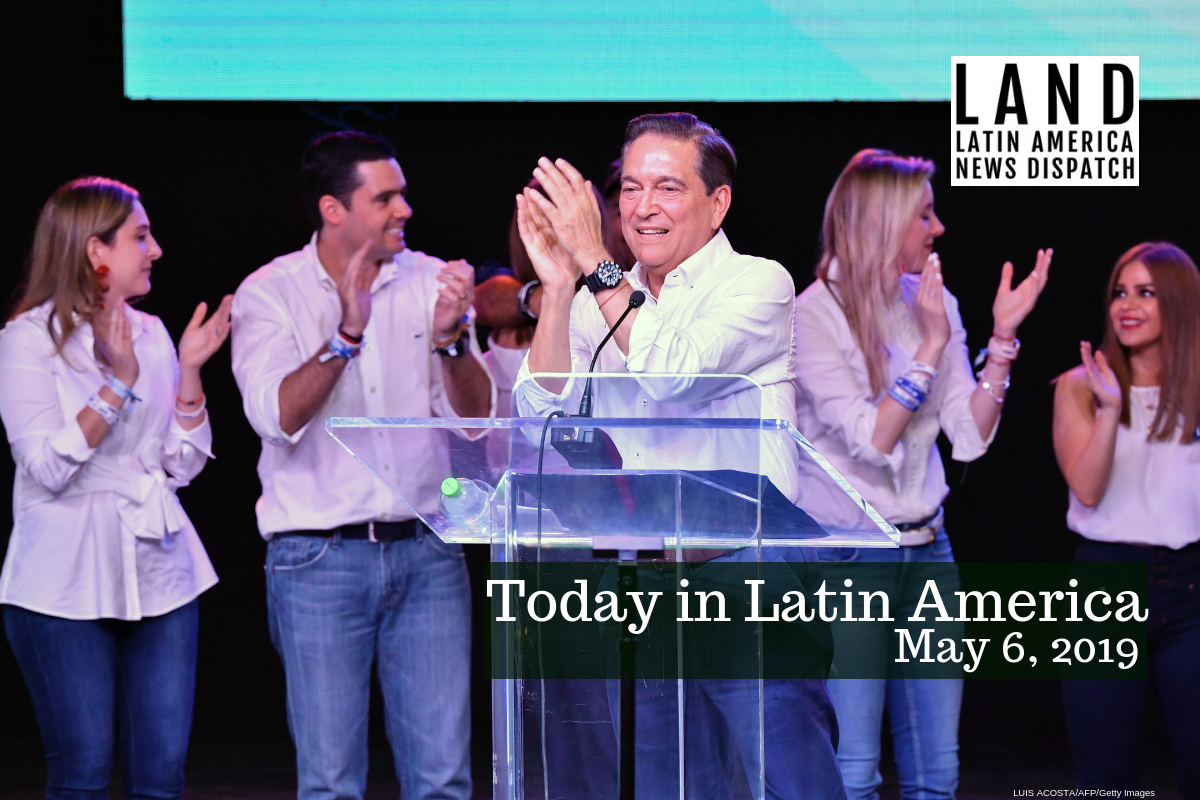 Panama's presidential candidate for the Democratic Revolutionary Party (PRD) Laurentino Cortizo (C) applauds as he delivers a speech after being elected President of Panama, in Panama City on May 5, 2019. (Photo by Luis Acosta/AFP/Getty Images)

PANAMA: Panamanians elected Laurentino Cortizo of the Democratic Revolutionary Party (PRD) as their new president yesterday. Cortizo won 33 percent of the vote. The businessman-turned-politician with over 25 years of experience in public office will serve for a five-year period after narrowly defeating Rómulo Roux of the Democratic Change (CD) party. Cortizo has proposed a constitutional reform and major infrastructure projects, including a new metro line in Panama City.

MEXICO: An Indigenous rights activist was found dead inside a vehicle Thursday in San Agustín Loxicha, a city in the southern state of Oaxaca. Journalist Telésforo Santiago Enríquez, who  founded a community radio station that promoted Indigenous rights in the Zapotec language, appeared to have died of gunshot wounds. His death has not been ruled a homicide. Enríquez was known for his criticism of the local government, and he had received threats earlier in the year. Enríquez’s death came on the eve of World Freedom of the Press Day, sparking outrage from organizations that promote freedom of the press.

I am pleased to inform all of those that believe in a strong, fair and sound Immigration Policy that Mark Morgan will be joining the Trump Administration as the head of our hard working men and women of ICE. Mark is a true believer and American Patriot. He will do a great job!

Morgan operated as head of the USBP in the final months of Obama’s presidency, but left his post in January 2017 after Trump began signing executive orders to increase security on the southern border. Morgan has since voiced support for Trump’s border wall.

CURAÇAO: In Curaçao, health authorities vaccinated over 300 passengers on a ship under quarantine to prevent a measles outbreak from spreading. Island officials worried that people onboard the Freewinds vessel may have been exposed to the measles after one crew member was diagnosed with the illness following a trip to Europe. The Freewinds, which is said to be linked to the Church of Scientology, had already been quarantined in St. Lucia last week. It is the worst measles outbreak in the past few decades, with over 700 cases confirmed in 22 U.S. states just this year.

PUERTO RICO: Puerto Rico announced a monumental deal with creditors to allow the bankrupt U.S. commonwealth to reassemble bonds worth over $8 billion. The momentous proposal, yet to be approved by Congress, would reduce Puerto Rico’s Electrical Power Authority’s (PREPA) debt by up to 32.5 percent. Still, the deal lacks support from some creditors and requires the approval of a U.S. judge hearing the island’s bankruptcy cases.

GUATEMALA: Severe dryness has been declared the cause of over 20 forest fires in Guatemala. However, domestic news sources like Prensa Libre suggest that drug trafficking schemes may also be the cause of fires in Petén, in the north of the country. Clandestine airstrips that were destroyed in February have yet to be completely disabled in the location of these fires. Over 7,000 acres have been burned.

VENEZUELA: Seven military officers died in a helicopter crash on Saturday while on their way to the northwestern town of San Carlos, where President Nicolás Maduro spoke to Venezuelan troops. Two lieutenant colonels and five lower-ranking officers were on board when a helicopter slammed into a mountain outside the capital of Caracas. A statement from the armed forces did not confirm if the helicopter was part of the presidential delegation that brought Maduro to a military academy in Cojedes state. Meanwhile, after a failed coup attempt by opposition leader Juan Guaidó, Foreign Minister Jorge Arreaza planned to meet with his Russian counterpart Sergey Lavrov on Sunday in Moscow, according to Russian state news.

COLOMBIA: On Saturday, an outspoken environmental activist survived a shooting at a meeting with Afro-Colombian leaders in the southern town of Santander de Quilichao. Francia Márquez. The recipient of last year’s Goldman Environmental Prize, she said the unknown gunmen launched a grenade and opened fire on the crowd of activists. Bodyguards tried to protect the attendees by combating the attackers, but two people were injured. President Iván Duque ordered an investigation of the incident.

BRAZIL: A new report indicates that police killings rose 18 percent in the state of Rio de Janeiro during the first three months of 2019, a new high since record keeping began in 1998. The rise in police killings comes under the watch of Gov. Wilson Witzel, a former marine and ally of far-right President Jair Bolsonaro, who called for a zero tolerance policy for criminals and fought for greater access to firearms. Witzel said he wanted to target criminals in favelas with sharpshooters aboard helicopters while on the campaign trail. Official data shows police killed 434 people in the first three months of this year compared to 368 people during the same period of time last year.