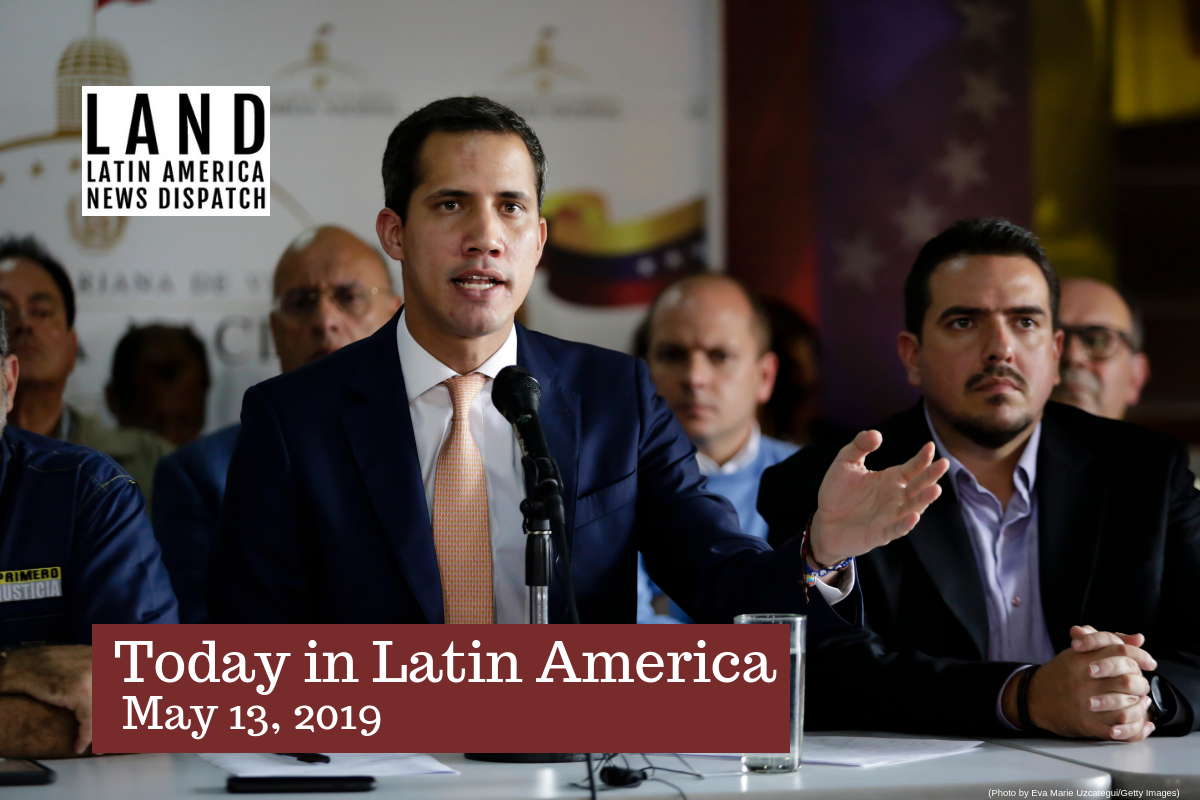 Venezuelan opposition leader Juan Guaidó (L) talks to media during a press conference at Centro Plaza on May 9, 2019 in Caracas. (Photo by Eva Marie Uzcategui/Getty Images)

VENEZUELA: Venezuelan opposition leader Juan Guaidó requested that his envoy in Washington, D.C., open relations with the U.S. military. While speaking at a rally on Saturday, Guaidó said he asked U.S.-recognized ambassador Carlos Vecchio to open communications with the Pentagon in order to coordinate an effort to overthrow the Maduro administration. “We have instructed our ambassador Carlos Vecchio to meet immediately … with the Southern Command and its admiral to establish a direct relationship,” Guaidó said.

The opposition leader added that China would join the International Contact Group on Venezuela, a diplomatic effort to end the crisis. Although the United States has stated that “all options are on the table” to end Maduro’s presidency, the majority of Latin American countries and the European Union oppose military intervention in Venezuela.

MEXICO: An 83-year-old union leader was “assassinated” in central Mexico on Saturday. Gilberto Muñoz Mosqueda was reportedly ambushed in his car while driving through the city of Salamanca. Mosqueda served as a federal senator for the Institutional Revolutionary Party (PRI). He also was the head of a chemical and petrochemical union for about 40 years. Prosecutors said they would expend all necessary resources to find Mosqueda’s killers.

REGIONAL: The United States diverted more than 700 border patrol agents from the U.S.-Canada border to the U.S.-Mexico border ahead of the summer tourism season. Local officials in both Canada and the United States have expressed concern that the move will lengthen border crossing times for tourists, potentially threatening tourism in the region. Approximately 400,000 people and more than $1.6 billion in goods cross the U.S.-Canada border daily.

MEXICO: A migrant detention station in southern Mexico caught fire yesterday. None of the 117 migrants inside were injured. According to Mexico’s National Migration Institute, the fire at the facility in Oaxaca was started “by people inside the installations.” The Institute also said damage to the facility was “significant.” At the same time, the local government asked residents of Mexico City to remain indoors due to naturally occurring fires. Over 250 firefighters have been called to put out 21 fires, including brush fires and a forest fire.

PANAMA: U.S. Secretary of State Mike Pompeo spoke on the phone with Panama’s President-Elect Laurentino Cortizo on Friday to discuss ties between the two countries. Pompeo said on Twitter that the countries will continue promoting democracy in Venezuela and Nicaragua. Cortizo is the latest Central American president-elect to denounce Venezuela’s Nicolás Maduro and Nicaragua’s Daniel Ortega, after El Salvador’s President-Elect Nayib Bukele said he wouldn’t invite them to his inauguration on June 1. Cortizo, a career politician, won the Panamanian election on May 5, vowing to tackle corruption.

CUBA: Several Cubans were arrested Saturday during an unauthorized gay pride march in Havana. The group marched for eight blocks before police stopped them and arrested at least three people. Last week, the Cuban government abruptly canceled the 12th annual march, known as the Conga Against Homophobia and Transphobia, citing “new tensions in the international and regional context.” Cubans organized the march anyway through social media.

CURAÇAO: The last 28 people quarantined on a Church of Scientology ship after a crew member contracted measles are expected to leave the ship today. Another 318 passengers and crew members were allowed to leave yesterday. The ship, known as Freewinds, hosts “a religious retreat ministering the most advanced level of spiritual counseling,” according to the Church of Scientology website. Before arriving to its port in Curaçao, the ship was quarantined in St. Lucia. No other passengers or crew members contracted measles.

COLOMBIA: President Iván Duque said on Friday that he would not let the border with Venezuela become a safe haven for the National Liberation Army (ELN) rebels. The president’s comments came in response to documents published in local media Red+ Noticias. The documents show that the Venezuelan military provided explosives to the rebel group and reference orders from Venezuelan President Nicolás Maduro to treat the rebels as military allies.

BRAZIL: On Friday, a judge on the Brazilian supreme court gave the Bolsonaro administration five days to respond to opposition allegations that a recent gun decree is unconstitutional. The decree raised the number of ammunition Brazilians can buy and rolled back restrictions on gun imports, a major blow to the country’s strict gun laws. A day after the decree was signed on May 7, the Sustainability Network party (REDE) filed a petition with the Supreme Federal Tribunal, arguing that the decree was executive overreach and should have been passed by Congress.