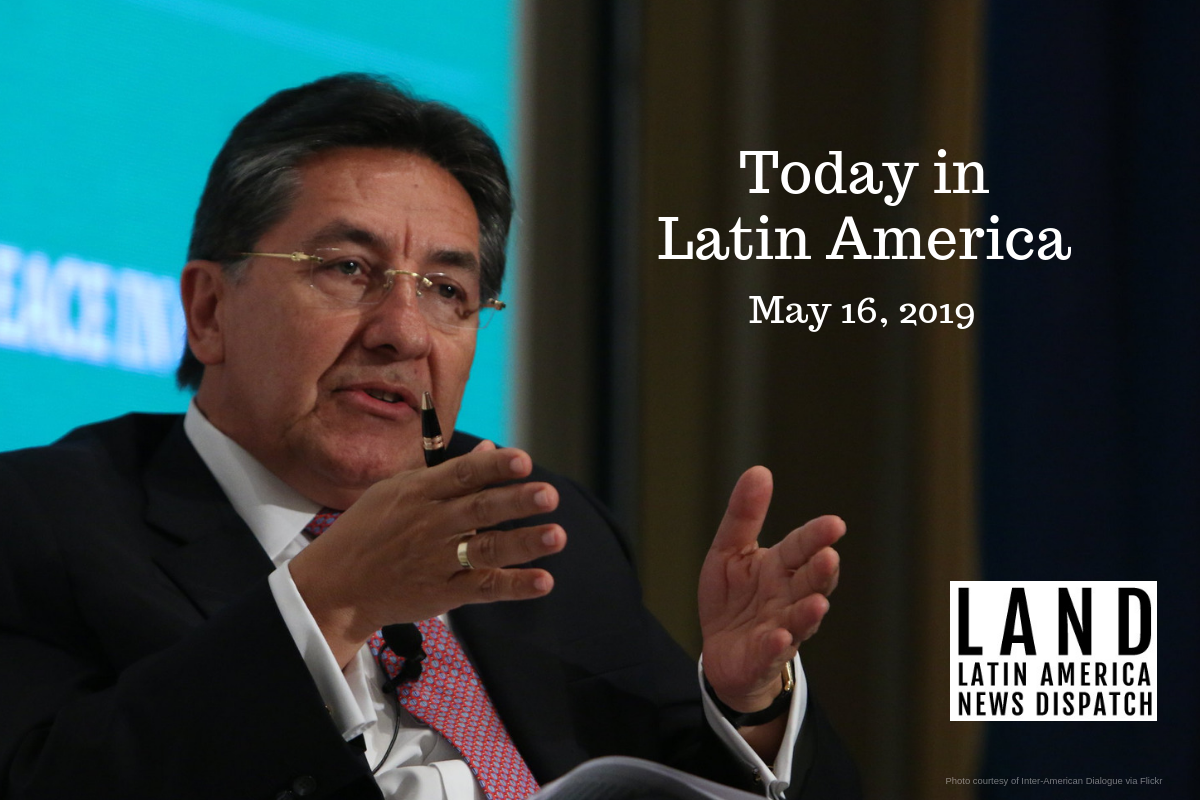 Colombian Attorney General Néstor Humberto Martínez resigned yesterday following the news that FARC rebel Seuxis Hernández would not be extradited to the U.S. (Photo courtesy of Inter-American Dialogue via Flickr)

COLOMBIA: Colombia’s special tribunal prevented Seuxis Hernández, a high-level FARC rebel commander involved in the peace process, from being extradited to the United States on a drug warrant yesterday. The decision prompted the resignation of Attorney General Néstor Humberto Martínez, who protested the tribunal’s decision as an affront to the rule of law.

Hernández, who is also known as Jesús Santrich, was arrested last year for allegedly attempting to smuggle $15 million worth of cocaine into the United States. Hernández denied the charges and accused the U.S. Drug Enforcement Agency and Colombian government of organizing a set up.

UNITED STATES: President Donald Trump has devised a new immigration plan that he will announce in a White House speech today. The plan aims to strengthen border security and redesign the current green card system to favor immigrants with degrees and job offers, rather than those who have relatives in the United States. It does not offer provisions for undocumented immigrants, such as the DREAMers, and eliminates the diversity visa lottery. The plan was directed by Trump’s senior adviser and son-in-law Jared Kushner, but it has not yet received full support from the president’s party.

UNITED STATES: The U.S. Department of Homeland Security announced yesterday that it will be indefinitely canceling all commercial passenger and cargo flights between the United States and Venezuela. “This determination is based on the ongoing political instability and increased tensions in Venezuela and associated inadvertent risk to flight operations,” the statement read. DHS will continue to monitor the situation in Venezuela, alongside the Departments of State and Transportation.

MEXICO: The Mexican senate approved a law on Tuesday that requires written contracts, paid vacation and limited work hours for gardeners, cooks, nannies and other domestic workers. The new law will benefit nearly 2 million people, mostly women from disenfranchised backgrounds. President Andrés Manuel López Obrador has yet to sign the bill into law, but he is expected to do so.

CUBA: Cuban visits to Nicaragua have increased 900%, according to Nicaraguan officials. Over 5,000 Cubans have traveled to the Central American country since the beginning of 2019, compared to only 556 at the same time last year. The increase comes with the news that many of those Cuban visitors embark on a journey north, crossing into the countries of the Northern Triangle and Mexico. Additionally, the United States has experienced a surge in Cuban migrants submitting asylum applications at its southern border over the last few months.

TRINIDAD AND TOBAGO: A Chinese construction firm will provide funding for a new $160 million hospital in the twin-island nation. The general hospital will be built in the capital city of Port of Spain by the Shanghai Construction Group, replacing a 60-year-old building damaged by an earthquake and deemed unsafe for occupancy in 2009. The new hospital will include 540 beds and a new obstetrics and gynecology ward.

BOLIVIA: Bolivia submitted a written response to Chile’s suit at the International Court of Justice concerning Silala water rights on Tuesday. The court will proceed to hear oral arguments and is expected to reach a decision next year. The Silala water rights have been a strain on Chile and Bolivia for decades, and Chile opted to end bilateral negotiations and moved the case to the Hague. The contested water resource originates in Bolivia and flows into Chile. Bolivia has demanded payment for Chile’s use of the water while Chile argues it is an international resource of free use.

BRAZIL: Four judges ruled unanimously to release former President Michel Temer from preventive detention yesterday. Temer was arrested a week ago in relation to the “Car Wash” corruption probe. Temer allegedly received bribes from a construction company to build a nuclear power plant in Rio de Janeiro. Instead of remaining in custody, Temer agreed to hand over his passport. The “Car Wash” probe has already put former president Luiz Inácio Lula da Silva behind bars for more than eight years.