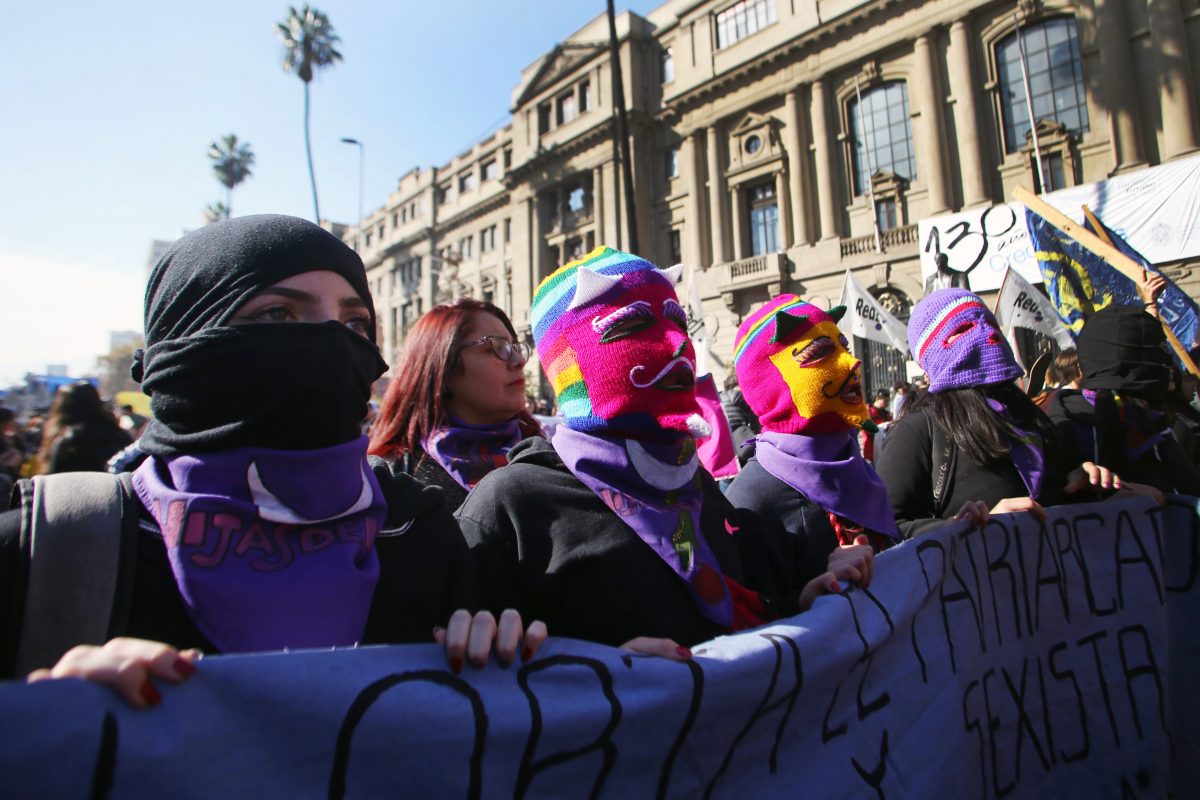 A group of hooded students take part in a march to demand "non-sexist" education and to protest the slow pace of educational reform in Santiago de Chile, on June 6, 2018. (Photo by Claudio Reyes/AFP/Getty Images)

When professors Vania Figueroa and Karina Bravo, respected neuroscientists hired at the newly created Chilean public, regional university, Universidad de O’Higgins, began to speak out about facing harassment from their colleagues, university administrators told them their contracts would not be renewed. The case has shaken the Chilean academic community to its core and women academics and researchers, especially, wonder if they could be next. But the professors and their allies are not giving up their fight to equal treatment in the workplace.

This case of discrimination comes amid a wave of feminist student uprisings in Chile, which spread across the country last May. Students throughout the country occupied universities, and classes were put on hold for months at a time. The demands of these feminist students generally focused on putting an end to the sexual violence and sexual harassment that many women and LGBTQIA+ students face on Chilean campuses. These protests began to rise over a relatively short time, and built upon the many years of strong student activism since the large 2011 mobilizations for free, quality education.

In the wake of this activism, feminist student assemblies and confederations formed, calling for the passage and implementation of anti-violence protocols in their universities, which essentially did not exist in Chile up until this point. However, while feminist students have been quite successful in drawing attention to violence and harassment within universities and developing these anti-violence protocols, much work remains to be done. In particular, women academics and researchers in Chile today lack protections and continue to face unbridled sexism in the university.

This is particularly clear in the case of the two well-known feminist neuroscientists and leaders of the group Red de Investigadoras (Network of Female Researchers, RedI), Dr. Karina Bravo and Dr. Vania Figueroa. In 2017, Bravo and Figueroa were hired to work as academics at a newly-founded regional university in Chile, the Universidad de O’Higgins in Rancagua, about an hour south of the capital city of Santiago. Both academics had, up until that point, sterling academic credentials, with completed Ph.Ds., prestigious fellowships and scholarships in Chile and abroad, scientific publications, and had won numerous competitive research grants administered through the state system, CONICYT. Additionally, both women had leadership positions within the RedI, which meant that they frequently participated in academic debates on the university, STEM fields, and gender in the media and made regular visits to Congress and other state institutions. However, once Bravo began to speak out about the workplace harassment that she was experiencing, the respect and accolades quickly began to wane.

Shortly after her hiring in 2017, Karina Bravo, a neuroscientist specialized in the effects of the anti-depressant fluoxetine on central chemoreception, felt that there was a different type of behavior exhibited towards her, one lacking professional respect. Being a relatively young woman neuroscientist was very difficult, and in Bravo’s case soon led to harassment.

“There was professional and gender-based discrimination. From the moment I started there, they began harassing me, for being ‘young,’ for example. They explicitly did not value my abilities,” she said.

When her daily interactions with her superiors became an almost torturous affair, Bravo knew that she had to do something, even if it ended up seriously affecting her own career in the process. After many failed conversations with her superiors, and unfulfilled promises to better the situation, Bravo filed a harassment complaint in June 2018, she told me.

Vania Figueroa, a fellow neuroscientist who studies how dietary fatty acids influence cellular communication, testified on Bravo’s behalf during the internal investigation that followed Bravo’s complaint to the school. She felt that this was her moral and ethical duty, despite knowing that doing do could also potentially harm her own academic career. All of this came to a head when, in December 2018, both Figueroa and Bravo were informed that their contracts at the Universidad de O’Higgins would not be renewed. The university claimed they were firing Bravo and Figueroa for “a lack of scientific and academic productivity.” However, their productivity had been evaluated by the very academics that they had denounced for harassment, a clear conflict of interest, and was not based on any independent evaluation.

Figueroa and Bravo questioned their illegal firing and the arbitrary conditions under which it took place, immediately suing in Rancagua courts for unfair termination. They also brought their demands to the Chilean House of Representative’s Women and Gender Equity Commission in December 2018. In this capacity, the provost (or rector) of their former university, Rafael Correa, was asked to testify about the case on January 7, 2019. When asked directly about the criteria used for their expulsion from the university, Correa stated, as quoted in a Chilean newspaper in January, “their evaluations showed me that we are talking about two academics that didn’t have the will or the capacity, although I would say more the will because the capacity they did have, to be able to rise through the academic ranks and have an academic career at the Universidad de O’Higgins.”

“I have been very worried about [Correa’s] statements,” she wrote in the February article. “Although the belief persists that academic institutions are merit-based and fair, cases like those of Dr. Bravo and Dr. Figueroa remind us that this is not always the case for women. There is evidence that explains that the scarce presence of researchers in some universities is due to the accumulative effects of hostile work environments, evaluation bias due to gender stereotypes and institutional structures that disadvantage women in academia.”

Her words confirm the unfair and blatantly sexist parameters of the large gender gaps that appear in Chilean academia, even more so in STEM fields. According to the NGO Comunidad Mujer (Women Community), which published a 2017 report about women in STEM, between 2007 and 2017, 81 percent of all first-year students in “hard science” and engineering departments and 53 percent of students in life science departments in Chile are men. According to this same report, Chile is last among OECD countries in terms of women who manage to graduate from college in STEM careers, accounting for only 19 percent of total graduates. At the same time, women only represent 22.7 percent in the elite researchers that make up CONICYT’s STEM study groups —that help to select individuals for prestigious grants in their fields— and also only make up 23.9 percent of all STEM academics in top Chilean universities. All this should be no surprise considering that academics must have the “will” to withstand double or triple shifts as primary caregivers of children and the elderly, as Correa put so scathingly, and to work for lower wages in lower-prestige positions requiring a large amount of administrative and “care” work, according to a CONICYT report. According to another Comunidad Mujer study, in 2017 Chilean women did 6.6 hours of unpaid care-work per day, while Chilean men only did 3.2, for example.

Furthermore, on April 5, 2019, a CONICYT resolution formally ended an investigation under Figueroa, which was focused on the effects of omega-3 fatty acids on pregnant women, funded under a national grant project that seeks to introduce brilliant new scientific talent into research universities. Because Figueroa completed her yearly report but the university refused to sign it, the Universidad de O’Higgins was found at fault and is therefore required to refund the totality of the project’s resources to CONICYT, this decision also unfairly punishes Figueroa, who told me that she was emotionally “devastated” by this decision.

Figueroa is currently awaiting a response from the Rancagua courts in response to her firing. “The professional and health costs of making this public for me have been tremendous,” she says. “I’m still unemployed, even though I have applied to many jobs. It is almost impossible to revert the damage that the Universidad de O’Higgins has done to my professional career.”

In universities in Chile and throughout the world we are confronting an important moment of reflection, bolstered by the “Me too” (“Yo te creo” or “Yo también“) moment. Many women and LGBTQIA+ academics, researchers, undergraduate, and postgraduate students, and university employees have only recently begun to raise their voices and call out the harassment and violence present at our universities.

“We are not the first and, unfortunately, we will not be the last to have to endure this type of situation, but it is only when we can make visible the invisible barriers that we face that we can begin to dismantle them,” said Figueroa. “We are tired, fed up, with abuses of power, nepotism, favoritism, and patriarchal logic within universities. We want to say once and for all: ‘¡basta! (enough!).”

For this same reason, many among the Chilean academic community are energetically denouncing the case of Drs. Figueroa and Bravo. Fellow women academics, including Gloria Montenegro, have written letters to the editor or op-ed columns to show support; feminists, academics and students have held protests and there have been feminist funas (collective “calling outs” of injustice) at the Universidad de O’Higgins, denouncing what happened to the professors. Additionally, a petition is circulating (in both Spanish and English) to show support for their cause, in hopes of pressuring the Chilean government into providing Figueroa and Bravo with some type of legal or academic restitution for what has happened to them. Among their calls are for Provost Correa’s resignation and the reinstatement of their contracts.

It is high time for academics across the Americas and beyond to consider what Figueroa and Bravo’s case says about the status of women and LGBTQIA+ academics and our ability to organize and make demands concerning living without violence and harassment in our university settings. Undoubtedly, the most affected academics are those that have only recently been able to enter into academia in the Americas who are also most vulnerable and exposed to harassment and violence—Black, Indigenous and other racialized women academics; women academics who come from poor, working-class, or immigrant backgrounds; and LGBTQIA* academics. This is particularly the case in the context of a global atmosphere that is, unfortunately, trending towards dangerously racist, xenophobic, anti-feminist, and anti-LGBTQIA+ discourses. In order to resist, we must come together. Only in our collective strength can will challenge and resist the violence that permeates universities and beyond.