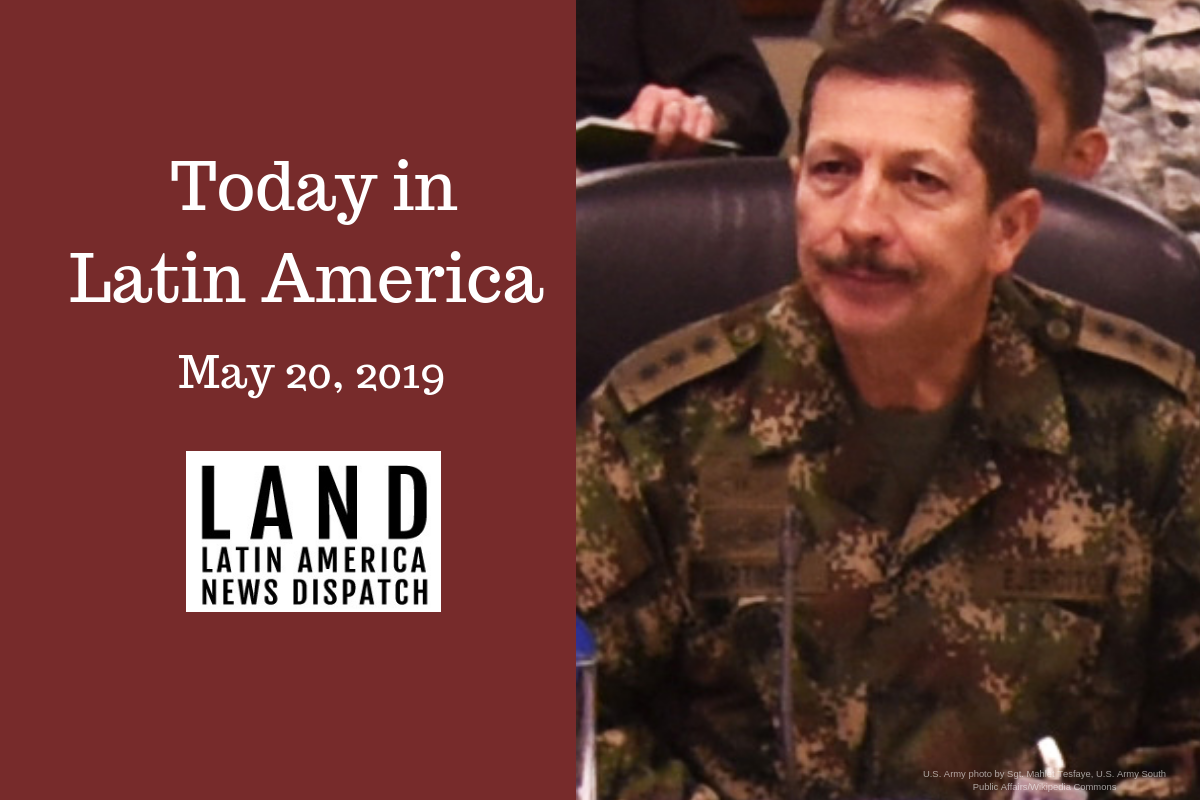 COLOMBIA: An article published in the New York Times on Saturday details how Colombia’s army chief has ordered to “increase combat kills” through any means necessary, even if the strategy results in more civilian casualties. As a response, Defense Minister Guillermo Botero launched an investigation into General Nicacio Martínez Espinel, who is accused of promoting extrajudicial executions in Colombia.

The article has prompted widespread backlash from the Colombian right-wing. Yesterday, the article’s author Nicholas Casey left Colombia following threats against him made by Senator María Fernanda Cabral for the Democratic Center (CD) party. Senator Cabral implied on Twitter that Casey had been paid off by Colombian guerrillas to write the article.

Casey also reported that security forces have experienced a 33 percent increase in combat kills during the first quarter of this year.

U.S.-MEXICO BORDER: President Donald Trump told Florida governor that asylum seekers at the border will not be flown to Florida, according to the spokesperson for Governor Ron DeSantis. The president’s initial immigration proposal of sending two thousand migrants to Broward and Palm Beach counties were received with alarm by local residents. However, the Trump administration will continue transferring migrants from Texas to San Diego. Around 100 migrants from the Rio Grande Valley arrived to the Border Patrol’s South Bay station over the weekend.

REGIONAL: The United States, Mexico and Canada have multilaterally-agreed to remove tariffs on steel and aluminum. Mexican President Andrés Manuel López Obrador praised the deal, calling it a “triumph of diplomacy.” The three countries are in the process of ratifying a new trade deal, the U.S.-Mexico-Canada Trade Deal (USMCA), which will replace the North American Free Trade Agreement (NAFTA).

PUERTO RICO: Yesterday, the fiscal oversight board said that they will sue the retirement system’s bondholders in an attempt to recover $392 million. The board claims that the Employees Retirement System (ERS) “was never authorized” to issue bonds to the public in 2008, since they were never approved by Puerto Rico’s legislative chamber. Several vendors received payments over $2.5 million “without a valid contract,” the federally created entity alleges.

REGIONAL: U.S. Department of State have released a “corrupt list” that includes over 50 elected and senior government officials in Guatemala, El Salvador and Honduras. Among these are Guatemalan presidential candidate Mario Estrada, recently detained in Miami after conspiring to collaborate with a drug cartel and plotting to kill other candidates, and former president Antonio Saca, currently serving a 10-year prison sentence for appropriating public funds. U.S. Representative Norma Torres (D-Cal.), the only Central American serving in Congress, has called the list “a sham” because it “conceals the names” of other known corrupt government officials in the region.

COSTA RICA: The ‘morning-after’ pill can now be purchased without a prescription in Costa Rica. Known commercially as Plan B, Levonogerstel will be the only accessible emergency contraceptive that can be acquired over-the-counter in pharmacies nationwide. Lawmakers and activists were able to secure its access to the public following a five-year campaign in the national legislature and in the streets. The Health Ministry approved its use in April of this year.

ECUADOR: U.S. authorities arrive today in London to seize Julian Assange’s belongings at the Ecuadorian Embassy. Prosecutors were allegedly told by Ecuadorian officials to “help themselves” to Assange’s electronic equipment and other legal papers. Ecuadorian Foreign Minister José Valencia said that the country is “abiding by the standards of international law” in the process. The Embassy hosted the WikiLeaks founder for over seven years. He is now serving a 50-week prison sentence for violating bail.

ARGENTINA: Former president Cristina Fernández de Kirchner announced on Saturday that she will run as vice-president in the upcoming Argentine elections. Currently a senator, Fernández de Kirchner will partner up with Alberto Fernández, a moderate Peronist and her former chief of staff. President Mauricio Macri will seek reelection on Oct. 27 amid a growing economic crisis that has made him deeply unpopular.