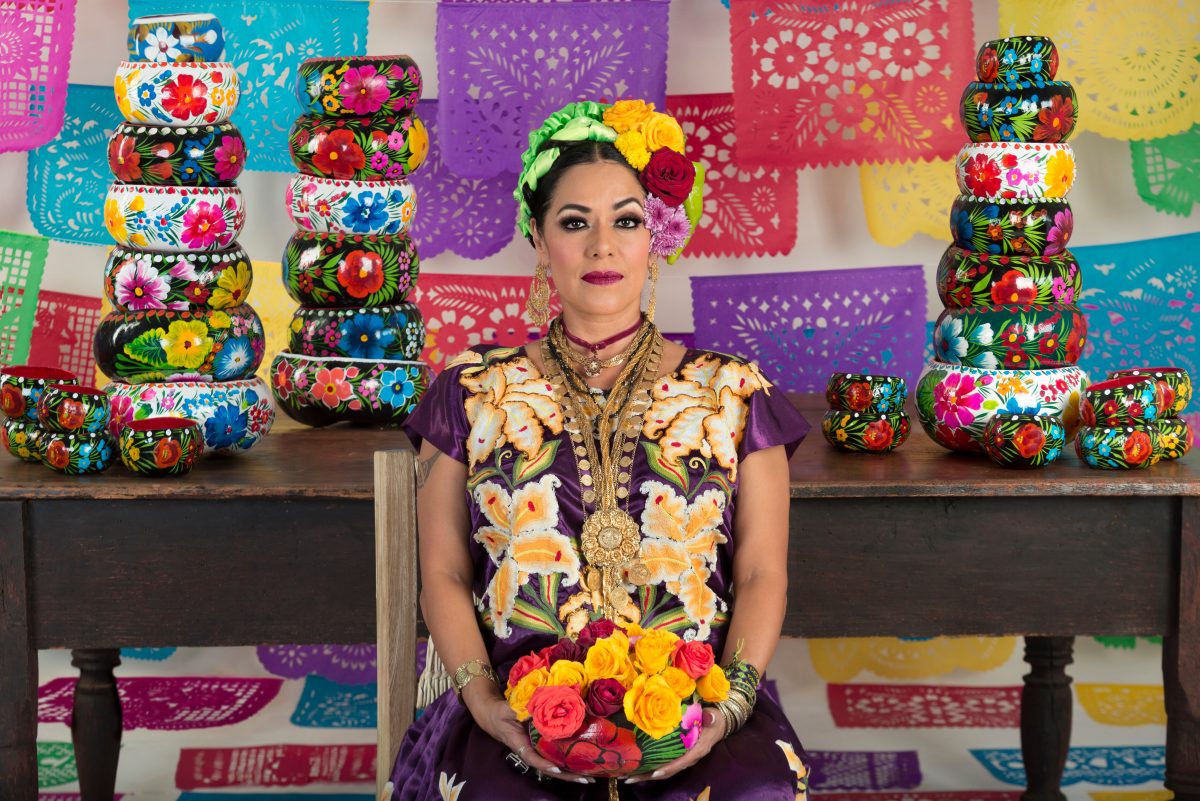 Mexican singer-songwriter Lila Downs recently released Al Chile, her latest album where she pays tribute to food, women, the diversity of Mexican culture and migrants. The project balances joy, fiestas and pain as Downs sings about struggles in the U.S.-Mexico border in the cover of Manu Chao’s “Clandestino,” and joins Norah Jones for the soft lullaby “Dear Someone”—dedicated to one of Jones’ friends who committed suicide.

While these stories are heart-wrenching, the album’s backdrop features lively cumbia tunes and collaboration with Mexican bandas, traditional genres that Downs is known for. She said it’s an album “from the waist down.” The singer worked with producer Camilo Lara for the project, and enlisted over 200 musicians.

Latino USA sat down with Downs to talk about the new album, the diversity of Mexican music, and what keeps her inspired to stay true to her social justice message.

Latino USA: What can you tell us about Al Chile?
Lila Downs: Well, I would say that it’s about saying things “al chile,” which means “directly.” Or spicy as well, I think it carries that meaning. And for men it carries another meaning. I love to do projects that teach me about a particular area that I want to know more about, so this one is about chiles and the variety of chiles we have in Mexico. There are 68 species and [cooking with them] goes way back in time. And I think it also is about character and personality.

Musically, the album is about banda and cumbia. So it’s much more tropical and much more Afro and also Indigenous. And it was great fun. There are over 200 musicians on the album.

LUSA: What was that like working with so many musicians?
LD: We did it in phases. So we started doing the base. We did the musical structure first with a couple of bands who are kind of more like vintage bands from the 70’s and 80’s, also Conjunto Costa Azul de Rigo Tovar, and La Sonora Tropicana, and artists very influenced by Colombian cumbia. And then we went to Oaxaca and recorded some traditional bandas that have big metal sections and snare drums and also bass drums. Then we went to a place called Juchitán in the isthmus and recorded a band of Zapotec children.

LUSA: That sounds amazing, and seems like you had a lot of fun working on this.
LD: We did. We really enjoyed crossing cultures, you know, because within a country, as it happens in many Latin American countries, one area is completely different from another.

In the case of Mexico, even the languages are changing. So that is always a learning experience.

LUSA: When speaking about this album in a press release, you said that some albums are from the heart, and others are from the waist down, and this one is from the waist down. Was that intentional?
LD: It kind of wasn’t. I knew that I wanted to do an album about bandas and I knew Camilo Lara, the producer, like 20 years ago. Because we worked together at EMI and he was in A&R, and then he started doing music as well. So I loved the idea of going into the studio or going out to the field and recording people in their natural circumstance. Because of my anthropologist side, I wanted to have that this time, and Camilo was really into that. So we came back from the from the campo, from the pueblos, the villages that we visited and then did he did his thing in the studio and that made it have the urban flavor and also the rural flavor.

LUSA: You did a cover of Manu Chao’s “Clandestino” for the album. You come into it as a woman and also mentioned the current situation in the U.S. and on the border in the song. Can you talk about the decision behind that?
LD: Yeah, I think that in the more recent migrations, we have seen the woman figure in a very important way. And also the stories about the children looking for the mommies here. And so that has been an issue. They invited me to participate in the Lantern Tour. We did a show here in New York, where Jackson Browne was at. And a few other singer-songwriters, and we supported these detention centers in the sense that you know making people aware of the fact that they are in very difficult conditions. It’s unbelievable. And I think that that’s why I thought I need to find a strong migration piece or write one myself. And this time around, I decided to do “Clandestino.” We asked permission from Manu Chao and he gracefully let us do this slightly different version.

LUSA: This is something you’re known for—bringing social justice into your music. What is the role of an artist in general, when it comes to urgent issues that are happening in our current political landscape?
LD: Well, it’s a difficult issue because when you think of people like Sam Cooke, who did decide to go with his politics. He paid dearly for it—with his life. And I think sometimes there are those of us who feel that we have to fight for a cause and that it’s not enough to just sing a pretty song, you know. And I guess that’s been my turn as well. In Mexico, we’ve had some difficult situations with the violence and with the disappearance of students. And so I’ve written songs about this as well, and I have paid a price for it.

LUSA: Can you talk a little bit about what that price has been?
LD: Well, first of all, there’s censorship of course. But then some people do threaten your life. And then you think about your family and you think, well, this is starting to become about me. And then you think maybe I should just stop talking about it for a while. And I’m not going to give up though (laughs), that’s for sure.

LUSA: What inspires you to continue, even when you’re facing threats or when your family might be put in a precarious situation?
LD: I think there are so many issues that need to be addressed, and so you go elsewhere and, you know, the last album I worked on was about women and women’s issues, and that also had some problems with some people. But you just have to mix it up and figure it out, so that you’re happy as well, because who wants to be a bitter and sad all the time? That’s not really my personality. I’m already too sad naturally so I need to pick myself up, and that’s what this album is about really, picking me up and picking up the community as well. It’s really about community organization and about how fiestas in Latino communities are about everybody pitching in. And I find that to be such an amazing philosophy.