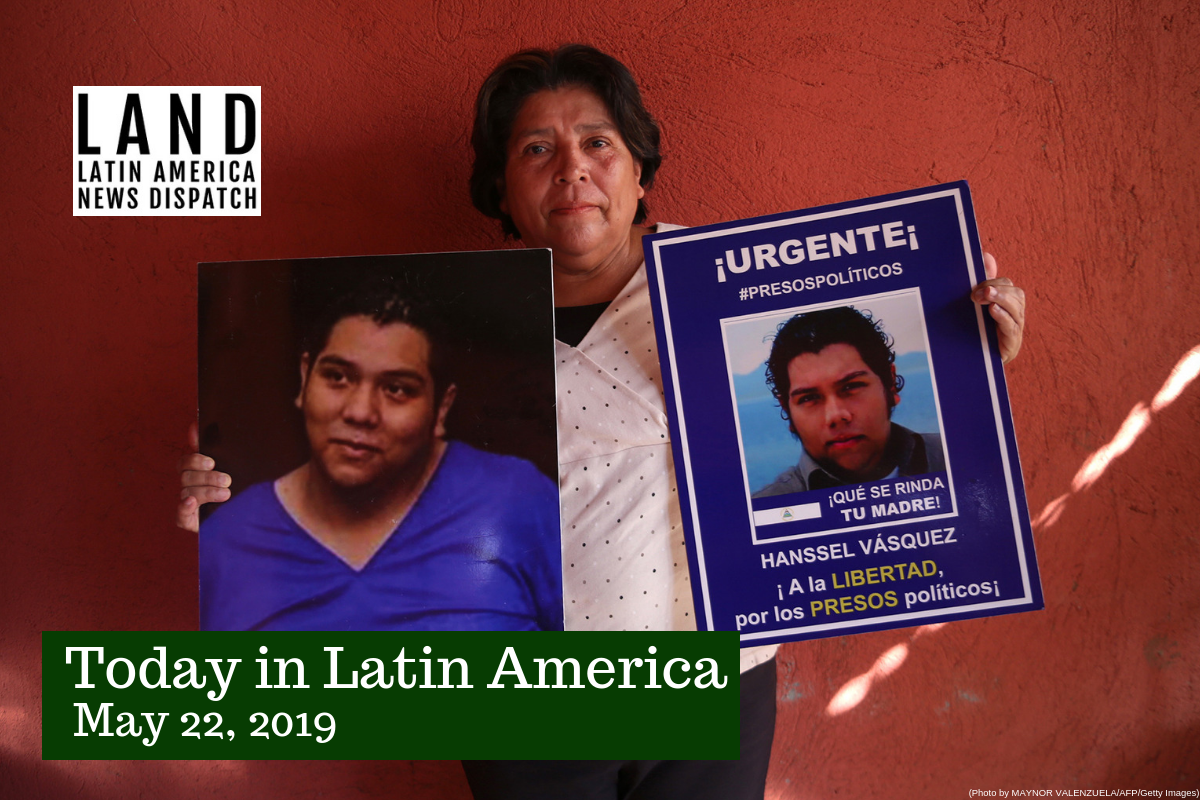 Mother of imprisoned journalist Hansel Vasquez, poses holding pictures of her son at her house in Managua, on March 06, 2019. (Photo by Maynor Valenzuela/AFP/Getty Images)

NICARAGUA: Yesterday, the Organization of American States (OAS) set June 18 as the deadline for President Daniel Ortega’s government to release all political prisoners in Nicaragua. Convened upon the request of the Canadian delegation, the special session took place at the OAS headquarters in Washington, D.C., following the murder of Nicaragua-American activist Eddy Montes on May 17.

A former U.S. Navy veteran, Montes was incarcerated at La Modelo prison for seven months without facing any charges. The fatal incident, which the Nicaragua government alleges was a riot instigated by prisoners as the International Red Cross visited the facilities, also resulted in 17 inmates becoming injured. On Monday, the Ortega administration released 132 prisoners back into house arrest. However, the Inter-American Court on Human Rights (IACHR) says that over 500 people “remain deprived of their liberty” in Nicaragua. The OAS also demanded for “free and transparent elections” to be held soon in Nicaragua.

MEXICO: The director of the country’s public health system resigned yesterday. Germán Martínez Cázares, head of the Mexican Institute of Social Security (IMSS), said on his resignation letter that “pernicious meddling” has hindered the system’s ability to provide services to the Mexican population. Martínez Cázares recommended that the IMSS be “subject to a comprehensive reform” geared towards the needs of users. President Andrés Manuel López Obrador accepted Martínez Cázares’ resignation and said yesterday that he “has options” for a new IMSS director.

MEXICO: The Mexican Commission of Refugee Assistance (COMAR) has reached out to the United Nations for funding assistance as the country grapples with a historic influx of Central American migrants. Operating with a $1.2 million budget, COMAR has a 48-person staff nationwide and is now being tasked to process twice as many asylum applications than in 2018. Additionally, the United States has returned around 6,000 migrants awaiting court hearings for their asylum applications back to Mexico. U.N. funding would allow COMAR to open new offices in Tijuana, Monterrey and Palenque. Another immigration agency, the National Migration Institute, intends to build a new shelter near the country’s southern border with Guatemala.

PUERTO RICO: Nike will not release a Puerto Rico-inspired sneaker following condemnation from a Panamanian indigenous group. Created in honor of the Puerto Rican Day Parade, the sportswear brand withdrew their ‘Puerto Rico’ Air Force 1 model after the indigenous Guna community accused them of copying a traditional multicolored design known as ‘mola’. The shoe was set to be released to the public in June, but the Gunas alleged that Nike did not request permission to use the mola design in their product, thus prompting its withdrawal.

EL SALVADOR: Yesterday, the Salvadoran antitrust authority rejected Mexican telecommunications company América Móvil’s bid to acquire Telefónica’s local unit in El Salvador. Mexican billionaire Carlos Slim, owner of América Móvil, secured a $648 million deal to control the Spanish carrier’s operations in Guatemala and El Salvador. Although being unable to complete the purchase due to lack of regulatory approval in El Salvador, Slim, who already finalized the deal in Guatemala, vowed to try again and file the necessary paperwork later in the summer.

PERU: A new road blockade is underway at Las Bambas Mine in the indigenous Fuerabamba community of southern Peru. The community has been demanding compensation from the copper mine, operated by Chinese giant Minmetals through its local subsidiary MMG Limited, since February this year. After a prosecutor imprisoned three lawyers representing indigenous communities near the mine and the roadblock ended on April 7, protests resumed yesterday after Las Bambas authorities declined to provide the $28 million requested by Fuerabamba representatives.

VENEZUELA: This past month, oil output in Venezuela hit 15-year low. The latest statistics for the month of April show that the embattled country produced an average of 830,000 barrels of crude oil per day, down from a mean of 1.2 million barrels at the beginning of 2019. This marks the lowest production numbers since 2003. Venezuela has dropped down to the fourth-largest oil producer in the region, behind Brazil, Mexico, and Colombia. The last remaining foreign multinationals in the country’s oil industry, like Spain’s Repsol, have begun phasing out their operations in Venezuela.

BRAZIL: Yesterday, Amnesty International issued a statement condemning Jair Bolsonaro’s administration for its “anti-human rights agenda.” Titled ‘A Brazil for Everyone’, the open letter states that the current regime has not respected the rights of indigenous peoples and has failed to protect the lives of vulnerable sectors of the populations by enacting legislation that damages the country’s social fabric. Jurema Werneck, executive director of Amnesty’s Brazil program, said that the measures proposed and adopted by the Bolsonaro administration “raise many concerns” for the future of human rights in the country.

The next hearing will take place on Monday, May 27.