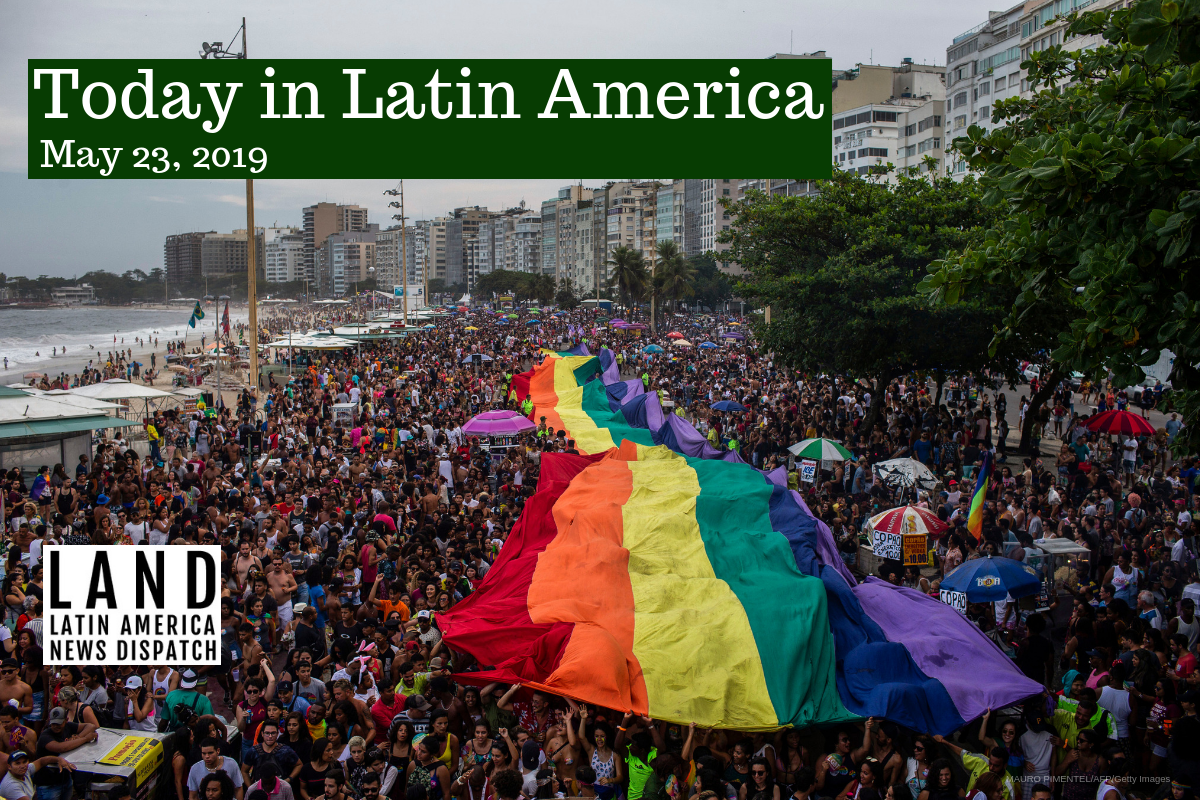 A giant rainbow flag is pictured during the Gay Pride parade at Copacabana beach in Rio de Janeiro, Brazil on September 30, 2018. (Photo by Mauro Pimentel/AFP/Getty Images)

BRAZIL: Amid fears of persecution against the country’s sexual minorities, the Federal Supreme Court (TSF) will rule today whether homophobia and transphobia can be penalized by law. The debate had been at a judicial impasse for seven years until it was reactivated on February 12. It is already known that four out of eleven TSF judges will vote to approve the use of the Racism Law on cases that deal with discrimination on the basis of sexual orientation and gender identity. Yesterday, the Justice and Constitutional Commission of the Brazilian Senate approved this same measure, noting that punitive sentences could range from one to three years in prison.

President Jair Bolsonaro has been an outspoken critic of the LGBTQI+ community, saying that Brazil “must not become a gay tourism paradise.” A recent report by a Brazilian nonprofit counted over 140 deaths caused by homophobia or homophobic attacks in 2019 alone.

U.S.-MEXICO BORDER: Immigration officials acknowledged that a sixth underage migrant, a 10-year old Salvadoran girl, died under their custody last year. The case, which remained unreported until yesterday, details that the unnamed girl had a “history of congenital heart defects” and entered under the care of an immigrant facility in San Antonio in a “medically fragile” state on March 2018. The child would die on September 27, 2018 in a hospital in Omaha, Nebraska.

UNITED STATES: Yesterday, two Congressional committees passed bills that aim to address the ongoing Venezuelan crisis. A bill requesting to grant Venezuelans with Temporary Protection Status (TPS) was submitted by a group of 23 Democratic Senators and Marco Rubio (R-Fl.). TPS emphasizes the “nation’s commitment to supporting a safe democratic transition in Venezuela so that individuals can safely return home soon,” said the lawmakers in a joint statement. The Senate also passed the Venezuela Emergency Relief, Democracy Assistance, and Development (VERDAD) Act, which would provide the country with $400 million in humanitarian aid.

HAITI: Resident physicians at Haiti’s largest public hospital have gone on strike to protest unsanitary and unsafe working conditions. The State University of Haiti Hospital (HUEH) in Port-au-Prince has experienced chronic medicine shortages since its partial collapse in the wake of the 2010 earthquake. Although France and the United States pledged monies to reconstruct the general hospital, the new HUEH remains unfinished. The Haitian government is expected to compensate the doctors-in-training with 9,000 Gourdes per month (around $100) but have not disbursed payments to residents in the last six months. Today, the strike enters its fourth consecutive day.

NICARAGUA: A national strike has been called by the opposition to continue pressuring Daniel Ortega’s regime to give in to their demands. Members of the Ortega administration have threatened domestic banks with sanctions if they join the 24-hour general strike that begins today. Yesterday, a statement released by an association of private Nicaraguan banks said that they would remain open throughout the national strike. Called by the National Unity Blue and White (UNAB), the national walk-out is expected to cost Nicaragua between $15 and $20 million.

COSTA RICA: A rare meteorite that crashed in a Costa Rican town might yield information on the origins of our solar system, scientists said yesterday. Allegedly the size of a washing machine, the meteorite disintegrated as it entered the atmosphere, landing on a private residence in Aguas Zarcas on April 23. The two-pound rock, known as a “mud ball”, is rich in organic compounds and water according to researchers at Arizona State University (ASU). The ASU team said that the event represents the first carbonaceous chondrite meteorite to be recovered, analyzed and catalogued since 1969.

VENEZUELA: Health Minister Carlos Alvarado addressed the World Health Organization (WHO) during a general assembly yesterday, blaming economic sanctions for the dire public health conditions in Venezuela. Alvarado stated that the country has begun relying on the assistance of Cuba, China, Russia, Turkey, Palestine, and Iran to counteract medicine and equipment shortages. The Venezuelan opposition and representatives from the Maduro administration have begun talks in Oslo in an attempt to resolve the sociopolitical unrest through diplomatic means.

PERU:  An international airport near Machu Picchu has become a controversial issue in Peru. On Tuesday, the Peruvian Ministry of Communications received specific proposals from the governments of South Korea, Turkey, Spain and Canada to jointly develop the Chincheros Airport in the city of Cusco. On the other hand, tour operators, archeologists, and locals have petitioned to stop the multi-billion-dollar project in order to preserve ancestral Inca land. Chincheros is already under construction and is expected to be completed in 2021.

CHILE: Yesterday, a carbon monoxide leak killed 6 Brazilian tourists in an apartment in central Santiago. According to local sources, the victims are four adults and two minors from São Paulo who had been renting an Airbnb for a week in the Chilean capital. Ezequiel Gerd Chamorro, Brazilian Consul in Chile, said that he personally went to the six-story building upon receiving an emergency call from one the victims. Authorities found the six bodies in the apartment, which registered high levels of carbon monoxide that could be attributed to the building’s heating system. Yesterday, Santiago registered its lowest temperature in 50 years.