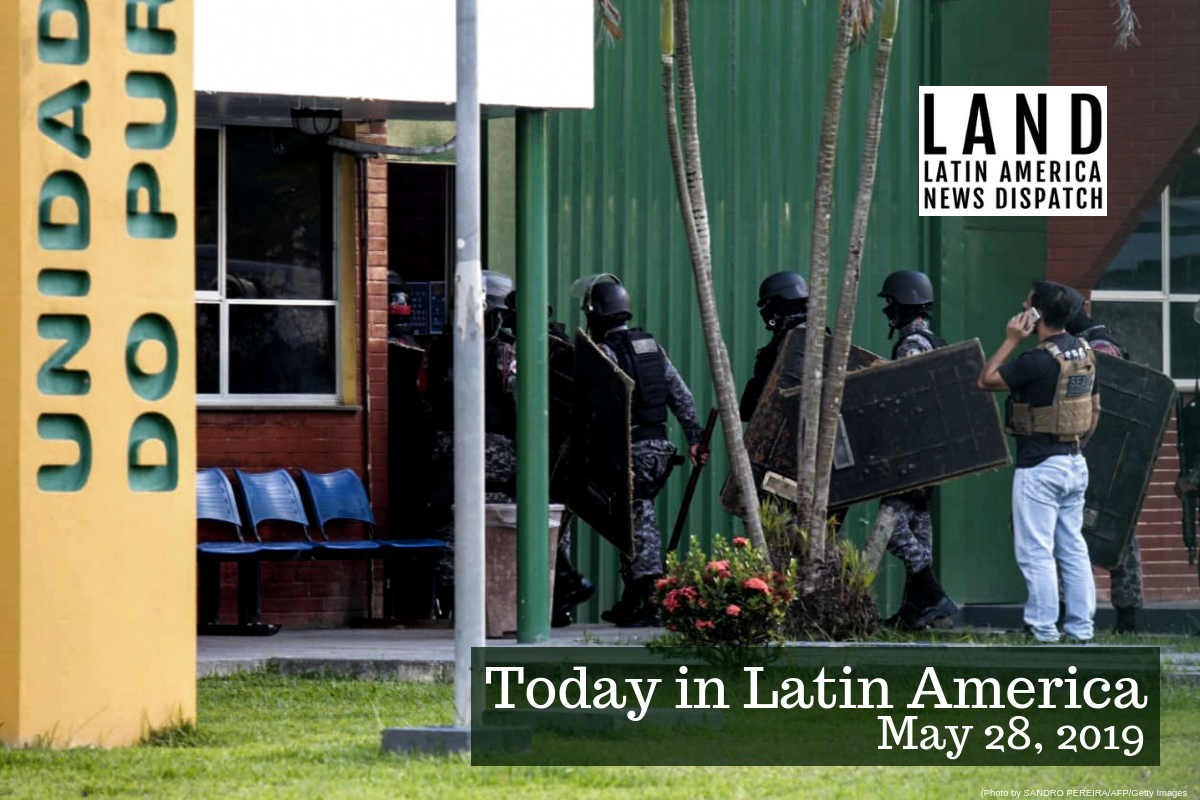 Brazilian riot police prepare to invade the Puraquequara Prison facility at Bela Vista community, Puraquequara neighborhood at the city of Manaus, Amazonas state on May 27, 2019. (Photo by Sandro Pereira/AFP/Getty Images)

BRAZIL: Violence in four state prison riots in northwestern Brazil left 57 inmates dead. 15 prisoners were found dead on Sunday and an additional 42 yesterday in the city of Manaus. The cause of the riots is unknown, although the conflict was led by rival drug factions. Many appeared to show signs of asphyxiation.

Prison riots in early 2017 in Brazil resulted in almost 100 inmates deaths, including 56 in one of the prisons involved in the recent riots. Despite calls to amend the prisons, which suffer from overcrowding and underfunding, the riots demonstrated that the government has made little progress. According to the Brazilian Senate staff, Brazil’s prison population has increased from around 451,000 in 2008 to an estimated 841,000 last year, although the prisons are only equipped for 400,000 inmates.

MEXICO: Vehicles seized by Mexican authorities went into auction yesterday. Organized by the Institute to Return the Stolen to the People, a branch of the Finance Ministry tasked with selling assets seized to drug cartels and tax evaders, the event included 82 vehicles. Seventeen armored SUVs and two Italian sports cars were among the cars being sold in front of the presidential palace in Mexico City. Ricardo Rodríguez Vargas, the Institute’s director, said they expect to collect $30 million pesos ($1.5 million) from the auction, monies that will “later be reinvested” into social programs.

CUBA: Food shortages have continued to plague Cuba as the island is feeling the effects of economic sanctions and inefficient central planning. In a speech last month, President Miguel Díaz-Canel blamed the Trump administration for “asphyxiating financial persecution,” but some economists cite the fact that Cuba imports more than two-thirds of its food supply. Cuba has also lost a vital source of aid in the form of subsidized oil from Venezuela.

REGIONAL: Today, acting U.S. Secretary of Homeland Security Kevin McAleenan will meet with the interior ministers of Guatemala, El Salvador, and Honduras to discuss the “unprecedented influx of migrants” from the Northern Triangle. The agenda for the meeting has yet to be revealed. McAleenan, who is the former commissioner for U.S. Customs and Border Protection (CBP), met yesterday with President Jimmy Morales in Guatemala City. The meetings come in the wake of the death of the sixth migrant child to die under CBP custody in the last six months.

HONDURAS: Educators and health workers took to the streets of various cities across Honduras, demanding free and high-quality education and health services. Roadblocks were erected in Tegucigalpa and San Pedro Sula. The coalition of workers also insists that the government of Juan Orlando Hernández should provide them with living wages. Honduran Minister of Education Arnaldo Bueso threatened teachers participating in the demonstrations with sanctions if they do not show up for classes today.

REGIONAL: Peru, Colombia, Bolivia, and Ecuador have protested a decision to grant the .amazon domain to the tech giant Amazon, calling it “inadequate governance of the internet” as the label designates a geographic region of the continent, not an online retailer. The U.S. company has sought to acquire the rights to the domain since 2012. The Internet Corporation for Assigned Names and Numbers (ICANN), which oversees the internet naming protocols, recently approved Amazon’s request pending a 30-day period for public comment. The countries have criticized ICANN’s decision as a “grave precedent prioritizing corporate interests.”

PERU/COLOMBIA: Together for an event commemorating the fiftieth anniversary of the Andean Community in Lima, Peruvian President Martín Vizcarra and Colombian Preisdent Iván Duque, issued a joint plea to the international community to help their “address the situation” of Venezuelan asylum-seekers in their respective countries. President Vizcarra said that both countries are experiencing “the worst migrant crisis in Latin America’s recent history.” The United Nations reports that 1.3 million Venezuelans have fled to Colombia, whereas 700,000 have fled to Peru, following the sociopolitical unrest in the country.

ARGENTINA: State-owned Aerolíneas Argentinas will cancel all flights tomorrow. Thirty-three thousand passengers are expected to be affected by the cancellation of 330 domestic and international flights. Latam, a Chilean carrier with a significant presence in Argentina, also canceled a fifth of its international flights. Called by Argentina’s largest trade union, the General Confederation of Labor (CGT), the national strike will come into effect today at midnight.

BRAZIL: An environmental group reported that deforestation in the Amazon increased 20 percent in the last nine months. Imazon, a non-profit research institute based in Belém, said that the increase is due to uncontrolled logging, coupled with the current administration’s skepticism on the reality of climate change. Over 2,169 square kilometers (837 square miles) have been lost between August 2018 and April 2019, according to satellite imagery provided by Imazon.