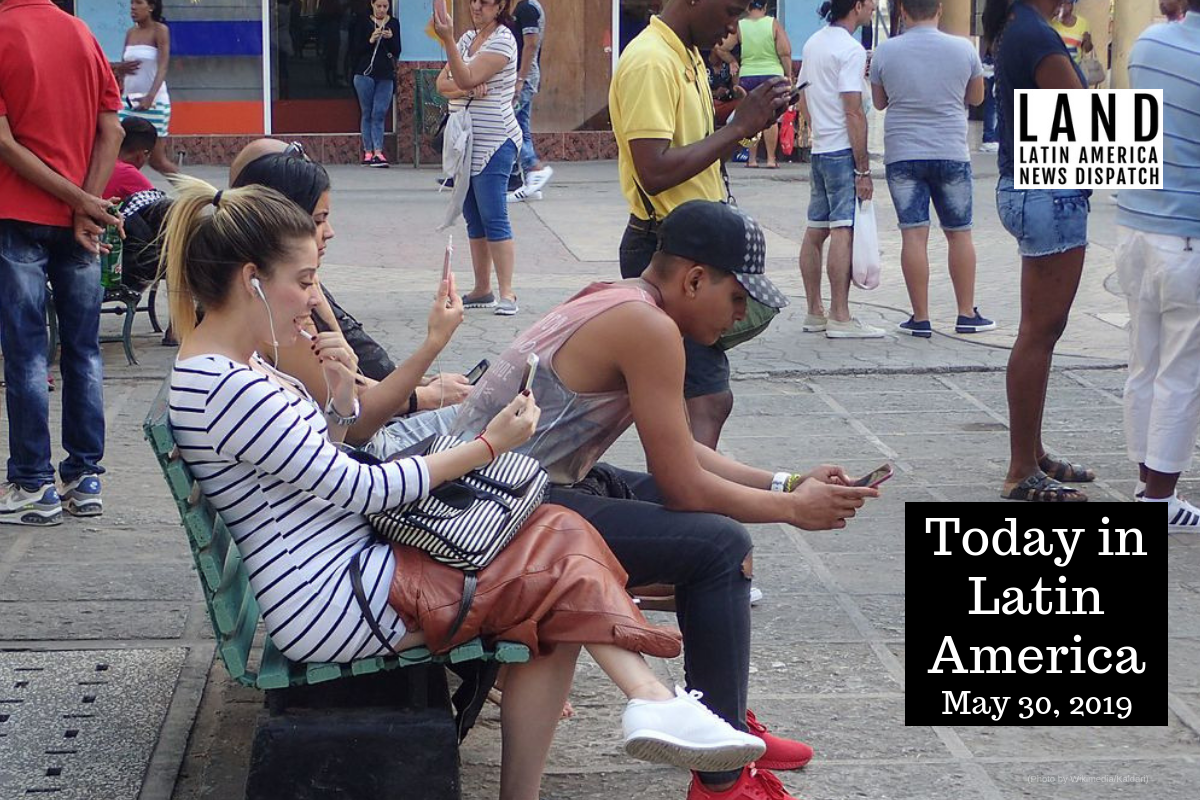 People using the internet in a public park in Havana, Cuba. (Photo by Kaldari via Wikimedia Commons)

CUBA: In a historic first, Cuba will allow the privatization of Wi-Fi networks on the island. The decision was announced via Twitter by the Ministry of Communications (MINCOM), who further eased internet restrictions by also allowing routers to be imported into Cuba.

The MINCOM said Cubans would be able to set up Wi-Fi networks in their residences and share their internet connections with their neighbors. Private cybercafes were also legalized. Users will only be able to get connectivity through one internet provider: state-owned telecommunications company Etecsa. These new rules will go into effect on July 29. Cubans were only granted access to mobile internet in December 2018.

U.S.-MEXICO BORDER: Trial against an activist who helped migrants in the U.S.-Mexico border began yesterday afternoon. Scott Warren, a humanitarian aid volunteer from Arizona, faces felony charges for allowing two undocumented migrants access to food, water and a place to sleep in 2018. Prosecutors argue that Kristian Pérez-Villanueva and José Arnaldo Sacaria-Goday, the two Central American migrants aided by Warren, were “never really in distress.” Warren is part of No More Deaths, a faith-based organization that couples its desert aid with a “critique of U.S. border policy,” according to The Intercept.

MEXICO: A road traffic accident between a truck and a tour bus left at least 21 dead and 30 injured in Veracruz yesterday. Most of the victims are from the southern state of Chiapas. They were returning from a religious pilgrimage to the Basilica of Our Lady of Guadalupe in the Mexican capital. Both vehicles caught fire upon colliding in Cumbres de Maltrata, a segment of the Acatzingo-Ciudad Mendoza Highway known for low visibility.

PUERTO RICO: The After María documentary, released on Netflix this past week, has prompted backlash among members of the Puerto Rican community in the island and abroad. Online petitions demanding for the documentary to be taken off the streaming platform have emerged after many Puerto Ricans believe the film fails to adequately portray the events that followed the category-5 hurricane on September 2017. Local newspaper El Nuevo Día emphasized that the documentary “does not show the pain” that Puerto Ricans experienced in the aftermath of María, perpetuating the stereotype that boricuas tend to rely on federal aid.

GUATEMALA: Yesterday, Guatemalan authorities announced they busted a human-trafficking ring that allegedly moved migrants through the country, taking a total sum of $10 million in such undertakings. The special human-trafficking unit conducted 12 raids across four Guatemalan cities with the support of Homeland Security Investigations, apprehending over 50 individuals. Known as the Mérida group, the network’s “crossing rates” ranged from $12,500 for an adult and $3,500 for an infant. The announcement coincided with the visit of the acting secretary of Homeland Security, Kevin McAleenan, in Guatemala to meet with interior ministers from the Northern Triangle.

COSTA RICA: President Carlos Alvarado traveled to Berlin this week to meet with German Chancellor Angela Merkel. The Costa Rican president held a meeting on Monday with Chancellor Merkel, where they agreed to strengthen ties between the two nations by cooperating in education and technology. Alvarado asked for “international attention” to be given to the issues of Nicaragua and Venezuela, both which have contributed to a recent uptick in incoming migrants to Costa Rica.

VENEZUELA: Yesterday, the Central Bank of Venezuela released economic data for the first time since 2015. The country claimed inflation of 130,060%, the highest in Venezuelan history. The economy contracted 19.2 percent during the first nine months of 2018, as compared to the year earlier. Gross domestic product in the country has fallen every quarter since 2014. Yesterday, the meetings between the government and the opposition in Norway ended without an agreement.

COLOMBIA: The country’s Supreme Court ordered the “immediate release” of a former guerrilla leader sought in the U.S. for conspiring to ship cocaine. Colombia’s top court argued yesterday that former FARC combatant and peace negotiator Seuxis Paucias Hernández Solarte, known by his alias ‘Jesús Santrich,’ is protected by a constitutional clause due to his current status as an elected congressman. The unanimous ruling would allow Santrich to be released today, according to Colombian news outlets.

BRAZIL: Minister of Justice Sergio Moro lost financial oversight powers late Tuesday night after Congress voted to reduce the reach of his position. The Senate approved to restructure the federal government, reducing the number of ministries from 29 to 22. Brazilian lawmakers also agreed to move the Council for Financial Activities Control (Coaf) from the Ministry of Justice to the Ministry of Economy, thus weakening Moro’s ability to combat money-laundering and financial fraud from his position. Moro led prosecutorial efforts during the infamous ‘Operation Carwash’ investigations, Brazil’s biggest-ever corruption probe.

CHILE: Chilean authorities recently upgraded Puerto Williams to a “city”, thus becoming the southernmost city in the hemisphere. Puerto Williams nudges out Ushuaia, a fishing town in neighboring Argentina, to hold such title. Surrounded by one of the world’s best-maintained ecosystems, the Chilean naval city sits on the Beagle Channel, a historic strait in Tierra del Fuego first surveyed by Charles Darwin.