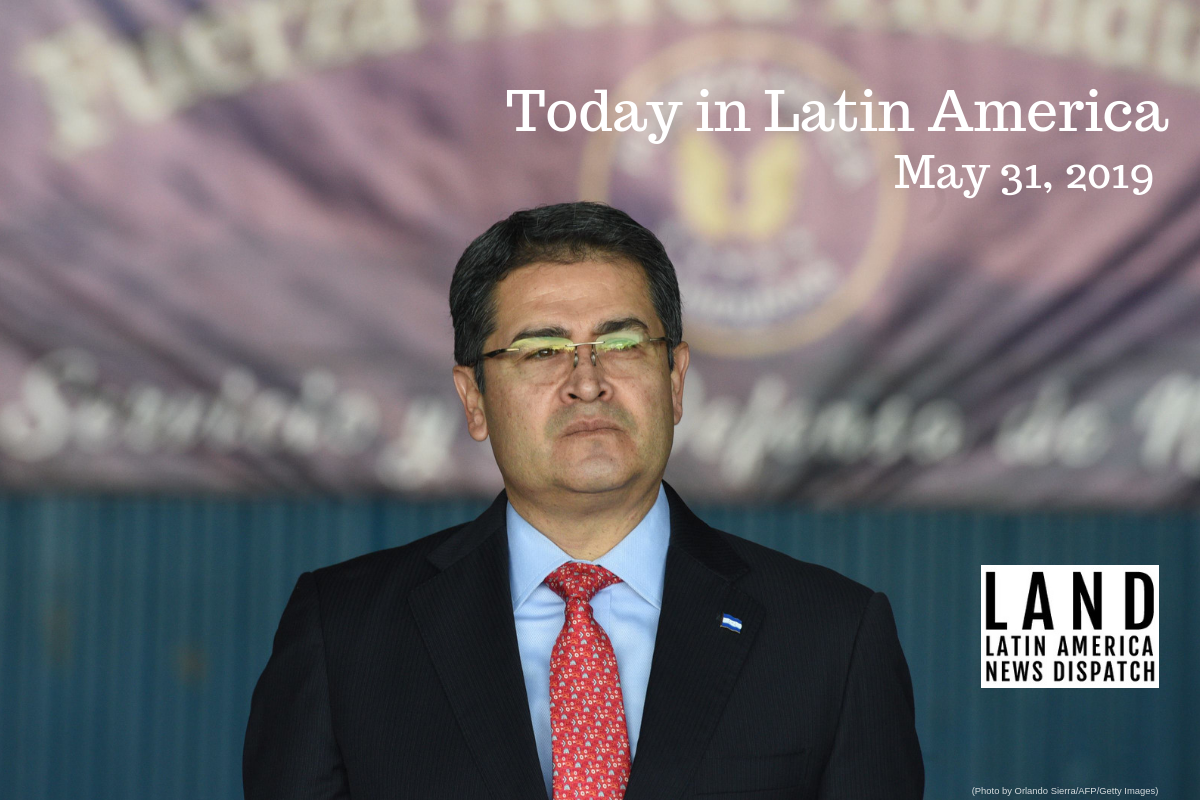 HONDURAS: Court documents show that president Juan Orlando Hernández has been the target of Drug Enforcement Administration (DEA) investigations since 2015. The probe into a “politically-connected drug-trafficking operation in Honduras,” carried out by the U.S. Southern Court District of New York, reached some of the president’s closest advisors. Documents were filed on Tuesday as part of a case against President Hernández’ brother, Antonio Hernández, who has recently been indicted by the DEA for conspiring to bring cocaine into the United States.

Meanwhile, thousands of physicians and educators took to the streets of Honduras for the third day in a row, demanding that their working conditions be improved by the Hernández administration. Twenty-five injuries were reported after protesters clashed with police. Protestors demanded Hernández’ resignation.

REGION: Ratification processes for the new United States-Mexico-Canada (USMCA) trade deal began yesterday. U.S. Vice President Mike Pence visited Ottawa yesterday, where he met with Canadian Prime Minister Justin Trudeau to discuss the USMCA. Hoping to gain momentum with the trade deal, Pence said that relations with Canada “had never been stronger.” Meanwhile, Mexican President Andrés Manuel López Obrador handed the proposal for the “convenient trade deal” to the Senate yesterday. However, President Donald Trump announced that five percent tariffs would be applied to all Mexican exports coming into the U.S. starting June 10, a move that could jeopardize the ratification of the USMCA.

HAITI: Yesterday, the chambers of the Haitian parliament were vandalized by four members of the opposition who interrupted the Senate’s third attempt to confirm Jean-Michel Lapin as Haiti’s Prime Minister. Opposition MPs dragged chairs and desks into the lawn thirty minutes into the session. Members of the opposition demanded that all cabinet members who served under former Prime Minister Jean-Henry Céant to be removed before Lapin assumes office. A new meeting is planned for next week.

EL SALVADOR: Yesterday, in the early morning, the U.S. Geological Survey registered a 6.6 earthquake off the coast of El Salvador. The 40-second tremor sparked panic in the local population, evacuating hospitals and partially damaging some buildings along the Salvadoran coastline. A tsunami warning was issued as sea levels rose 11 inches. Twenty-seven aftershocks were recorded following the seism.

NICARAGUA: The Nicaraguan government released 50 more political prisoners into house arrest yesterday. The International Committee of the Red Cross said in a statement that it “monitored the process” that released forty-nine men and one woman. All of the released individuals, who are members of the opposition, were labeled as “terrorists” by Daniel Ortega’s regime. Three hundred eighty-six prisoners have now been released since the protests first erupted in April 2018.

PERU: President Martín Vizcarra threatened to dissolve Congress if Peruvian lawmakers fail to approve anti-corruption laws. Vizcarra invoked a constitutional clause that would allow him to call new legislative elections if his reforms —which include ending parliamentary impunity and cleaning up campaign finance— are not passed. Perú’s last five presidents, who served in the country’s highest office for a cumulative 33 years, have each been investigated, prosecuted, or sentence in graft cases. One recent example had lethal consequences when former President Alan García, aced with possible prison time, committed suicide in April.

COLOMBIA/VENEZUELA: After weeks of tensions in the Tienditas International Bridge, which included a military blockade in February, U.S. humanitarian aid designated for Venezuela will be distributed in Colombia. Officials from Colombia’s disaster management agency (UNGRD) said yesterday the 400 tonnes of food and medicines aid airlifted by the U.S. would be distributed among Venezuelans who sought refuge in Colombia. Priority will be given to “those individuals who show critical signs of malnutrition,” said the UNGRD on a press release.

BRAZIL: For the first time since 2016, Brazil’s economy shrank. Gross domestic product contracted 0.2 percent in the first quarter of the year. The data is aligned with the forecasts, although the stagnated economy is a cause for concern for President Jair Bolsonaro. Minister of Economy Paulo Guedes said that the recovery “hinges on fiscal reforms,” which the current administration vowed to implement throughout its campaign trail.