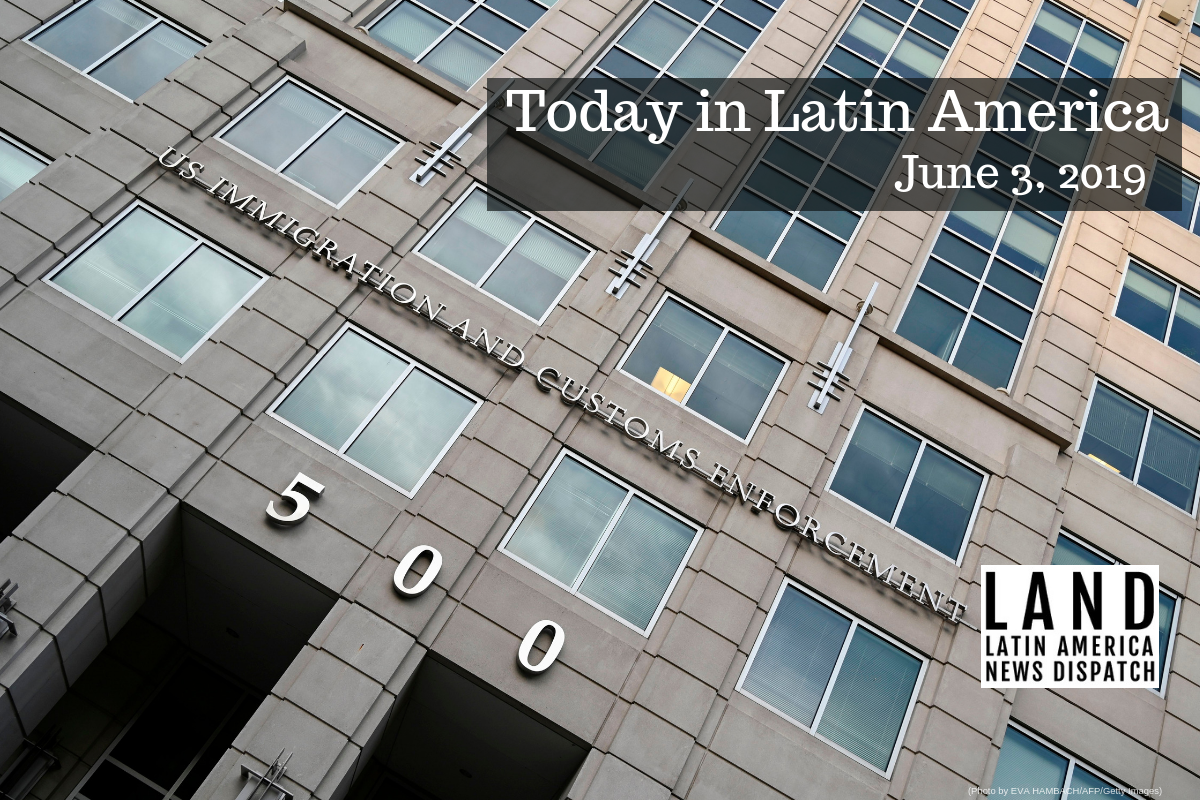 A U.S. Immigration and Customs Enforcement building in Washington, DC May 09, 2019. (Photo by Eva Hambach/AFP/Getty Images)

U.S.-MEXICO BORDER: LGBTQ advocates reported that Johana Medina, a transgender asylum seeker from El Salvador, died in a Texas hospital after being under the custody of Immigration and Customs Enforcement (ICE) for nearly three months. Diversidad Sin Fronteras (Diversity Without Borders), a collective focused on helping LGBTQ migrants and refugees, said that Medina requested access to medical attention after she experienced complications from HIV/AIDS during the time she was held at a detention center in New Mexico. Medina was eventually transferred to a hospital in El Paso, Texas, where she passed away on Saturday night.

Medina’s death coincides with the first day of Pride Month. The announcement also comes a little over a year after the passing of Roxsana Hernández, a transgender asylum seeker from Honduras who passed away on May 25, 2018. Hernández, who was HIV positive, spent sixteen days at an ICE detention facility in New Mexico before dying of gastrointestinal problems.

UNITED STATES: U.S. visa applications will now require submission of personal social media information. The rules, adopted this past Friday by the State Department, would demand that individuals certify their social media names and other contact information, like personal phone numbers and five years worth of email addresses. Applicants that provide false information could face “serious immigration consequences”, according to an official at the State Department.

REGIONAL: In an effort to defuse trade tensions, Mexico’s Minister of Economy Graciela Márquez will meet with Wilbur Ross, Secretary of the U.S. Chamber of Commerce, in Washington today. Márquez announced the meeting via Twitter after she met with Ross in San Salvador for Nayib Bukele’s presidential inauguration.

The meeting comes as President Donald Trump threatened to enact a punitive 5 percent tariff on all exported Mexican goods if Mexico refuses to block Central American migrants from crossing into the United States. Trump’s remarks have slowed down the prospects of the new North American trade deal from being ratified.

HAITI: An association of Haitian judges has accused President Jovenel Moïse of being involved in an embezzlement scheme that mismanaged public accounts financed by Venezuelan aid money. A 600-page auditing report released by the Superior Court of Accounts and Administrative Litigation (CSC/CA) shows how the Haitian government granted state contracts to companies with ties to President Moïse using funds obtained through Petrocaribe, a Venezuela-led initiative that sold oil at cut-rate prices to member countries. The CSC/CA labeled the case a “misappropriation scheme” with President Moïse at the center.

EL SALVADOR: On Saturday, Nayib Bukele was inaugurated as president of El Salvador. His cabinet of ministers will be composed of eight women and eight men. One of Bukele’s first actions as president was the removal of Colonel Domingo Monterrosa’s name from the army barracks in San Miguel, a town in eastern El Salvador. Monterrosa led the U.S.-trained Atlacatl Battalion in their offensive against the town of El Mozote, which resulted in thousands of civilians deaths.

HONDURAS: Anti-government protesters burned tires at the entrance of the U.S. Embassy in Tegucigalpa on Friday. Aside from the access gate to the embassy, no damages were reported. Embassy officers were asked to remain at home, as nationwide demonstrations against the privatization of health and education sectors continued in Honduras. The protests come in the wake of information being released that shows President Juan Orlando Hernández as the object of DEA investigations for international drug trafficking.

ECUADOR: Yesterday, Richard Carapaz won the Giro d’Italia, becoming the first Ecuadorean cyclist to win a Grand Tour. Carapaz won the 21-stage competition that began on May 11 by a 1-minute margin over Francesco Nibali from Italy. The 26-year-old rider, who represents the Movistar cycling team, became the second South American to win the Giro after Colombian cyclist Nairo Quintana achieved the feat in 2014.

VENEZUELA: The Canadian Embassy in Caracas has suspended its operations. Minister of Foreign Affairs Chrystia Freeland indicated in a press release that the decision is a consequence of Nicolás Maduro’s government not renewing visas for Canadian diplomats in Venezuela. The U.S. closed its embassy in the country back in March.

CHILE: One person was killed and dozens injured after a series of tornadoes destroyed houses and vehicles in the towns of Los Ángeles and Concepción, located in the south of Chile. According to the Chilean Office of National Emergencies (Onemi), over a thousand households were damaged in the Biobío region. Onemi also reported that watersprouts, a funnel-shaped cloud that forms over a body of water, were recorded in the coastal areas of Biobío.

BRAZIL: Brazillian footballer Neymar has been accused of rape by a woman in a São Paulo court. Police documents say that the incident took place in Paris on May 15, where the Paris Saint-Germain striker drunkenly assaulted the unidentified woman at a hotel in the French capital. The player “categorically” denied rape allegations in a 7-minute video posted to his Instagram account.