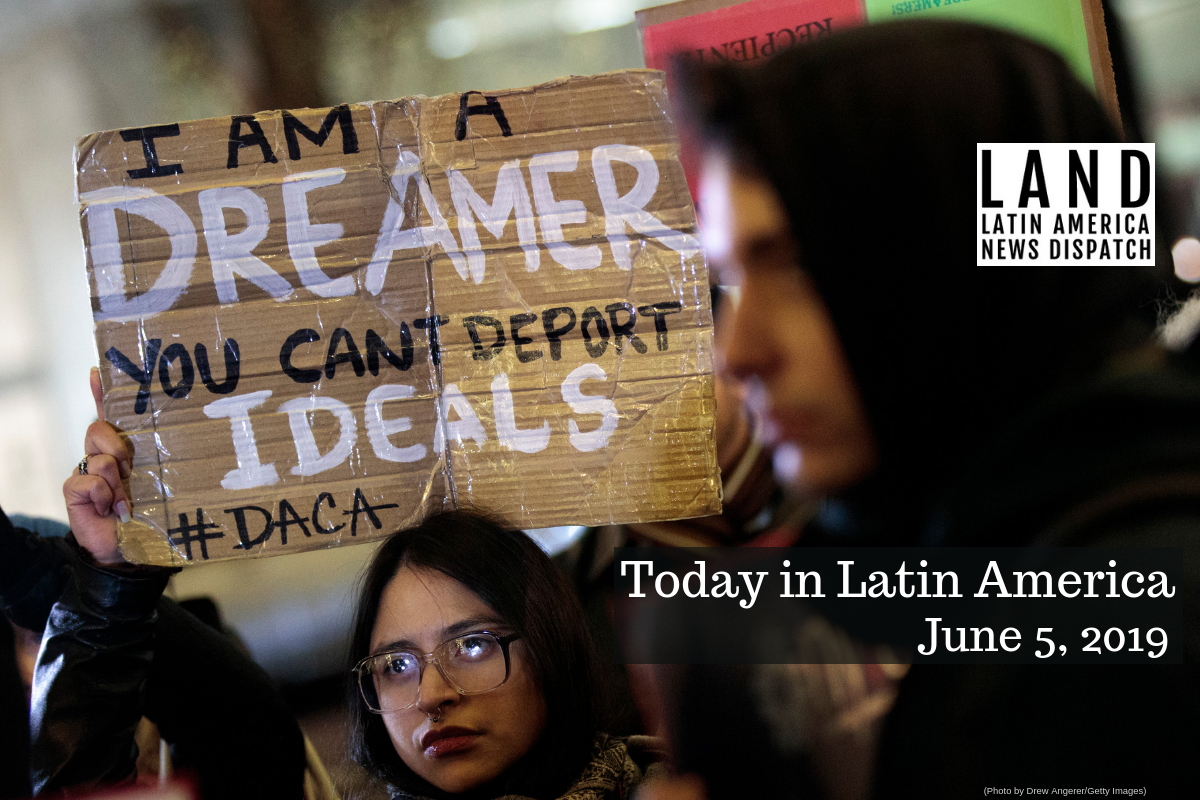 Activists rally for the passage of a "clean" Dream Act, one without additional security or enforcement measures. January 10, 2018 in New York City. (Photo by Drew Angerer/Getty Images)

UNITED STATES: Congress voted to approve an immigration reform bill that would provide a pathway to citizenship for young undocumented immigrants with the Deferred Action Childhood Arrival (DACA) status. The American Dream and Promise Act passed 237-187, with seven Republicans representatives joining all House Democrats in favor of paving a way to achieve legal status for over 2 million people in the country. Criteria for eligibility include living continuously in the United States for the last four years and having arrived in the country before the age of 18.

The bill also includes Temporary Protected Status (TPS) recipients, which include Haitian, Salvadoran, and Honduran nationals, as well as Liberian refugees under the Deferred Enforced Departure (DED) status, which would now be able to gain lawful permanent resident status if they have lived in the U.S. for over three years. The motion will now be reviewed in the Senate.

MEXICO: Gender-specific uniforms in public schools to be banned in Mexico City, Mayor Claudia Sheinbaum announced yesterday. Boys and girls will now be able to choose between pants and skirts as their daily school uniform without facing any repercussions. The decision has created a stir on social media and among civil society groups, where opponents have been quick to criticize the “imposition of gender ideology” on the Mexican youth. Sheinbaum said the decision was made in order to “promote equality of rights” among students.

MEXICO: 400 Central American migrants crossed the Suchiate River into Mexico yesterday. Mostly Honduran, half of the caravan members registered themselves with Mexican immigration authorities, while the other reportedly walked towards Ciudad Hidalgo’s main square to rest. The group of migrants departed San Pedro Sula, a city in northern Honduras, on June 1.

CUBA: A new travel policy goes into effect today, banning any cruise ship leaving from the U.S. on a sojourn to Cuba. The prohibition also extends to yachts and private planes from traveling to the island. In a statement published online, the State Department “holds the Cuban regime accountable” for its contribution “to the man-made crisis led by Nicolás Maduro” in Venezuela. The travel ban also includes group tours and students heading to the island on educational exchange programs.

TRINIDAD AND TOBAGO: The Trinidadian government has opened three locations where Venezuelan asylum-seekers can register and legalize their status in the twin-island nation. The initiative, which began on May 31 and expires on June 14, will offer Venezuelans a “welcome amnesty” that includes access to one-year work permits that will facilitate their job search in the islands. Recent reports have shown that Venezuelans have been subject to exploitation in Trinidad and Tobago after fleeing their country. On May 21, the police launched an investigation into an alleged human trafficking ring involving five Venezuelan women in Los Iros, a town in South Trinidad.

PANAMA: The owner of a hotel in Panama City previously operated by the Trump Organization said that the company avoided taxes in Panama by “making false claims to the Panamanian tax authorities.” Orestes Fintiklis, who made headlines last year after forcing Trump Organization officials out of the hotel formerly known as the Trump Ocean Club, filed a lawsuit in a Manhattan federal court on Monday alleging that Trump underreported his employees’ salaries. Fintiklis’ suit also claims that the hotel operators did not pay the 12.5 percent management fees.

VENEZUELA: The wife and daughter of prominent opposition figure Leopoldo López arrived in Spain yesterday. Lilian Tintori and her daughter Federica Antonieta landed in Madrid in “perfect health” according to Spanish authorities. Tintori and López were hosted as guests in the Spanish Embassy in Caracas on April 30 after a failed uprising led by opposition leader Juan Guaidó. A Venezuelan court sentenced López to 13 years in prison in 2015 after calling for an anti-government demonstration. In 2017, he was transferred into house arrest.

CHILE: Chilean teachers launched an “indefinite strike” demanding better working conditions and a living wage this past Monday. The Chilean Teachers’ Association (CPC) said that 80 percent of the country’s educators had joined the call for an improved public education system. CPC also voiced its concern with a recent curricular reform proposed by the Education Ministry, which would make subjects like art and history optional for high school juniors and seniors. The strike, which continues today, is expected to go on until Friday.

ARGENTINA: After eight years of judicial processes, the Argentinean Supreme Court upheld the law protecting glaciers in the country after a mining company questioned its constitutionality. In 2011, Canadian company Barrick Gold Corporation argued that the bill would affect its mining concessions near glaciers in the Argentina-Chile border. The court gave a unanimous ruling that will now safeguard glacial areas from 44 other mining projects.