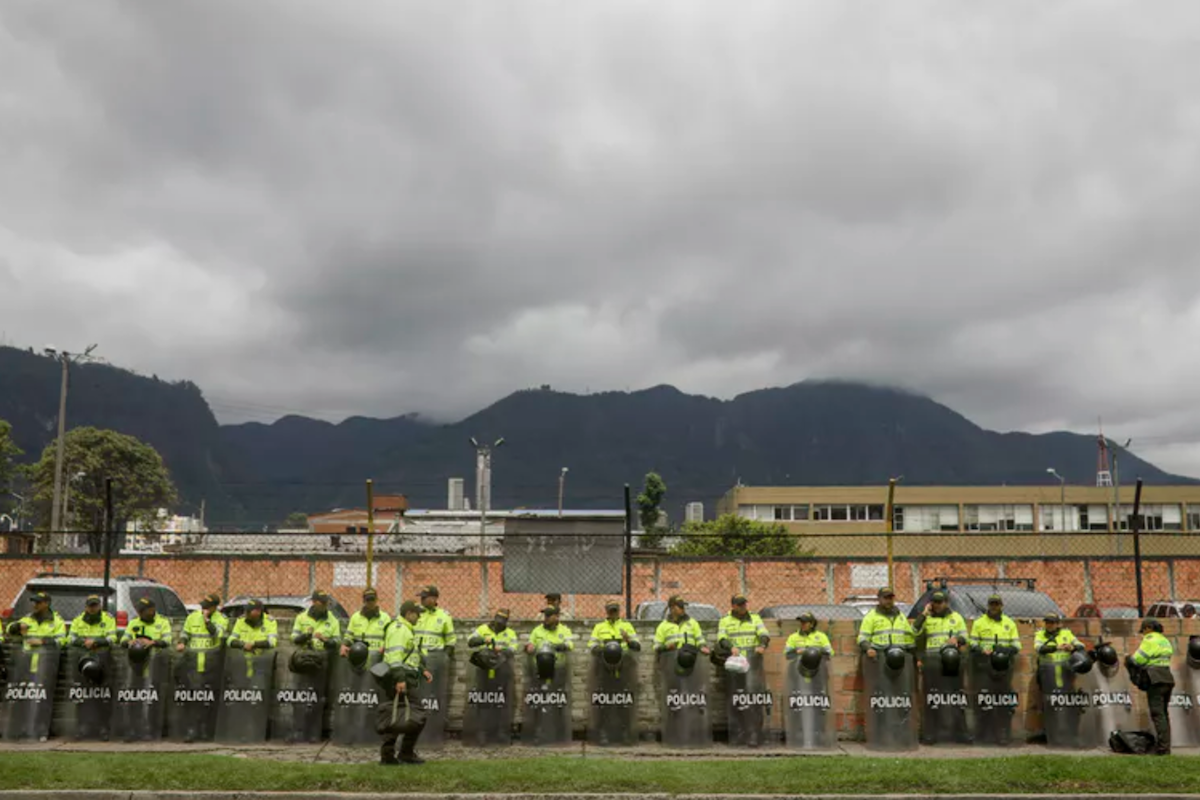 Police protect a judicial complex where former FARC rebel leader Seuxis Hernández was standing trial on May 20, 2019. The former peace negotiator has been arrested on drug charges and is now fighting extradition to the United States. (Photo by AP/Ivan Valencia)

Thousands of Colombian militants and soldiers will have their day in court.

A panel of judges ruled on May 29 that a special peace tribunal established in Colombia’s landmark 2016 peace deal with the FARC guerrillas must proceed under the agreed-upon terms. It cannot be altered to narrow its scope or make sentencing harsher, as Colombia’s new president, Iván Duque, had requested.

Colombia’s transitional justice system, which resembles processes used in nations like South Africa and Guatemala, will judge FARC militants and members of the armed forces for crimes perpetrated during Colombia’s 52-year conflict. But the emphasis is on making amends for harm caused to civilians—not on punishing combat-related offenses, such as a guerrilla killing a soldier in combat.

Nearly all of the 6,804 FARC guerrillas who disarmed in 2016 and settled in government-run “reintegration camps” must now surrender themselves to the peace tribunal, swear to testify honestly and be interviewed by Colombia’s new truth commission.

Fighters who are determined not to have committed human rights violations during the conflict, and to have obeyed the law since the peace deal, may leave the reintegration camps to rejoin society. All others will be sentenced to jail or to community service in the areas they once terrorized.

This will happen despite the attitude of Duque, who thinks the transitional justice system is too lenient. It is one of many provisions of the landmark Colombian peace deal he has moved to weaken, or even abandon, since taking office in August 2018.

But the deal was rejected at referendum before being passed by Congress in November 2016, and it remains controversial.

Its goals include exposing and documenting the atrocities of the Colombian conflict, offering reparations to war victims and revitalizing the long-neglected rural areas terrorized by different armed groups. It also aims to turn a Marxist insurgency into a political party and to reconcile Colombians by reintegrating rebel fighters back into society.

Conflict researchers like myself have found that this comprehensive truth and justice process stands a good chance of bringing lasting peace and reconciliation.

At first, it seemed to be working.

Violence dropped markedly in 2017, Colombia’s safest year since 1975. Social movements —long repressed by a state that labeled all dissent as the seeds of insurgent rebellion— blossomed. And a robust public debate began around corruption and public services, both concerns long buried by militant violence.

Then Duque took office promising to “correct” Colombia’s peace agreement. As a senator, he helped lead the “Vote No” initiative that narrowly derailed the accord at referendum.

Under Duque’s leadership, the government’s progress on fulfilling its commitments to peace has slowed to nearly a standstill.

Duque has appointed “No” campaign loyalists to lead the agencies that must implement the agreement and left their budgets underfunded. He has voiced opposition to a Santos administration commitment to help farmers who grow illegal coca leaf transition to legal crops like coffee and ignored promises to boost economic investment in rural areas.

And Duque’s conservative Democratic Center party played a central role in vetoing a peace accord agreement that would have given more seats in Congress to remote rural areas of Colombia – places so long neglected by the government that militant groups like the FARC controlled the territory.

The president’s foot-dragging comes after legislative delays and last year’s election had already substantially slowed the peace process. One-third of the peace deal’s 578 provisions have not even begun to be implemented, according to Notre Dame University’s Kroc Institute for International Peace Studies.

Duque also appears to be considering a demand from the United States to extradite FARC guerrillas accused of involvement in international drug trafficking.

Currently, Colombian law only allows for the extradition of former guerrillas who committed drug crimes after the peace agreement was signed. Those who did so during the conflict, as a means to finance the FARC’s insurgency, will be dealt with through the transitional justice system.

The Risk of a Derailed Peace

Members of the peace delegation that reached the FARC agreement say the government’s actions compromise peace itself.

According to a recent Gallup poll, 55% of Colombians believe the government will not fulfill its commitments to the peace process. Sixty-two percent believe the FARC will not hold up its end of the deal.

As trust between the two sides deteriorates, violence in Colombia is climbing.

Murders rose 3% in 2018, from 12,066 to 12,458. That figure includes a wave of attacks against activists, peasant organizers and Afro-Colombian community leaders who have vocally defended the peace deal, 226 of whom were killed last year.

An estimated 1,700 former guerrillas have returned to armed struggle, joining one of Colombia’s many other militant groups, according to the think tank Fundacion Ideas Para la Paz. Several high-profile leaders —including Iván Márquez, who led the FARC’s peace negotiations— have gone into hiding.

In February, a bombing by the ELN guerrillas in Bogotá killed 21 police personnel, confirming that domestic terrorism remains a threat in Colombia.

In response to climbing violence, Colombia’s armed forces have gotten more violent, too.

In early 2019, Major Gen. Nicacio Martínez Espinel ordered soldiers to “double the number of criminals they kill, capture or force to surrender,” The New York Times has reported.

The reporting raised fear that Colombia would revert to the era of “false positives,” when members of Colombia’s armed forces in the early 2000’s killed unarmed civilians, dressing their dead bodies in militant fatigues to meet their kill quota.

According to some estimates, soldiers murdered 10,000 innocent Colombians to earn bonuses, holidays and promotions.

A Long Path to Peace

Countries commonly suffer violence as they transition out of armed conflict, making strong political leadership crucial for a peace process to succeed.

In doing so, Mandela made the prospect of peace seem real. He virtually willed it into being.

Colombia’s acrimonious post-accord government is leading the country in a different direction, empowering longtime opponents of the FARC accords and eroding the political capital of FARC leaders committed to peace. That increases the risk of relapsing violence that takes dangerous new forms.

War may not be imminent in Colombia. But neither, it now seems, is peace.