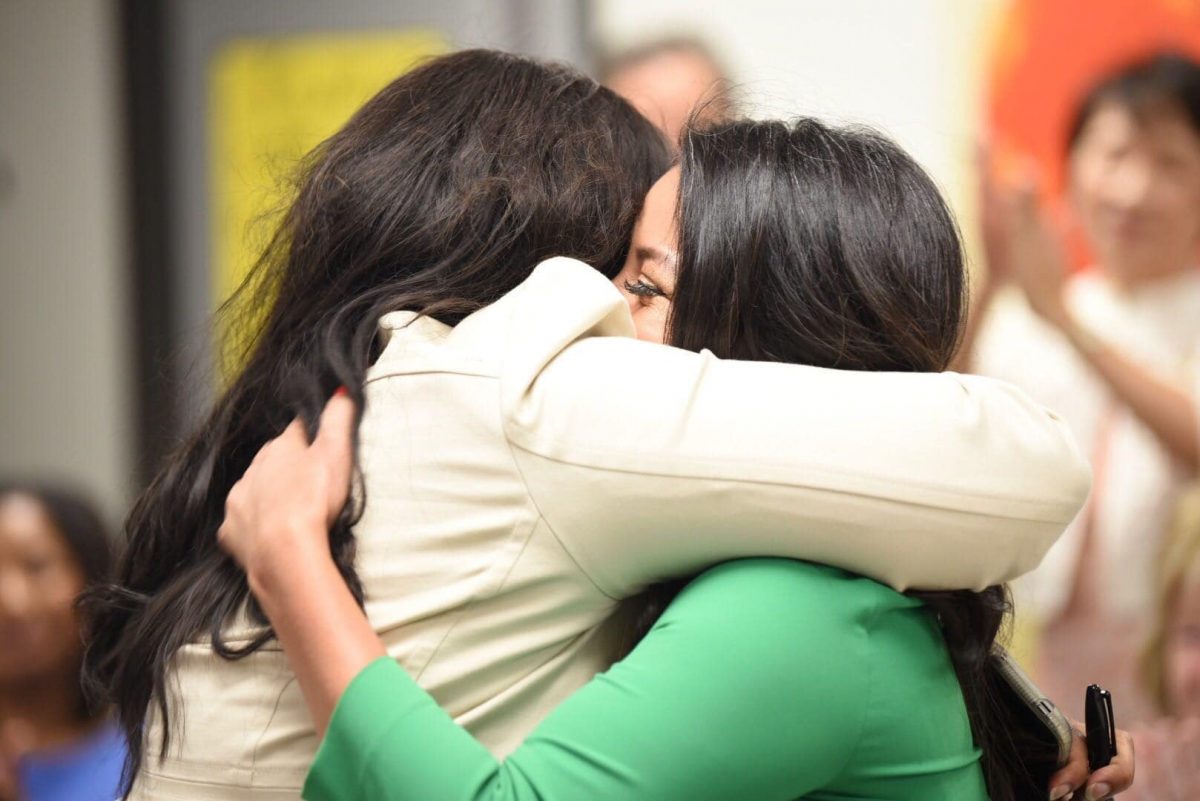 From left, sexual assault survivor and advocate Lavinia Masters and Rep. Victoria Neave (D-Dallas) in a warm embrace after the Lavinia Masters Act was signed into law earlier this week. (Photo courtesy of Rep. Neave/Facebook)

DALLAS, TX — On Tuesday June 4, history was made when Texas Governor Greg Abbott signed the Lavinia Masters Act into law. The bill, authored by Texas Representative Victoria Neave (D-Dallas), seeks to tackle the state’s backlog of sexual assault forensic exams. It is named after Lavinia Masters, a survivor whose exam sat on a shelf for over 21 years.

“I am one of 33 women out of 115 representatives in the Texas House, and I want to ensure that we focus on issues that disproportionately impact women,” Neave told Latino USA. “And this is something that victims of rape have been waiting on for far too long.”

At a time when most teenagers are concerned with emotional and physical changes wreaking havoc on their bodies, Lavinia Masters wrestled with something much darker. She was raped at knife-point by home intruders when she was 13 years old while her parents were sleeping. She took a sexual assault forensic exam, commonly referred to as a “rape kit,” intended to catch her rapist.

Unbeknownst to her at the time, the rape kit sat untouched on a shelf for more than 20 years. In the meantime, her rapist struck again and again. Masters was horrified to learn the truth after watching a TV commercial that acknowledged the Dallas Police Department had launched an initiative to clear out backlogged rape kits.

The police found her rape kit two or three months after, but then it took another five or six months to match the DNA to the rapist. By then it was 2005 and Masters learned her attacker served time in prison for other crimes. However, she could not press charges herself because the 10-year statute of limitations had passed.

“It was such a dark place. It was so lonely. It was so painful,” Masters told Latino USA. She said her faith helped her through that treacherous time in her life.

Devastated but enlightened, Masters has since dedicated her life to pursuing justice for survivors of sexual assault.

“I believe God brought me through all of this and allowed me to heal for a reason. I just knew it was a calling. There was never a second thought,” said Masters.

Masters has since become an international spokesperson for the plight of survivors and educates the masses on how to advocate for the rights of sexual assault victims. She has traveled nationally and globally to share her journey.

Her advocacy work eventually led her to cross paths with Neave, who put together a Dallas task force in April 2018 to identify issues with the way the legal system handles sexual assault and harassment.

A strong advocate for women’s rights, Neave saw in Masters the potential to be the face of the eventual Lavinia Masters Act.

When the bill was passed, it was an unprecedented moment not only because it received bipartisan support —an uncommon feat in an often polarized Texas Legislature— but because it gave survivors of sexual assault a new lease on life.

The new law, which specifically targets the issues that led to the delay in testing Masters’ rape kit, is an attempt to prevent a backlog on new rape kits. More than 18,000 rapes were reported in Texas in 2017. Only 9 percent of rapes are reported in Texas, according to SAFE Alliance. The State of Texas is investing more than $50 million to test the rape kit backlog, hire necessary staff and implement the technological infrastructure needed to avoid a backlog in the future.

It also proposes prolonging the time the Department of Public Safety holds on to a rape kit from two to five years in cases where the victim chooses not to pursue charges.

Neave credits the new law’s passing in part to the post #MeToo movement, which started as a social media hashtag and evolved into a social movement to shine a light on sexual injustices perpetrated against women in particular.

“We’ve been working very hard for the past several years to focus on issues that impact women,” she said. “I think in this era of #MeToo where women are raising their voices and uplifting the stories of women who have the courage to come forward to share their stories, legislators on both side of the aisle listened and paid attention and here in Texas came together to pass the Lavinia Masters Act.”

But Neave said the bill would not have become law without Masters’ compelling testimony.

Masters said that message was received loud and clear. Before, she said she felt trapped like the Chilean miners must have felt in 2010 as they waited to be rescued. Like them, she was elated and relieved when saved. Passage of the Lavinia Masters Act means she has now taken on the role of a rescuer.

“People need help. People are hurting. People are traumatized,” Masters said. “I pray that I can encourage other victims to see the power they have to become an advocate for others and help them get to a place where they are now.”

Helping survivors see the power they have can be challenging for women of color and women from lower socioeconomic backgrounds. This Act could help encourage them to report rape at higher rates and advocate for their own justice.

“Many times women are not believed. Many times women have concerns that if they come forward they may be retaliated against, they may lose their job and lose their income, or lose the roof over their heads,” Neave said. “This disproportionately impacts our communities of color; our Latina and African American sisters. Our message to women of all backgrounds is to please come forward. We want to ensure that you’re going to receive the justice that you deserve.”

The National Intimate Partner and Sexual Violence Survey, developed by the Centers for Disease Control and Prevention, found that 1 in 7 Latinas reported rape in their lifetime compared to 1 in 5 women of other ethnicities.

In a 2018 op-ed for Colorlines, Jessica González-Rojas, executive director of the National Latina Institute for Reproductive Health, along with executive directors from its Asian and Black organizational counterparts, wrote that while gender-based violence disproportionately affects women of color they are less likely to report crime than white women.

They said women of color face cultural and systemic barriers that may stop them from reporting their abusers.

“For instance, many immigrant women cannot speak English fluently or may fear being detained and deported if they interact with law enforcement,” the women wrote. “Other women of color worry about being disbelieved or even ostracized by their families and friends because of cultural and religious views within their communities.”

But passage of the Lavinia Masters Act could give women of color in Texas newfound confidence to report their rapes because they know the legal system will follow through with an investigation.

“I think rape is a gut-wrenching trauma. It’s one of the most personal, intimate ways of violating a woman,” Neave said. “I’m very honored that our state is leading the way to ensure that women in Texas; our sisters, our granddaughters, our friends, our girlfriends, are getting the justice that is long overdue.”

Texas sets a high bar for other states to follow and it tends to set the precedent among southern states when it comes to legislation, said Camille Cooper, Vice President of Public Policy at The Rape, Abuse & Incest National Network (RAINN).

“Texas is a big state and in a lot of ways has done some innovations that have led the way for a lot of other states, particularly southern states,” Cooper told Latino USA.

During the signing of the bill into law, Governor Abbott praised lawmakers like Neave who were involved with pushing the bill forward. He said public safety is a bipartisan priority.

“It doesn’t matter what political party, what race, what geography you come from. Everybody wants justice, everybody wants safety,” he said in The Dallas Morning News.

During the recent legislative session, Neave also filed two other bills with the goal of providing improved care for survivors of sexual abuse. They include a streamlined reimbursement process for health care facilities and sexual assault nurse examiners and a required “trauma-informed interviewing technique” to be used by law enforcement when dealing with survivors.

Masters said the law’s passage is monumental at its root because it lets survivors know the legal and justice systems are taking accountability for their prior shortcomings.

“It’s the powers that be, recognizing you’ve already been victimized and are now trying to do everything in their power to make it right,” she said.