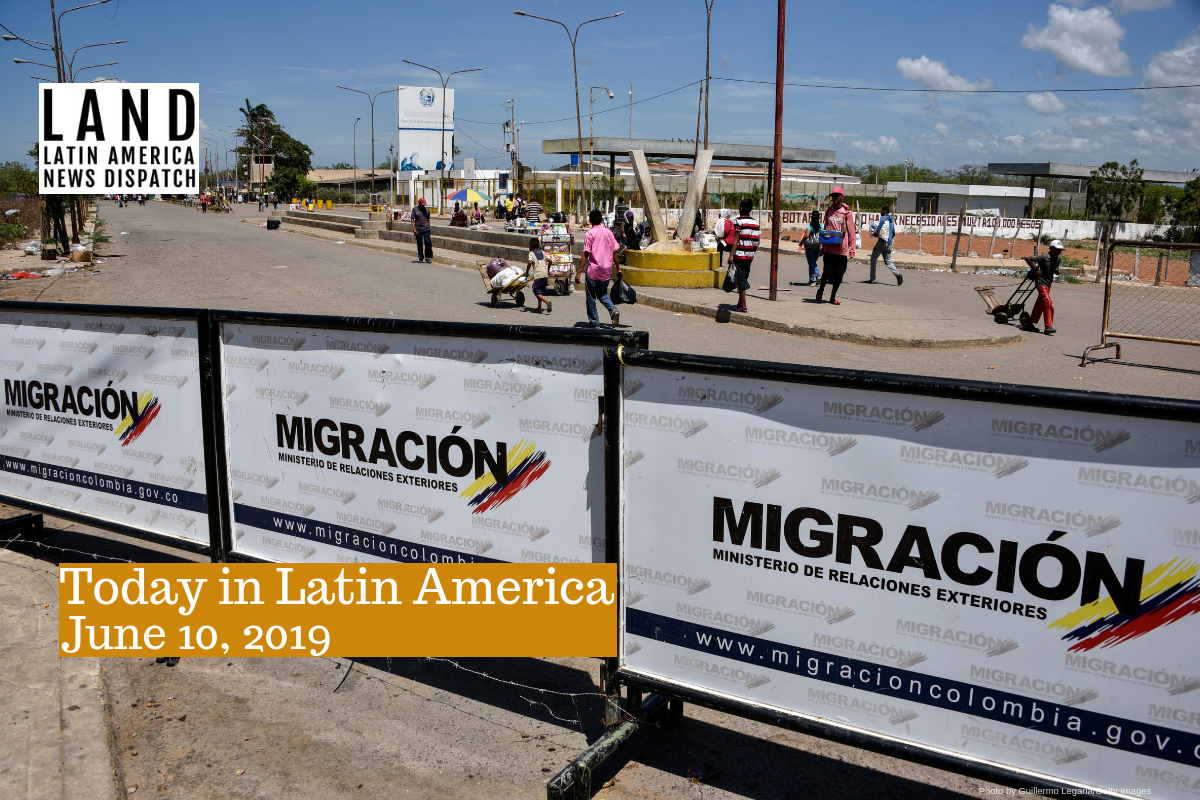 People cross the border between Colombia and Venezuela on June 09, 2019 in Paraguachon, Colombia. (Photo by Guillermo Legaria/Getty Images)

COLOMBIA/VENEZUELA: President Nicolás Maduro announced via Twitter that Venezuela was reopening its border with Colombia this Saturday, after four months of closure.

Thousands of Venezuelans reportedly crossed into Colombia over the weekend through two international bridges near the border. Maduro’s decision comes in the wake of a statement released by the United Nations High Commissioner for Refugees (UNHCR), saying that over 4 million Venezuelans had left the country. The UNHCR called the exodus “the largest in the recent history of Latin America and the Caribbean.”

REGIONAL: On Friday, after a week of negotiations with Mexico, President Donald Trump “indefinitely delayed” tariffs on all Mexican goods, allegedly going into effect today. In return, Mexico will take “unprecedented steps” to curb illegal migration. The U.S. has pledged to speed up asylum requests and expand a policy that sends back applicants to Mexico during their wait for their adjudication date.

President Andrés Manuel López Obrador said that Mexico would be sending six thousand National Guard troops to its southern border with Guatemala. The president admitted he was ready to slap retaliatory tariffs on the U.S., but that Mexico’s dignity is “intact” after both nations reached an accord. Trump said he was confident that Mexico would enforce the new migratory protocols that attempt to stem the influx of Central American asylum-seekers into the United States. On Saturday, officials from both countries admitted that the actions to avoid tariffs were taken “months ago.”

MEXICO: The construction of a new airport near the capital has been suspended indefinitely by a federal judge until the government sorts environmental contracts. Santa Lucía is one of the airports that President Andrés Manuel López Obrador plans to provide to Mexico City, replacing the New Texcoco International Airport project, which was canceled in January. The suspension comes after 147 lawsuits were presented by the #NoMasDerroches (‘#NoMoreSplurges’) collective, made up of different civil society groups.

HAITI: Anti-corruption demonstrators took the streets of Port-au-Prince yesterday, blocking roads and demanding the removal of President Jovenel Moïse from office. Using the motto of “What happened to the PetroCaribe Money?”, the PetroChallengers, a grassroots group that was organizing the march, condemned President Moïse’s “predatory government” of grossly misusing state resources. One death was reported following the demonstrations.

DOMINICAN REPUBLIC: Baseball legend David Ortiz was the victim of a gun attack last night at a nightclub in Santo Domingo. The 43-year-old former Boston Red Sox player underwent surgery and remains hospitalized, as local journalists suggested the bullet perforated his abdomen. Video surveillance from the bar shows how the three-time World Series winner was shot from behind. Dominican police arrested the alleged gunman.

NICARAGUA: The Nicaraguan legislature approved a controversial amnesty bill on Saturday. Congress held an emergency session on Saturday to pass the motion by a 75 to 10 vote. Although the law would free all political prisoners that were imprisoned during last year’s demonstrations for protesting against Daniel Ortega’s regime, the opposition has condemned the amnesty proposal. The Civic Alliance, which agglomerates several civil sectors in Nicaragua, said that the bill “leaves crimes against humanity in impunity.” The United Nations and other human rights organizations have criticized the Nicaragua regime, saying they were violently repressing civilians during the 2018 protests.

GUYANA: The Guyanese government received $80 million in aid from Norway to develop several mega solar farms. The new energy projects are expected to deliver at least 30 megawatts of power, according to Guyanese officials. This comes in an effort to reduce for Guyana reliance on fossil fuels as deep water oil discoveries keep growing. The nation is expected to begin exploiting its “unprecedented” oil fields in 2020, with outputs forecasted at 120,000 barrels a day.

BRAZIL: Mining company Vale S.A. agreed to decommission nine tail dams at risk of bursting throughout the country. Vale, the largest iron ore miner in the world, decided to invest a total of $1.9 billion in the deactivation of these dams, with a $150-$200 million expenditure expected this year. The Brumadinho Dam collapse, which claimed 217 lives on Jan. 25, prompted a series of federal investigations after prosecutors said Vale was aware of the risks of bursting. The mining company projected a R$19 billion ($4.8 billion) in losses related to the Brumadinho disaster in the first quarter of this year.

CHILE: Known as one of the most predictable in the continent, the Chilean Central Bank unexpectedly cut interest rates from 3 percent to 2.5 percent in an effort to increase economic growth. Experts were keen to point out that the cut represents how the world’s top copper producer is growing concerned with the impacts of a U.S.-China trade dispute. This is the most significant interest rate cut in the austral country since June 2009, when the global financial crisis was happening.