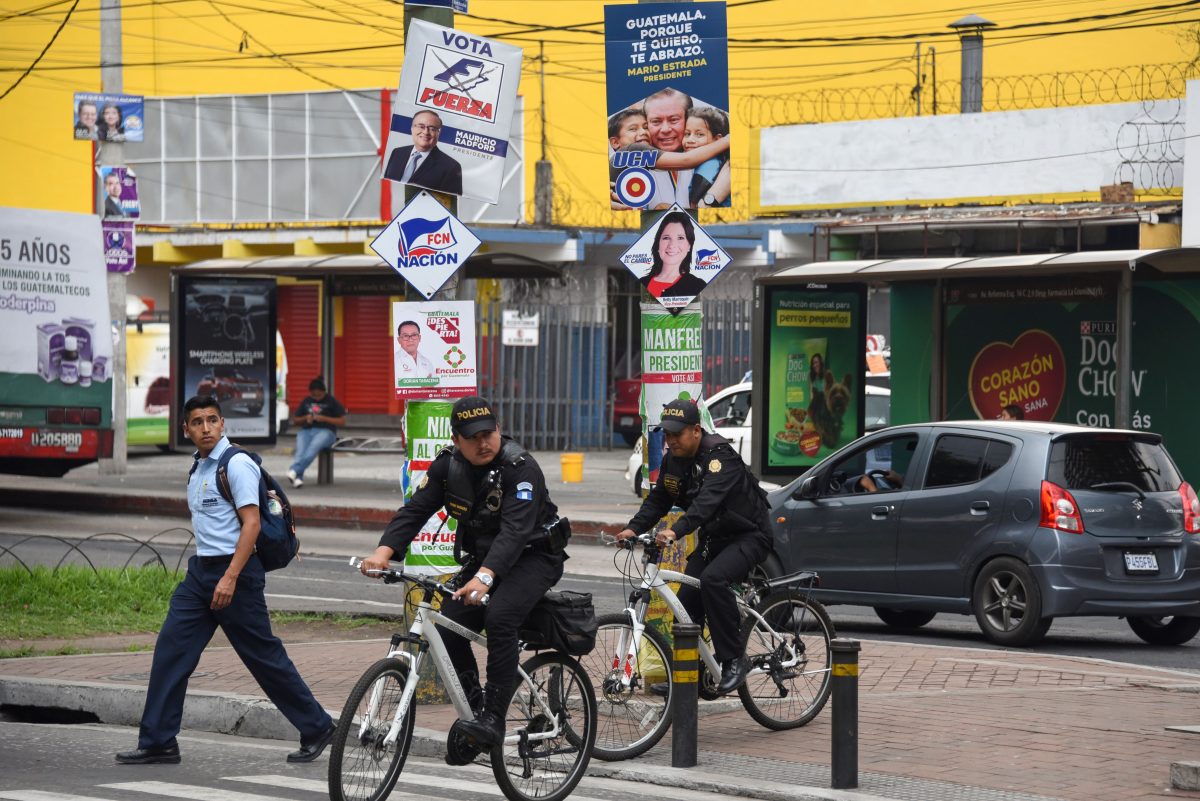 View of political ads in Guatemala City on May 21,2019. (Photo by Johan Ordonez/AFP/Getty Images)

Uncertainty hangs over the upcoming election in Guatemala. On June 16, the country will go to the polls to elect a successor to former comedian Jimmy Morales, who rode a wave of anti-corruption protests to office as an outsider candidate in 2015. They will also elect some 158 congressional representatives, 338 mayors, and 20 parliamentary members for the Central American Parliament. The process has been marred by lawsuits and violence, including the assassination of a left-wing mayoral candidate, part of a string of attacks against Indigenous and rural organizations in the country.

The elections stand against a backdrop of a growing constitutional crisis as the ongoing struggle between the president and the UN-backed anti-corruption body, the International Commission Against Impunity in Guatemala (CICIG) continues. With major presidential candidates like former Attorney General Thelma Aldana and Zury Ríos —the daughter of dictator Efraín Ríos Montt— barred from running, Sandra Torres, a center-right candidate who faced Morales in 2015 in the second round, is widely seen as the frontrunner. If no candidates win a majority in the first round, the elections will go into a second round on August 11, 2019.

At the beginning of the campaign, which officially began on March 18, 2019, 26 political parties announced they would present presidential candidates. But according to the Guatemalan daily newspaper, Prensa Libre, at least 150 candidates for Congress alone face accusations or injunctions, some of which could bar certain contenders from running.

“There are hundreds and hundreds of questionable candidates,” Renzo Rosal, a Guatemalan political analyst and columnist, said. “There are candidates with accusations of different legal cases, investigations against them for human rights violations, accused of violence against women, dark military forces, narco-candidates, etc. They have coopted many parties.”

For example, on April 17, Mario Estrada, the presidential candidate for the Unión de Cambio Nacional (National Change Union, UCN) party was arrested on accusations of conspiring to collaborate with the Mexican Sinaloa drug cartel to import cocaine to the United States and to assassinate political rivals. The charges came after Estrada was caught on tape requesting funding from the cartel and requesting the assassination of rivals in exchange for allowing the cartel to cross the country in a U.S. Drug Enforcement Administration-funded operation. He was extradited to the United States where he faces felony charges. Congressional candidate Julio José Rosales Morales and Ayulta mayor Erick Salvador Súñiga Rodríguez are both facing extradition charges for crimes related to drug trafficking.

The election is occurring in a period of crisis and change. In 2016, the Guatemalan Congress passed a series of reforms in the wake of a corruption scandal unearthed by the CICIG and the Guatemalan Public Prosecutor’s office, which led to the resignation and prosecution of former president Otto Pérez Molina. The 2016 reforms to the political parties and electoral laws shortened the campaign period, placed more oversight on campaign financing, and limited the ability of candidates to switch parties upon gaining office, and prohibited the practice of gift giving in exchange for votes.

The stated goal of these reforms was to improve confidence in the electoral process by eliminating illicit influences from organized crime, drug traffickers, and private businesses from the elections. Another reform that did not end up being implemented was a ban on candidates who switched parties in the middle of their terms. Switching parties, which Plaza Pública described as “a practice adverse to democracy,” is common in Guatemala. Yet the Supreme Electoral Council accepted the candidacies of many congressional representatives that switched parties prior to the 2019 election.

According to Claudia Samayoa, the founder of the Human-rights organization Unidad de Protección a Defensoras y Defensores de Derechos Humanos en Guatemala (UDEFEGUA), efforts to improve the electoral system remain incomplete and unclear. “The result is that no one really knows anything,” she said. “They do not know the proposals, they do not know their candidates since there is no clarity still. This means that populations are lacking information.”

According to the Central American Institute for Fiscal Studies (ICEFI), as of June 3, only 13 of the 19 political parties with presidential candidates have presented their governance plans to the public. While candidate proposals vary widely, candidates have focused on addressing insecurity, corruption, and infrastructure, as well as controversial topics such as abortion, which 15 candidates, including frontrunner Sandra Torres, signed a conservative agreement to protect “the traditional family and life.” Left-wing candidates for Covergencia, Winaq, Movimiento de la Liberación de los Pueblos (Peoples’ Liberation Movement, MLP), and the Unidad Revolucionaria Nacional Guatemalteca (Guatemalan National Revolutionary Unity, URNG) did not sign the agreement; rather these candidates have continued to propose development and fully complying with the 1996 Peace Accords.

Several frontrunners have been barred from running in the election, throwing the potential election results into chaos. Just 12 days before Guatemalans go to the polls, the country’s Constitutional Court ruled that Edwin Escobar, the presidential candidate for the Citizen Prosperity party was ineligible to run. The ban followed the May 13 ruling that Zury Ríos Sosa, presidential candidate for the Valor Party and daughter of former dictator Efraín Ríos Montt, would not be allowed to run for office because her candidacy violates Article 183 of the Constitution, which bars those who achieved power through a coup d’état and their family members from running for president. The court also ruled that Mauricio Radford, a minor presidential candidate for the Fuerza Party, was ineligible.

And on May 15, the court ruled against the eligibility of Thelma Aldana, running with the Semilla (Seed) Party. Aldana gained notoriety and acclaim for overseeing the investigation into corruption within the administration of Otto Pérez Moina. The court ruled six to one that she was ineligible to run due to the failure to meet prerequisites for office due to the revocation of documentation required to run as a result of a pending investigation into accusation against her by right-wing members of Congress for the purchase of a building in Guatemala City during her time as Attorney General.

In addition, the presidential candidate for the ruling FCN-Nación party, Estuardo Galdámez, faces accusations of corruption in a bribery scandal, along with six other congressional representatives and the current Finance Minister. The accusations follow an investigation by the Public Prosecutor’s Office and the CICIG, which continues its investigations in spite of Morales’ decision to expel it, but Galdámez has not been removed from the ballot. Both Estrada and Galdámez have denied the accusations.

Torres has also faced challenges for alleged illegal campaign financing in her 2015 bid for president, but the Constitutional Court chose to return the case to the Supreme Court, leaving the results in limbo. Torres has also faced widespread criticism due to accusations of corruption and misusing femicide laws to derail investigations into campaign corruption and to silence criticism from the national media.

A State of Unrest

Adding to the general atmosphere of uncertainty and doubts surrounding the electoral process and its candidates, some running for office have faced threats and violence. The Guatemalan Supreme Electoral Council issued a warning on May 24 on the risk of conflict during the electoral process. Officials identified 41 at-risk municipalities that it recommended take particular caution.

According to a report by Mirador Electoral, an NGO that monitors elections in Guatemala, observers documented 12 cases of intimidation or threats since the campaign began on March 18 to mid-April. There have been at least five murders of candidates, party members, and election officials since the report was issued, including two candidates for the left-wing MLP. Prior to the beginning of the campaign, there were at least five murders of potential candidates or registered candidates associated with the political parties MLP and Fuerza between May 2018 and March 2019.

Such acts of violence and intimidation are not new in Guatemala. In 2015, Mirador Electoral identified 20 deaths of candidates for mayoral and municipal seats, party members, or voters between March to October 2015, which were attributed to the election.

The assassination of MLP candidates is especially concerning because the left-wing party was formed in 2018 as the political arm of the Comité de Desarrollo Campesino, (Campesino Development Committee, CODECA), an organization that represents the concerns of rural campesinos in 20 of Guatemala’s 22 departments. CODECA has long been a thorn in the side of the Guatemalan government because of their protests against corruption and demands to form a plurinational and to nationalize electricity.

The economic and political elite has aimed to delegitimize the party through spreading misinformation about their various actions and protests. In 2012, former president Pérez Molina referred to the organization as a “social cancer” for the movement’s struggle against high energy costs. In 2014, the Public Prosecutor’s office filed charges against three leaders, but all were cleared of wrongdoing.

The assassination of Luis Marroquín, an organizer with CODECA and a potential candidate for mayor of San Pedro Pinula, occurred the very same day that the party registered with the TSE on May 9. Marroquín was the first killed in a campaign of violence against campesino organizations.

Samayoa suggests that the attacks on campesino leaders that began in May 2018, when voter registration began, are intended to undermine confidence in the election and discourage the population from voting for candidates on the Left. “All this violence is occurring in order to scare the people so they do not vote, or so they vote for the right-wing candidates of the criminal alliance,” Samayoa said. “They are trying to guarantee that the Left does not receive any more representation in congress.”

Beyond the candidates themselves, election season has come alongside other kinds of unrest throughout Guatemala. On May 20, for example, a group of former paramilitaries who had fought during the country’s civil war blocked highways to demand pensions and other benefits for former militants. They threatened to use bombs and weapons to undermine the elections if their demands aren’t met—or at the very least, boycott.

Meanwhile, the administration of Jimmy Morales has also shown contempt for the electoral process. In April, he openly met with certain presidential candidates, including Torres, Estrada, and other candidates, an act that is prohibited for sitting presidents.

“We have never had a president who has met with candidates,” Samayoa said. “The law obliges the independence of powers. This includes independence in the electoral process.”

The election is occurring in the wake of the constitutional crisis manufactured by President Morales after he unilaterally declared that he would not be renewing the contract of the UN-backed anti-graft body, CICIG, last summer. Morales then stepped up his attacks on anti-corruption efforts by barring the lead CICIG investigator, Colombian lawyer Ivan Velásquez, from the country, and then declared in January 2019 that the anti-corruption body would be expelled from Guatemala.

Morales and his family were subjects of investigations into illicit financing of the 2015 campaign, and acts of corruption in his administration. While Morales has essentially eliminated and derailed future investigations into corruption and illicit association, the CICIG has continued to work with the Public Prosecutor’s office in their investigations until their mandate is terminated in September 2019.

The threats posed by the election cut to a deeper issue within Guatemalan society. “There are regressive forces trying to retake power,” Rosal, the Guatemalan political analyst, said. “The struggle against corruption hit these structures of power, which have now strengthened again.”

Their actions can be seen as none other than a revanchist elite takeover of forces that might be able to curb their power. “We are seeing a reconfiguration of the far-right groups which is trying to limit civil rights, leave aside the human rights agenda, and that will permit the expansion again of corruption,” Rosal said.