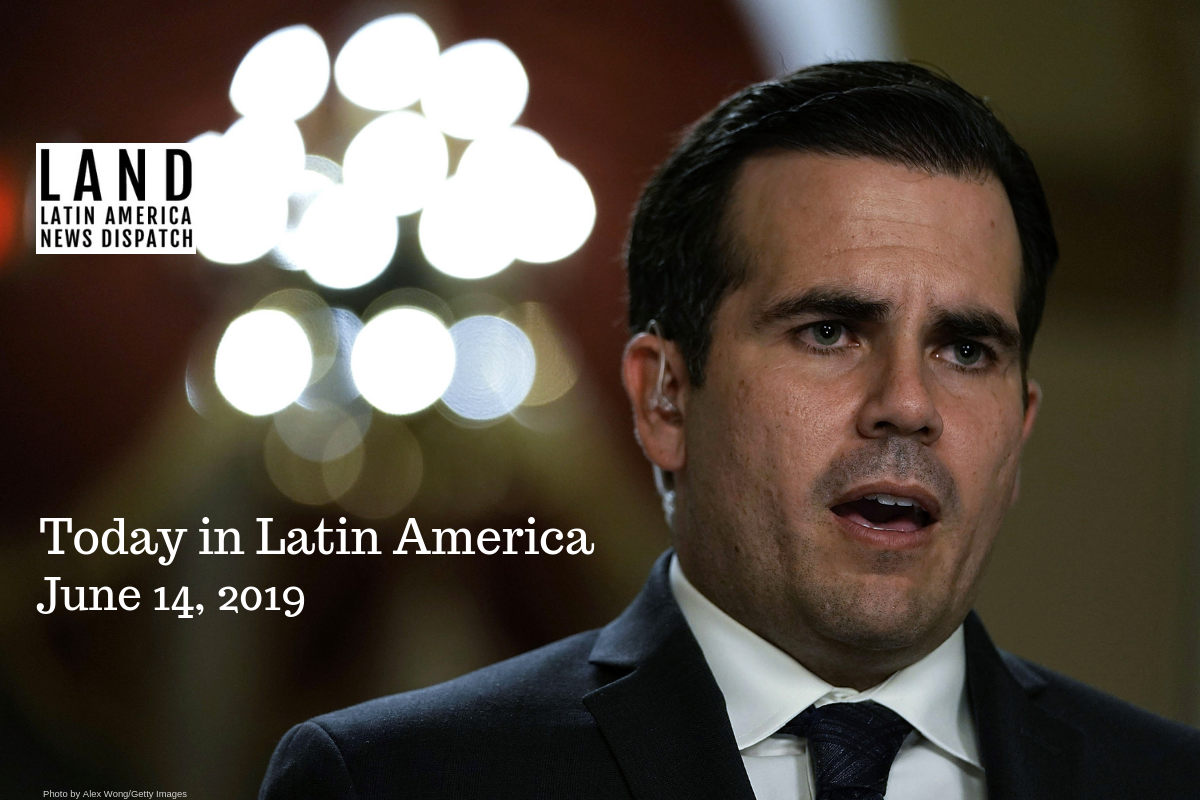 PUERTO RICO: Yesterday, Governor Ricardo Rosselló decided to remove consideration for a  bill that would have allegedly allowed for discrimination against sexual orientation and gender identity under the guise of “protecting” religious freedom. On Tuesday, the House of Representatives on the island passed the Religious Freedom bill, which allows government officials to refuse service to constituents if they believe it clashes with their religious beliefs. Government officials have denied the law is discriminatory, which Rosselló initially supported.

The Religious Freedom bill has sparked widespread condemnation. Over 40 human rights and civil society organizations denounced the passing of the bill at the end of April. Hours before Governor Rosselló backtracked, Puerto Rican singer Ricky Martin, who published an open letter yesterday criticizing the measure, labeling the motion as a “hate bill” that projects Puerto Rico “as a backward country” to the world. Three Democratic presidential candidates —Senator Elizabeth Warren (D-MA), Senator Bernie Sanders (D-MA), and Julián Castro— have also spoken against the controversial bill.

U.S.-MEXICO BORDER: On Wednesday morning, Border Patrol agents found the body of a 7-year-old girl believed to be from India near the U.S.-Mexico border in Arizona. A press release published yesterday by U.S. Customs and Border Protection (CBP) said the remains were recovered near Lukeville, a town 150 miles southwest of Tucson. CBP apprehended two women from India, who told them they had been separated from another woman and two children earlier that day. Agents searched the terrain near the border, finding the girl’s remains. Helicopters were sent to look for the two missing migrants and found footprints that indicate they crossed back to Mexico, according to the CBP press release.

MEXICO: The National Sound Library of Mexico unearthed an audio recording thought to be the voice of Frida Kahlo. Taken for the pilot episode for the radio show “El Bachiller” (“The Bachelor”), the recording features Kahlo reading a profile of his husband, muralist Diego Rivera, whose voice can also be heard during the clip. Estimated to have been taken in 1953 or 1954, the audio is the first known recording of Kahlo’s voice.

REGION: A U.S. medical ship sails today from Norfolk, Virginia in a five-month trip throughout the Caribbean basin. The U.S. Navy hospital ship Comfort will make stops in the Dominican Republic, Grenada, Haiti, Jamaica, Saint Lucia, St. Kitts and Nevis, and Trinidad and Tobago, providing six clinical days in each nation. The $34 million operation includes over 200 military medical professionals and a hundred health practitioners from nongovernmental groups, including dentists and optometrists. The Comfort, which went on a relief mission to Puerto Rico after Hurricane María in 2017, will also dock in Colombia, Costa Rica, Ecuador, Panama.

HAITI: President Jovenel Moïse finally addressed the nation yesterday, saying he would not step down from his position. The embattled president defended his record, saying he is not corrupt, and called for calm in Haiti. Yesterday, demonstrators attempted to storm the Presidential Palace in Port-au-Prince, prompting more clashes with police. Another protest is scheduled for today.

GUATEMALA: The general election takes place this Sunday, with half the electorate uncertain of their vote. Out of a candidate field with over 20 options, former first lady Sandra Torres leads the presidential poll with 22 percent of the vote share, followed by Alejandro Giammattei, polling at 14.4 percent and running for office for the fourth time. Four years after uprisings toppled former president Otto Pérez Molina, Guatemalans still grapple with pervasive corruption and rampant violence, which has resulted in 470,000 migrants apprehended at the border since incumbent president Jimmy Morales assumed office. If no candidate reaches over 51 percent of the vote share on the first round, the top two will face off on August 11.

PANAMA: With an ongoing trade dispute between Washington and Beijing, Japan has overtaken China as the second-biggest user of the Panama Canal. The Canal’s administrator, Jorge Quijano, said that the increase is due to more “liquefied petroleum, gas and liquefied natural gas from the United States to Japan,” combined with a “substantial reduction” in sales of these petroleum products from the U.S. to China. The U.S. still accounts for over 60 percent of the maritime traffic that uses the inter-oceanic route.

VENEZUELA: Sweden is hosting representatives from the United Nations, the European Union, Russia, the Vatican, and Cuba to discuss the Venezuelan crisis. A European diplomat said that the talks in Sweden are “for backing the dialogue in Norway,” which produced no outcome after they ended on May 30. The talks, allegedly being held in private, will intentionally keep president Nicolás Maduro and opposition leader Juan Guaidó outside of the multilateral meeting.

CHILE: President Sebastián Piñera announced six changes to his cabinet yesterday to renew confidence in his administration. Piñera sacked the ministers of Foreign Affairs, Health, Economy, Public Works, Social Development, and Energy in an effort to kickstart the economy. A slump in mining and manufacturing, coupled with global trade tensions, has hindered the growth of the Chilean economy. The center-right Piñera currently holds an approval rating of 25 percent.

REGION: The 46th edition of the Copa América begins today in Brazil when the hosts face off against Bolivia in São Paulo. The oldest tournament in international football gathers all ten teams from the South American football federation (CONMEBOL) with guest teams Japan and Qatar also participating this year. Brazil has won every Copa they have ever staged, but with a 12-year trophy drought, the performance bar for this year is set at nothing less than victory. Kick-off will be overshadowed by Neymar’s rape allegations. Najila Trinidade, a 26-year-old model, is accusing the captain of the Brazilian national team of forcing himself onto her at a Paris hotel room in May, which the footballer vehemently denies.