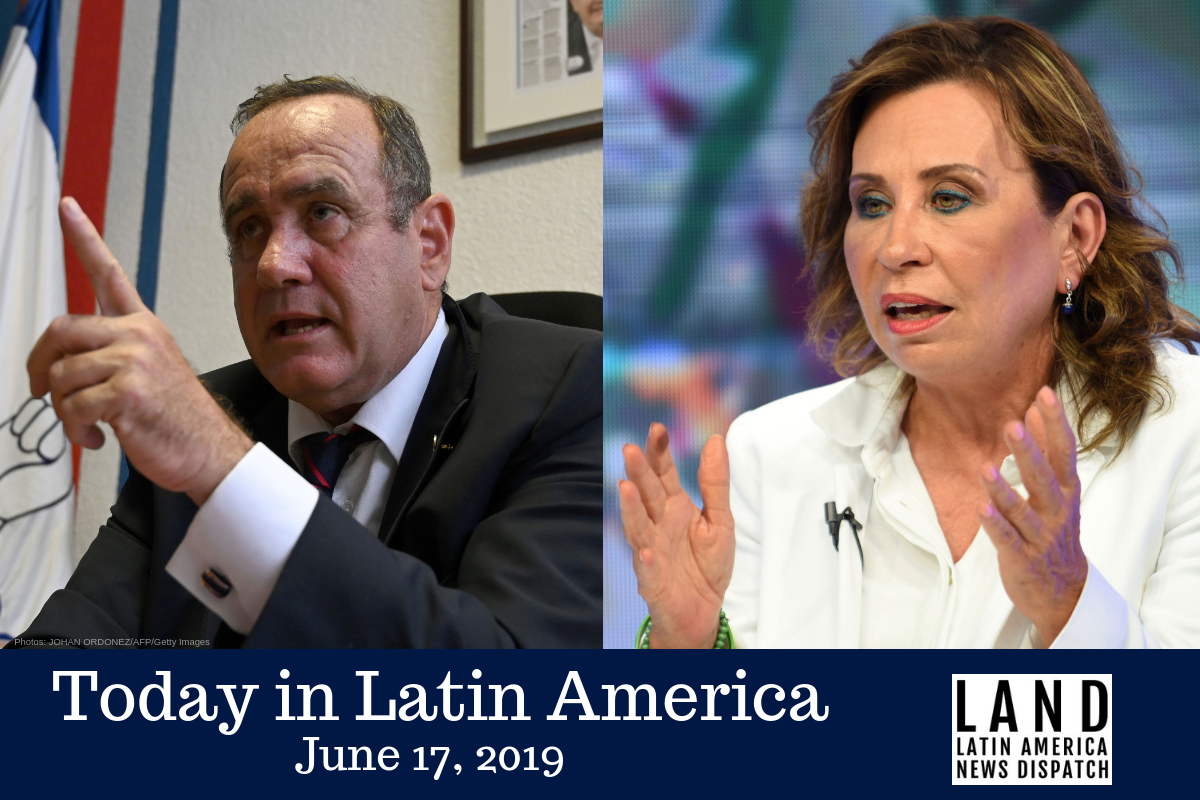 GUATEMALA: Marked by allegations of corruption and political uncertainty, the country’s general election took place yesterday. Among a crowded field of 19 presidential candidates and following the barring of several contenders, Sandra Torres and the National Unity of Hope (UNE) party accrued 24.35 percent of the total vote. Torres, who is running on her third time, is best known for serving as the first lady during the administration of her then-husband Álvaro Colom between 2008 and 2012. Alejandro Giammattei, a former prison director running with the Vamos party, polled second at 14.46 percent. Given that no candidate secured the majority vote yesterday and with 80% of tables counted, the run-off between Torres and Giammattei will take place on August 11.

U.S.-MEXICO BORDER: Yesterday, large crowds gathered in front of the nation’s largest detention facility for unaccompanied migrant minors in Homestead, Florida, to demand its closure. In a demonstration coordinated by immigrant advocacy groups and religious organizations, protesters sang Civil Rights-era songs and called the detention of underage children “a moral outrage.” Advocates have filed court papers with “prison-like” descriptions of the facility, which allegedly holds over 3,200 unaccompanied minors.

MEXICO: As the National Guard began to patrol the southern border with Guatemala over the weekend, Mexico detained 741 migrants on Saturday, one of the largest apprehensions in recent months. Federal agents arrested the foreign nationals as they traveled in the eastern state of Veracruz in four trucks. Authorities reported 381 children under the age of eight were included in the mass detention. On Friday, the Director of Mexico’s National Immigration Institute resigned amid the increasing crackdown on immigrants from Central America. Tonatiuh Guillén did not present a reason for his departure.

CUBA: Expedia Group, the online booking agency and digital travel conglomerate, agreed to pay over $325,000 to the U.S. government after violating travel restrictions to Cuba. A memo released by the Treasury Department said that Expedia assisted 2,221 persons with Cuba-related travel services between 2011 and 2014. The sales breached the Cuban Assets Control Regulations, introduced in 1963 and eased until the Obama administration brokered a diplomatic breakthrough in Dec. 2014.

JAMAICA: The ad-hoc board of Venezuelan state-owned oil giant PDVSA, appointed by opposition leader by Juan Guaidó, has asked the government of Jamaica not to expropriate the company’s shares in the island. The formal request sent on Saturday attempts to stop the sale of the shares, warning that Jamaica “cannot maintain any arrangements” made with President Nicolás Maduro. In February, the Jamaican Senate approved legislation to unilaterally retake ownership of 49 percent of Petrojam, Jamaica’s state refinery acquired by Venezuela in 2006 as part of late president Hugo Chávez’s foreign policy in the Caribbean.

PERU: A record number of Venezuelan migrants entered Peru over the weekend as the country prepares to tighten its border. The United Nations refugee office (UNHCR) announced that around 8,000 Venezuelans crossed the Ecuadorean-Peruvian border in Tumbes, with almost 4,700 of them requesting asylum. Both statistics were single-day records, according to the UNHCR. New migratory rules imposed on Perú on Saturday stipulate that Venezuelan migrants attempting to enter the country must have valid passports and visas, negating access to many Venezuelans who cannot afford the costs.

ECUADOR: The Ecuadorean government has allowed the U.S. military to use the Galápagos Islands as an airfield for future drug enforcement operations in the region. The volcanic archipelago, which lies about 1,000 km (621 mi) off the country’s coast, will now be accessible to intelligence-gathering airplanes after President Lenín Moreno signed a controversial ‘cooperation’ agreement that detractors have labeled “unconstitutional.”

Former president Rafael Correa has also harshly criticized the decision, saying that the archipelago is “not an ‘aircraft carrier’ for gringo use.”

ARGENTINA/URUGUAY: Massive blackouts hit large parts of Argentina and Uruguay yesterday. Around 50 million people were left without electricity after a power grid that serves both countries experienced a technical failure. Argentinean President Mauricio Macri called the blackout an “unprecedented event” and announced that further investigations would be launched into the causes of the total disconnection.

On late Sunday, utility companies in Argentina and Uruguay said that 98 percent and 88 percent of the power loss had been restored, respectively. The outage also affected parts of Paraguay, Chile, and Brazil.

PARAGUAY: Marihuana seeds were distributed at no cost by a local nonprofit on Saturday. ‘Mama Cultiva,’ the Asunción-based organization, gave away around 500 growing kits to mothers of chronically-ill patients so that cannabidiol (CBD) oil, said to alleviate pain and relieve anxiety, can be produced at home. The event, which took place at a public square in the Paraguayan capital, seeks to pressure the government of President Mario Abdo Benítez to authorize the home cultivation of the plant. Former President Horacio Cartés created a legal framework to legalize cannabis production and use, but its ratification on the legislature has been delayed since 2018.