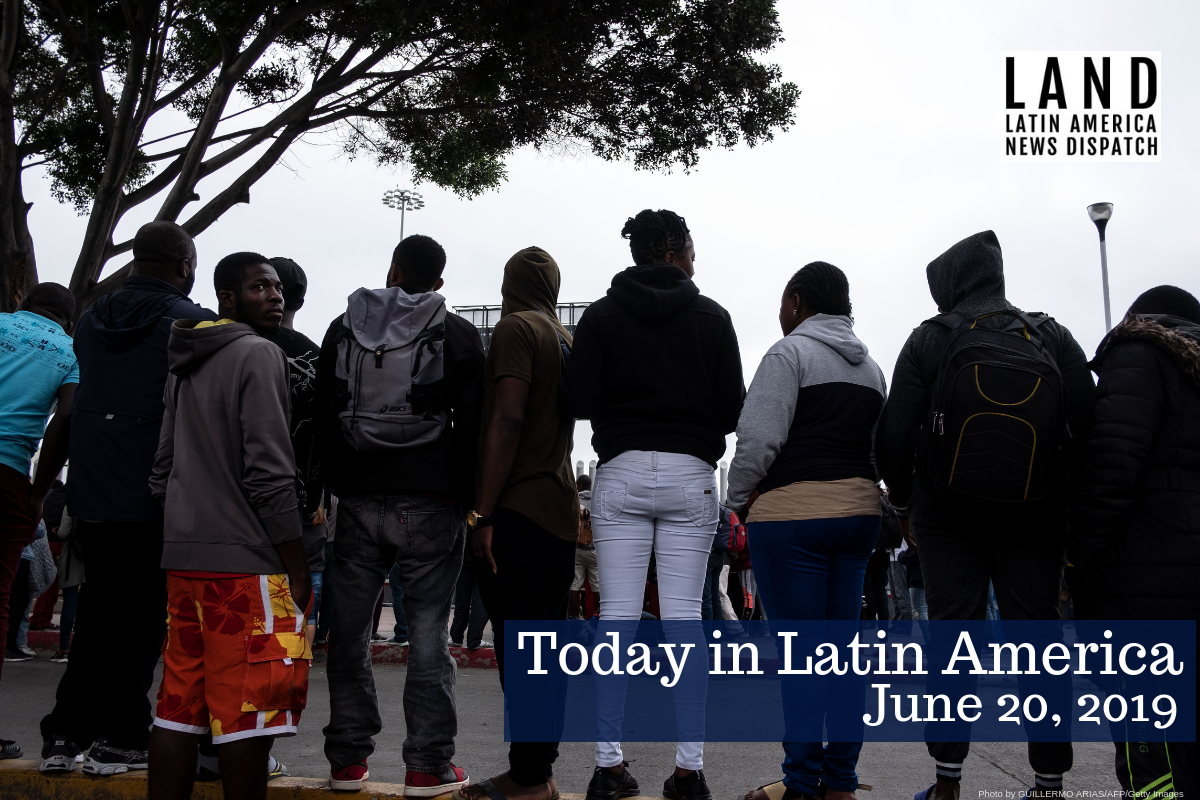 REGION: The United Nations High Commissioner for Refugees (UNHCR) released its annual “Global Trends” report yesterday, saying that 70.8 million people have been displaced around the globe by violence in their home countries. The number for this year increased by 2 million people, in comparison to 2017, and represents a 65 percent increment from a decade ago. The UNHCR statistics also show that one in every five asylum claims around the world is filed by Venezuelan nationals, representing the most significant group worldwide. The report was released on the occasion of World Refugee Day, observed today.

MEXICO: Yesterday, the Senate ratified the United States-Mexico-Canada (USMCA) trade agreement, becoming the first of the three countries to approve the new commercial trading bloc. The favorable result in the legislature, a 114-4 vote, comes three weeks after President Andrés Manuel López Obrador submitted the documents necessary for revising the USMCA to Mexican lawmakers. Colloquially known as the “new NAFTA”, the USMCA replaces the 25-year-old North American Free Trade Agreement, with new changes in place for the automaker and dairy industry, among others.

CUBA: An advocacy group released a 259-page report yesterday saying that the Cuban state security forces are pressuring Cuban dissidents to go into exile. The Madrid-based Cuban Prisoners Defenders (CPD) said that 35 activists have been “forcefully expatriated” over the past two years. CPD also identified 42 other people who claim to be “currently under pressure” to leave the island.

PUERTO RICO: During an interview with Fox News last week, Senate majority leader Mitch McConnell (R-Kentucky) called Democratic Party support for Puerto Rican statehood “full-bore socialism.” On Monday, Democratic presidential candidate Bernie Sanders (D-Vermont) slammed McConnell over his comments via Twitter, saying that if support for independence and sovereignty for Puerto Rico and the District of Columbia is considered “socialist,” then it is “another reason why he [Sanders] is a proud Democratic Socialist.” Earlier this year, lawmakers introduced a bipartisan bill proposing statehood for the island, which would remedy “120 years of colonialism” according to Puerto Rican officials.

GUATEMALA: A European-owned mine in Guatemala paid only £1.4 million ($1.7 million) in mandatory taxes over 15 years of operation. A recent investigation by The Guardian has found that Swiss-Russian mining company Solway, which owns the Fenix opencast mine located in the northeastern department of Izabal, has benefited from Guatemala’s low 1 percent nickel royalty rate. Maya Q’eqchi residents living close to the mine have lengthily protested against the mine’s operations, violently clashing with security forces several times.

HONDURAS: Today, embattled President Juan Orlando Hernández has invited educators and health workers for a dialogue to resolve their disputes. Representatives from both sectors remain skeptical about the government’s intentions, saying the roundtables “are false intentions.” Honduran teachers and physicians began a series of strikes last April to oppose two decrees approved by the legislature that allegedly sought to privatize the country’s health and education services. The bills were eliminated last week, but demonstrators still refuse to meet with Hernández’ administration.

COLOMBIA: President Iván Duque has requested authorities to “step up” protection for former armed combatants, following the recent killings of two FARC members. On Monday, two gunmen on a motorcycle killed former rebel Anderson Pérez Osorio in Cauca, southwest Colombia. The FARC claims that at least 140 guerrillas have been assassinated in the country since the Peace Accords were signed in Nov. 2016.

Duque, who has criticized the peace deal on multiple occasions, tweeted yesterday that he has instructed prosecutors to launch a probe into the murders.

ARGENTINA: The unemployment rate reached its highest point since 2006. The percentage of unemployed workers in the first quarter of 2019 stands at 10.1 percent, a two-point increase from last year. Moreover, the second-largest economy in South America contracted 5.8 percent versus the same period in 2018. The International Monetary Fund (IMF) ranks Argentina among the twenty countries with the worst unemployment rate, well above the regional average of 7.8 percent.

BRAZIL: Yesterday, Minister of Justice Sérgio Moro spoke at the Senate regarding allegations that he and other Brazilian judges purposely prevented Luiz Inácio Lula da Silva and the Partido dos Trabalhadores (PT) from winning the 2018 election. After a 9-hour hearing, Moro said that the media was “sensationalizing” the text messages uncovered by The Intercept. Moro admitted that there is a possibility of leaving the post under the government of Jair Bolsonaro, who called Moro a “national treasure” yesterday, if more irregularities are pointed out against his judicial conduct.