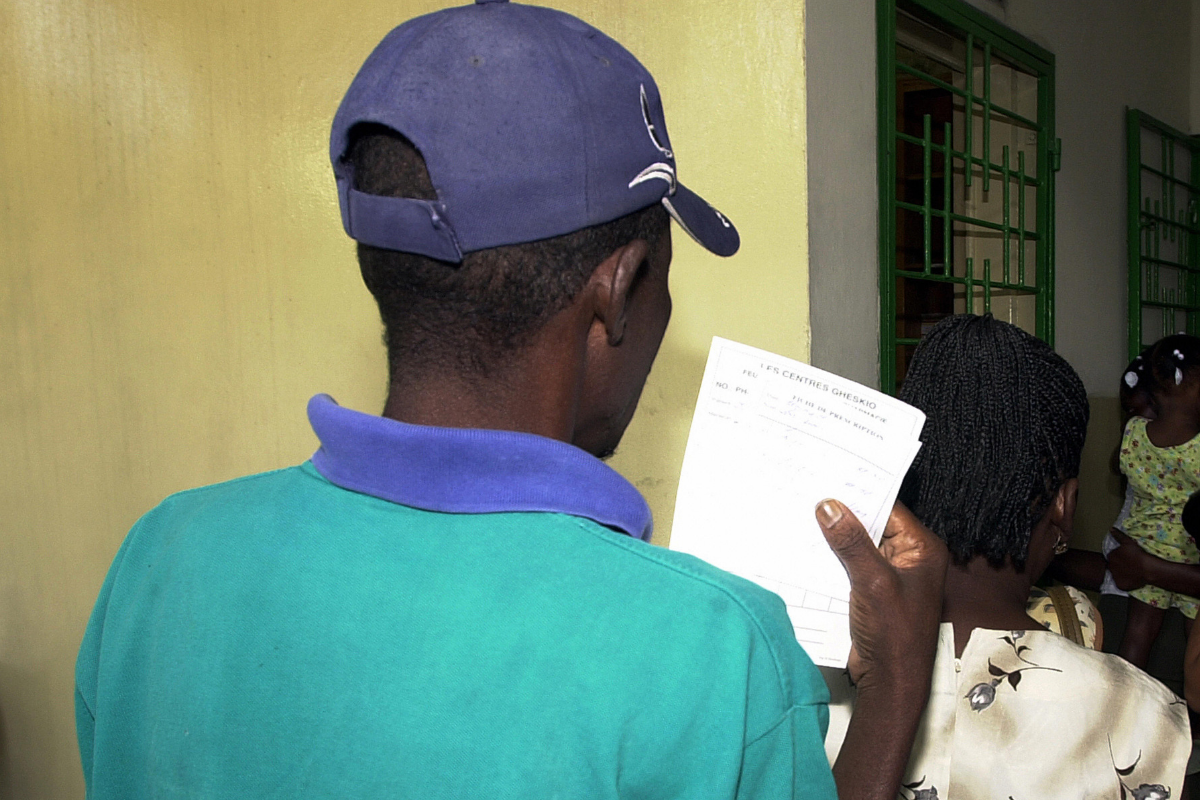 A patient of the HIV/AIDS health clinic Geskio Center in Pot-au-Prince. (Photo by Thony Belizaire/AFP/Getty Images)

In Haiti, about 150,000 people out of a population of 11 million are believed to be living with the HIV virus. Of those, only 55 percent have access to antiretroviral medications. What explains this lack of access to care?

Despite many public health interventions in the region, people in Haiti that are infected with HIV are vulnerable to stigmatization, particularly sexual minorities. The latter suffer considerable ostracism, which prevents access to care.

A Difficult Commitment In The Fight Against HIV

The poorest country in the Western hemisphere, Haiti has the highest number of people living with HIV in the Caribbean, the second most affected region in the world outside of Africa in terms of prevalence.

Despite political unrest, socio-economic difficulties and ongoing natural disasters, Haiti remains committed to the fight against the HIV epidemic.

The prevention and treatment strategies implemented by the government in collaboration with non-governmental organizations and international donors have contributed to reducing the national HIV prevalence from 6.2 percent in 1993 to 2.2 percent in 2012 and at 1.9 percent in 2017.

As the national response to the epidemic continues to grow, infected and affected people also continue to be discriminated against and stigmatized both in the community and in healthcare settings.

Infected people are often perceived as having socially despised behaviors, such as Men who have Sex with Men (MSM). According to a survey conducted in Haiti and published by the United Nations Program for HIV, the prevalence of this infection among MSM is 18.2 percent.

Sickness And Social Exclusion: The Double Burden Of MSM

Sociologist Erving Goffman distinguished three types of stigma: physical deformity, character blemishes and prejudices. The first type is attributed to innate or acquired physical deformities. It is therefore different from the standards of fitness that are idealized by society. The second is attributable to behaviors with perceived negative consequences. This is the case, for example, of people infected with HIV, men who have sex with men (MSM) and alcoholics. And, the third results from the perception that one race, religion or nationality is superior to another.

The second case, people with HIV face considerable stigma because many believe that they could have controlled the behaviors at the root of the infection.

Ethnographically, Haiti is closer to several countries on the African continent where studies have been conducted on this issue. They reveal how homosexuality is perceived as a dangerous threat to fight as it could disturb the social, religious, moral and demographic order. This perception hampers the continuum of care available to citizens including prevention, screening, enrollment in care and therapeutic adherence.

Sexual behavior is framed by strict social taboos against homosexuality, which leads MSM to conceal their sexual activities. Many MSM, therefore, develop heterosexual relationships, a behavior that also serves as a bridge for HIV transmission from the MSM community to the general population.

A View From The Haitian Laws

As several human rights organizations have pointed out there is no law against homosexuality in the Haitian penal code. And MSM are protected under the 1987 constitution. According to art. 35-2, discrimination in the workplace on the basis of “sex, opinions and marital status” is prohibited.

Yet, in August 2017, the Haitian Senate passed a law prohibiting marriage between same-sex couples.

While this measure is not new —as the national civil code recognizes only the unions between a man and a woman— the vote reflects a growing intolerance towards the MSM community, because it aims to prohibit any display of homosexuality in the public space.

In addition, there is no anti-hate crime law that specifically addresses the discrimination and harassment experienced by MSM because of their sexual orientation or gender identity. Homosexuality is considered taboo by Haitians who are largely influenced by Christianity.

Stigma is also perceived and experienced in healthcare settings.

Anxiety about their HIV status and its social consequences are cited by people as major deterrents to testing. Confidentiality is also a concern because some health facilities separate patients presenting for HIV testing from those seeking other health services so it is made obvious who is attending HIV services.

Negative perceptions of the medical community related to lack of specific skills and knowledge of care providers also hamper good care management —which often requires specific needs— and fuels the fear of being exposed as a homosexual.

Homophobic opinions expressed in common culture result in stigma and discrimination against MSM in society, negatively affecting their participation in successful national response strategies against the epidemic. They are also victims of multiple forms of violence perpetrated by the police force.

Even in the presence of aid development donors and a supportive political community, stigma and public discrimination create an environment conducive to hostilities.

Although many efforts are being made to improve the management of MSM infected with HIV in Haiti, societal situations persist at different levels that prevent the identification and full implementation of effective strategies to reduce stigma on a large scale.

Although clinical interventions remain the most common, some community initiatives have also been tested in small groups and some organizational level interventions. This includes training and sensitization sessions for medical staff, peer tutoring and support throughout the continuum of care. It has also included the setting up and evaluation of specialized clinics.

But without the political will and resources to support and intensify activities in healthcare facilities and communities, inclusion, respect and tolerance, which are essential to HIV eradication, will remain purely theoretical.