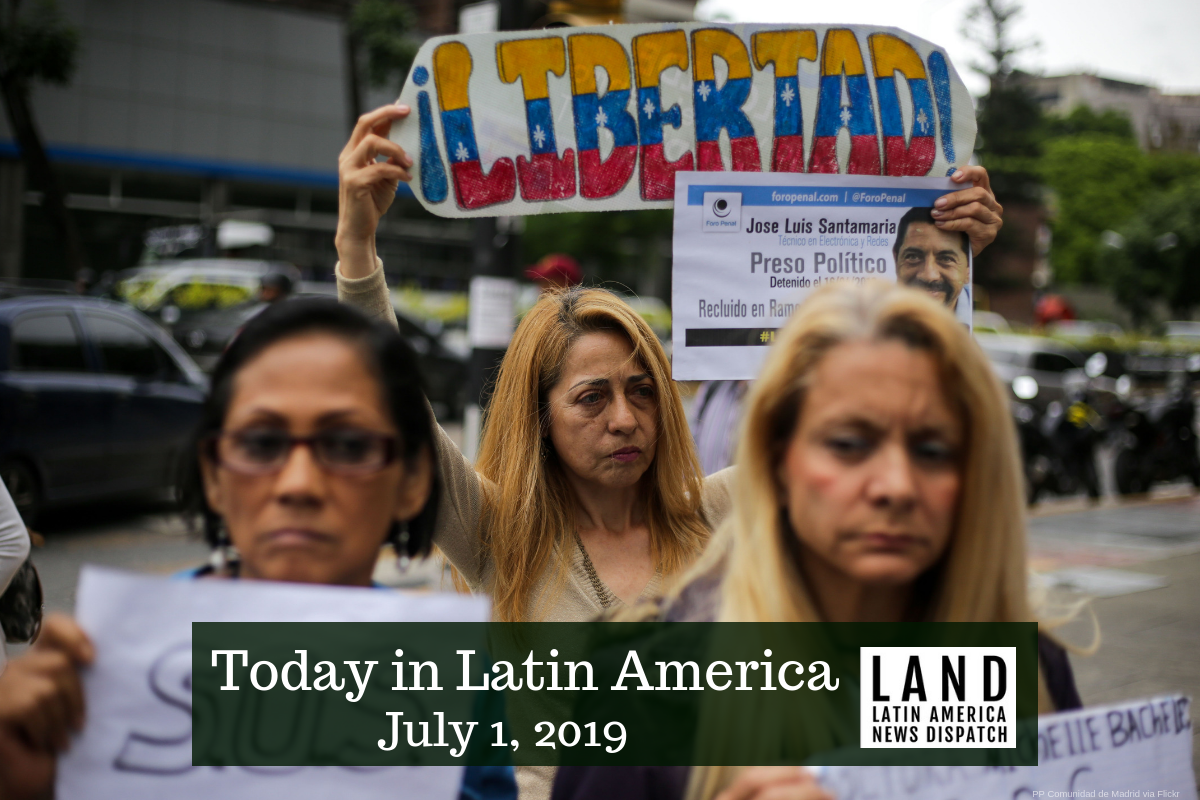 Relatives of political prisoners demonstrate outside the headquarters of the United Nations Development Programme in Caracas on June 20, 2019 during the visit of the UN High Commissioner for Human Rights, Chilean Michelle Bachelet. (Photo by Cristian Hernandez/AFP/Getty Images)

VENEZUELA: A navy captain detained for allegedly conspiring against President Nicolás Maduro died in custody yesterday. Rafael Acosta had been arrested with five other military officials a week earlier. Opposition leader Juan Guaidó denounced the death, which comes alongside reports that the opposition and the government of Maduro may resume talks this week.

On Friday, the United States announced sanctions against 29-year-old Nicolás Ernesto Maduro Guerra, President Maduro’s son, who will not have access to U.S. assets or firms. In Medellin, Colombia, the Organization of American States debated next steps for pressuring the Venezuelan government, though members were divided on the presence of a representative of Guaidó.

MEXICO: Mexican President Andrés Manuel López Obrador (AMLO) deployed a new National Guard yesterday to combat violence across the country. The guard, which was created seven months ago, will consist of members of the federal police, marines, soldiers and new recruits. After an initial deployment of 70,000 people, the National Guard will eventually grow to 150,000, according to AMLO. The focus of the National Guard will be to prevent and combat delinquency and preserve public security. Activists have expressed concern over the new guard, citing possible human rights abuses.

MEXICO: In response to the growing number of migrants waiting in Mexico for their asylum applications to be processed in the United States, Mexican President Andrés Manuel López Obrador (AMLO) announced a plan to provide factory jobs for 40,000 migrants in northern states. The deal is expected to be signed this week. Mexico has been overwhelmed with migrants as U.S. President Donald Trump pushes for them to remain in Mexico. The jobs plan isn’t the only solution AMLO has offered, however. Also over the weekend, Mexico deported 81 Haitian migrants in an attempt to stem the flow of migrants into the United States.

UNITED STATES: A Salvadoran man died in U.S. border custody after migrating with his daughter. The man, 43, was held at the Rio Grande Valley processing center in McAllen, Texas, for a week before he collapsed and later died at a hospital, officials said. The man’s death adds to the growing number of migrant deaths in U.S. custody since President Donald Trump has been in office. The deaths have included at least seven children.

EL SALVADOR: The remains of a father and daughter who drowned at the Rio Grande last week were returned to El Salvador yesterday. The image of Oscar Alberto Martínez, 25, and his 23-month-old daughter Valeria sparked outrage and anguish around the world, with many blaming the intense migratory policing at the border. National authorities are expected to begin the repatriation process for the body of a 43-year-old Salvadoran man who died after collapsing at a border station in Texas.

PANAMA: On Friday, tourism authorities opened a new visitor center at the San Lorenzo Fort, a 16th Century military complex in the north of Panama. Recognized as a UNESCO World Heritage site in 1980, the Fort is located on the Chagres River and was a strategic point along the gold trading routes from South America to Europe. Refurbishments also include the development of an educational program and an environmentally-conscious site agenda.

PUERTO RICO: The Financial Oversight and Management Board (JSF) filed a lawsuit that alleges several companies took fraudulent payments from the island’s utility company (PREPA) for over a decade. The JSF says that Trafigura and Vitol, commodity-trading companies, supplied low-grade oil to PREPA. Three laboratories are also accused of falsifying test results meant analyze oil quality to secure the sale to the indebted power company.

DOMINICAN REPUBLIC: The intellectual author that wounded baseball star David Ortíz allegedly offered to pay $30,000 to kill the intended victim. Victor Hugo Gómez, a drug-dealer associated with the Gulf Cartel, has only paid $10,000 to the hitmen he hired to assassinate his cousin, Sixto David Fernández. Fourteen suspects have been arrested in the mistaken-identity ambush that occurred in Santo Domingo on June 9.

REGIONAL: The four South American countries making up the trade bloc Merosur reached a draft agreement with the European Union Friday, despite earlier warnings from French President Emmanuel Macron that he would not sign on if Brazil exited the Paris Climate Agreement. The EU’s largest trade deal to date, the agreement will end billions of dollars in tariffs on a variety of agricultural and manufactured goods. Negotiations for the deal gained momentum after 2016, as talks between the United States and EU fell apart and political shifts moved South American governments toward an embrace of free markets. Mercosur has existed since the 1990s and includes Argentina, Brazil, Paraguay and Uruguay. The deal still needs to be finalized by both parties and approved in the European Parliament, where it is likely to meet resistance from environmental groups worried about deforestation.

CHILE: Facing criticism for the impacts of a new migration policy, the Chilean government is blocking the National Institute of Human Rights (INDH) from inspecting embassies and consulates. INDH director Consuelo Contreras said the restriction will not affect the organization’s work but called the government’s attitude “worrisome and strange.” Hundreds of migrants are stranded in the Peru-Chile border zone because they lack the documents necessary for the new “democratic responsibility visa.” President Sebastián Piñera said from the G20 Summit in Japan that the new steps are necessary to protect the country’s borders. Released last week, the visa allows Venezuelans to stay for one year, and it can be renewed for another 12 months.