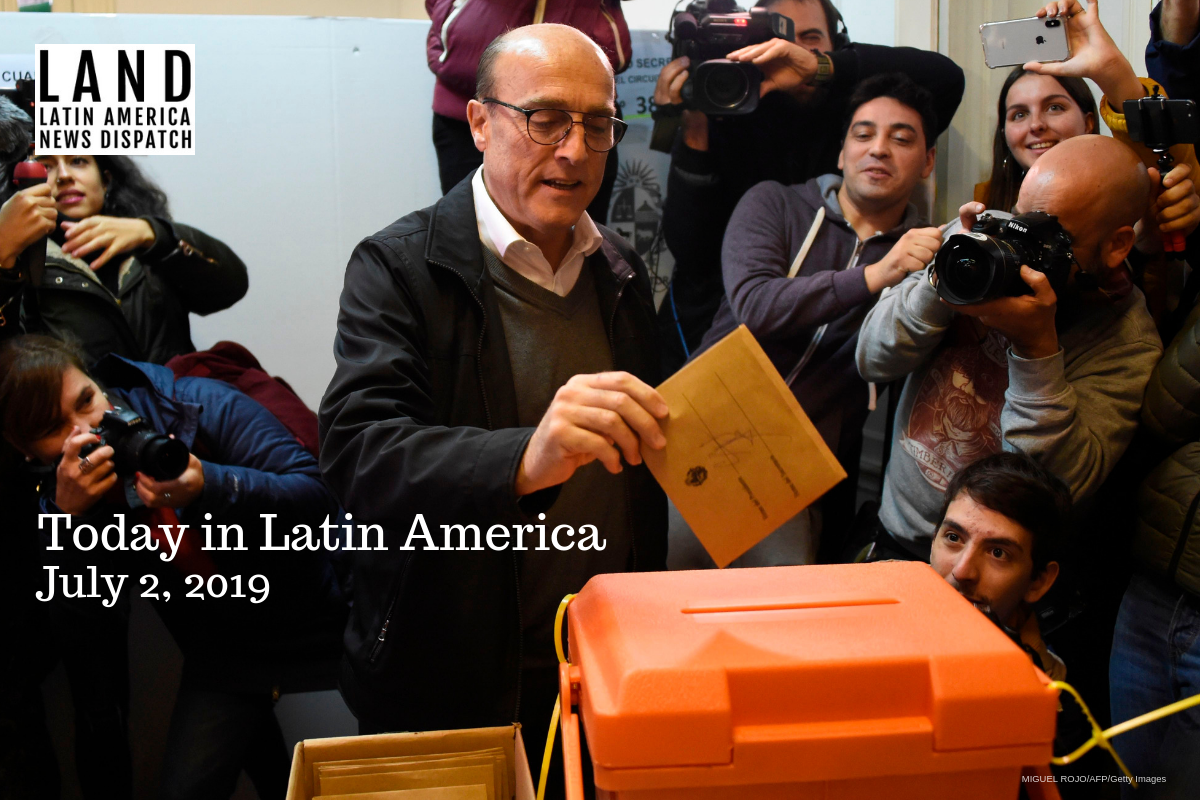 URUGUAY: The results are in from Sunday’s presidential primary election. Daniel Martínez, the former mayor of Montevideo, will face off against Luis Lacalle Pou, a senator and the son of former President Luis Alberto Lacalle. The election will be held October 27. The lead-up to the primary elections was tense, with Lacalle racing against multimillionaire Juan Sartori for the center-right National Party nomination. Sartori finished in a distant second place.

The National Party made big strides in the primary election, with 41.6 percent of the overall vote. The Broad Front, Martínez’s party, won just 23.6 percent. The left-leaning Broad Front has held the presidency and congress since 2005, but the primary results hint that this may change. Uruguay could become the next Latin American country to take a turn to the right, following Argentina, Brazil, Chile and others.

UNITED STATES:  A group of lawmakers from the Congressional Hispanic Caucus were in Texas yesterday inspecting detention facilities where Customs and Border Protection has been holding migrants. Rep. Alexandria Ocasio Cortez denounced the facilities on Twitter as products of “systemic cruelty” and a “dehumanizing culture.”

I see why CBP officers were being so physically &sexually threatening towards me.

Officers were keeping women in cells w/ no water & had told them to drink out of the toilets.

This was them on their GOOD behavior in front of members of Congress.

The visit came shortly after ProPublica revealed a Facebook group made up of more than 9,000 current and former Border Patrol agents, where members shared jokes about the deaths of migrants as well as vulgar posts about Ocasio-Cortez. CBP said in a statement it was opening an investigation into the group.

MEXICO: Parts of Guadalajara were under more than four feet of hail after a storm hit early yesterday morning. The sudden downpour partially buried cars and damaged 200 homes. The temperature reached 81 degrees later in the day as crews dug out buildings and cleared streets. Despite the combination of hail and flooding, the hail stones were less than 1 cm in diameter, and authorities believe no one was injured.

MEXICO: One year after his election, President Andrés Manuel López Obrador (AMLO) has an approval rating of 66 percent, according to a June poll by a Mexican newspaper. This is one percent less than in May and 17 percent less than in February, when support for AMLO appeared to reach an all-time high. Despite support for the president, a majority of participants rated the government’s performance as negative on major issues such as education, health, corruption, the economy, and public security. AMLO said Monday he would like to dissolve the army and rely on Mexico’s new national guard, though he admitted such a change will probably not happen.

EL SALVADOR: President Nayib Bukele assumed government’s responsibility over the death of two migrants that drowned in the Rio Grande. “People don’t flee their homes because they want to; they flee because they have to,” said Bukele. A private burial took place yesterday in San Salvador for Óscar Martínez and his 23-month-old daughter Valeria, with around 200 people in attendance, including Interior Minister Mario Durán.

PANAMA: Yesterday, Laurentino “Nito” Cortizo was inaugurated as president in Panama City. The cattle rancher pledged to end corruption and reduce inequality during his swearing in ceremony that included the attendance of U.S. Commerce Secretary Wilbur Ross and the presidents of Colombia, Peru, Bolivia and other Latin American dignitaries. Succeeding outgoing president Juan Carlos Varela and the Panameñista Party (PP), Cortizo and the Democratic Revolutionary Party (PRD) won the May 5 elections by the closest margin in Panama’s history.

HAITI: Over the weekend, joyous crowds took to the streets of Port-au-Prince to celebrate the Haitian national football team’s advance to the Gold Cup’s semifinal. The come-from-behind 3-2 victory over Canada prompted celebrations in the southern cities of St. Marc and Les Cayes.

President Jovenel Moïse congratulated Les Grenadiers via Twitter for their “exceptional” performance throughout the regional tournament. Today, Haiti plays against Mexico in Phoenix, Arizona. The other Gold Cup semifinal, Jamaica vs. the United States, takes place tomorrow in Nashville, Tennessee.

VENEZUELA: Following the in-custody death of a Venezuelan navy captain over the weekend, the secretary-general of the United Nations called on Venezuela to open an independent investigation. António Guterres said he was “deeply concerned” about the circumstances surrounding the death of Captain Rafael Acosta. Acosta’s wife also called for a UN investigation into her husband’s death, which she attributes to torture. Venezuelan authorities said that they will investigate the death and that two officers in the country’s military intelligence agency have been arrested on homicide charges.

BRAZIL: Thousands across Brazil rallied Sunday in support of President Jair Bolsonaro following a damning report from The Intercept about Justice Minister Sergio Moro. The Intercept published leaked messages that showed that Moro worked closely with prosecutors to convict former President Luiz Inácio Lula da Silva. Demonstrators said they doubted the veracity of the leaked messages. Bolsonaro has completed his first six months in office, and his approval rating rests at just 32 percent.