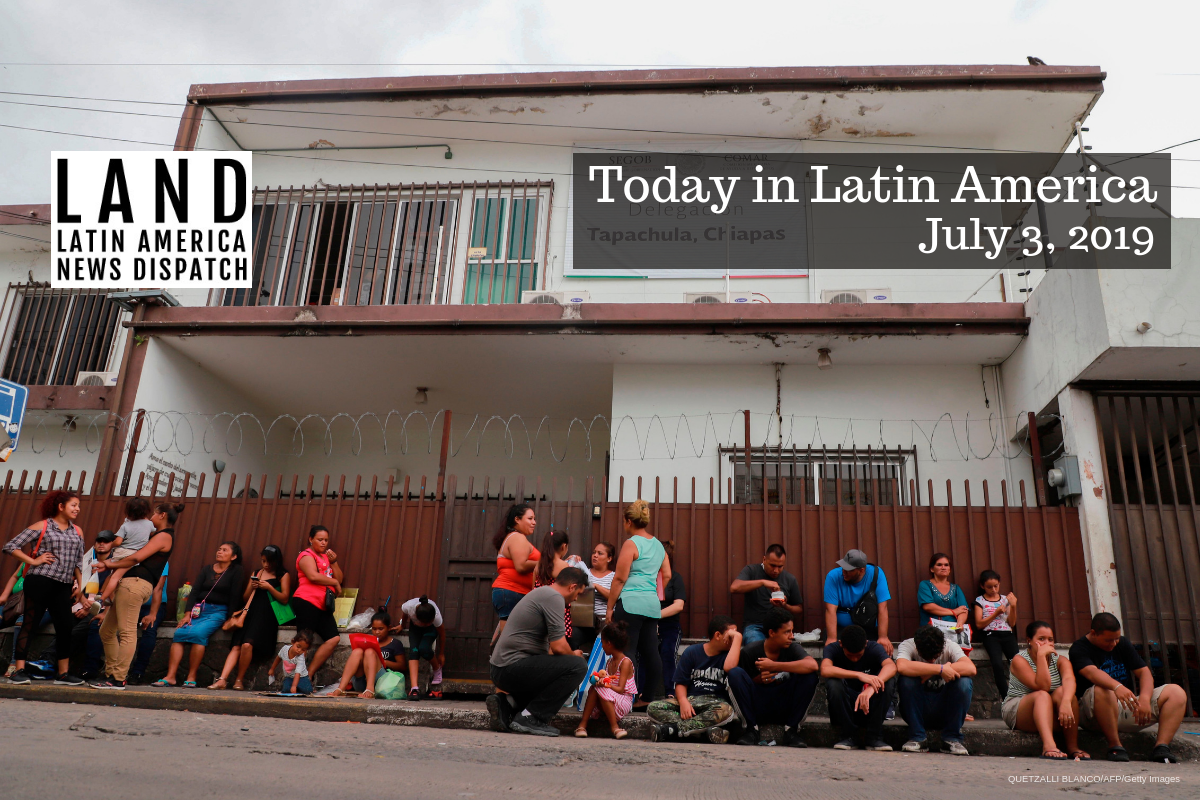 MEXICO: Nearly 70 Central American migrants were taken back to their home countries yesterday on buses from Mexico, where they had remained while they awaited their asylum hearings in the United States. Mexico’s Foreign Relations Department said their returns home were voluntary. The migrants decided to return home rather than wait for the cases to be decided, which could take a year and a half.

The group, which was made up of 40 Hondurans, 22 Guatemalans and seven Salvadorans, was part of the “remain in Mexico” program. The Trump administration program, which sends asylum seekers back to Mexico to await their hearings, has been condemned by immigration advocates and lawyers, who say it causes confusion and fear in migrants. A report by Human Rights Watch claims migrants forced to wait in Mexico face violence, kidnapping, and sexual assault.

UNITED STATES: A lawsuit was filed in Georgia yesterday claiming discrimination against Puerto Ricans applying for drivers licenses. According to the lawsuit, filed on behalf of Puerto Rico-born Kenneth Cabán González, the Georgia Department of Driver’s Services forces Puerto Ricans to take extra driving tests and prove that they are Puerto Rican by answering difficult questions about the island. Cabán handed over identifying documents to the agency over 600 days ago and has yet to receive them back. The lawsuit alleges the agency is keeping documents like these for “fraud review.”

MEXICO: The peso strengthened yesterday after U.S. President Donald Trump said tariffs were off the table in response to Mexico’s actions in stemming the flow of Central American migrants heading to the United States. Last month, Mexico deployed militarized police across the country to block and detain migrants. The country’s foreign ministry said migrant apprehensions at the U.S.-Mexico border were down 30 percent since May. Trump had given Mexican President Andrés Manuel López Obrador (AMLO) until the end of July to decrease the number of migrants reaching the U.S.-Mexico border, threatening to impose tariffs otherwise. Trump’s comments caused the peso to strengthen about 0.25 percent against the dollar yesterday.

HONDURAS: The country is experiencing a dengue fever outbreak, with 298 municipalities declaring a state of emergency yesterday. The Honduran Ministry of Health has recorded 15,406 cases nationwide, with coastal departments like Cortés and Yoro having the most registered cases. According to the World Health Organization (WHO), Honduras accounts for 77.5 percent of all dengue cases reported in the Americas.

COSTA RICA: Yesterday, security forces cleared roadblocks erected by Costa Ricans protesting a tax increase and ongoing attempts at education reform. The police operative occurred after President Carlos Alvarado delivered a nationwide speech urging “peace and dialogue” in the country. The mobilizations began last Friday, when the truckers’ union organized a protest against a new sales tax at 13%. Costa Rica’s education minister, Edgar Mora, resigned his post this Monday after teachers’ demonstrations against the dual-education reform were recorded in various parts of the country, where protesters also demanded facility improvements in public schools.

BARBADOS: A seven-day search for New Jersey couple gone missing after renting a jet-ski has been called off by Barbadian authorities. Oscar Suárez and Magdalena Devil rented the aquatic vehicles in Holetown Beach on June 24, when they were last seen. Prime Minister Mia Amor Mottley said that searches typically go for 72 hours, but she ordered maritime authorities to continue looking for the two American citizens. The search-and-rescue party was officially called off after the United States withdrew its support on Sunday.

ECUADOR: The government sent 2,400 authorities to an illegal gold mine run by organized crime yesterday, after President Lenín Moreno had declared a state of emergency over the area. Miners have been moving to the Buenos Aires mine since 2017, and up to 10,000 people live there now. But police say the criminal organizations that have arrived to control the plunder have escalated the situation through extortion, human trafficking and homicide.

VENEZUELA: A judge announced that jailed 30-year-old lawmaker Juan Requesens will stand trial for an alleged assassination attempt on President Nicolás Maduro. A drone exploded at a military parade Maduro attended last August, and Requesens was arrested three days later. He denies the allegations, but if found guilty, could spend 30 years in prison. Requesens organized opposition protests in 2014 before being elected to the National Assembly the next year. During the attack in August, Maduro was unhurt, but a second drone injured a child when it crashed into a nearby building.

COLOMBIA: A World Bank investment officer may face a million-dollar fine for connections to Latin America’s massive bribery scandal involving the Brazilian construction company Odebrecht. María Victoria Guarín was helping the Colombian government with the bidding process for the country’s largest transportation project to date, and her husband’s company ended up securing the contract. The company, Grupo Aval, was partnered with Odebrecht. The case has drawn attention to the World Bank’s International Finance Corporation (IFC), which is accused of failing to prevent a conflict of interest. The IFC, which has been heavily involved in infrastructure projects across the region, has denied the accusations.

ARGENTINA/CHILE: A total solar eclipse traveled over a 90-mile section of land in Chile and Argentina yesterday. The event started over the Pacific Ocean and reached totality over the west-Chilean town of La Serena at 4:38 p.m. Eastern Time. Four minutes later, onlookers in Argentina were able to see the full eclipse from Chascomús, a town 80 miles south of Buenos Aires. An observatory below Chile’s famously clear desert skies was also in the path of the eclipse. The event was partially visible in several other South American countries. The next total solar eclipse will cross a different stretch of Chile and Argentina in December 2020.