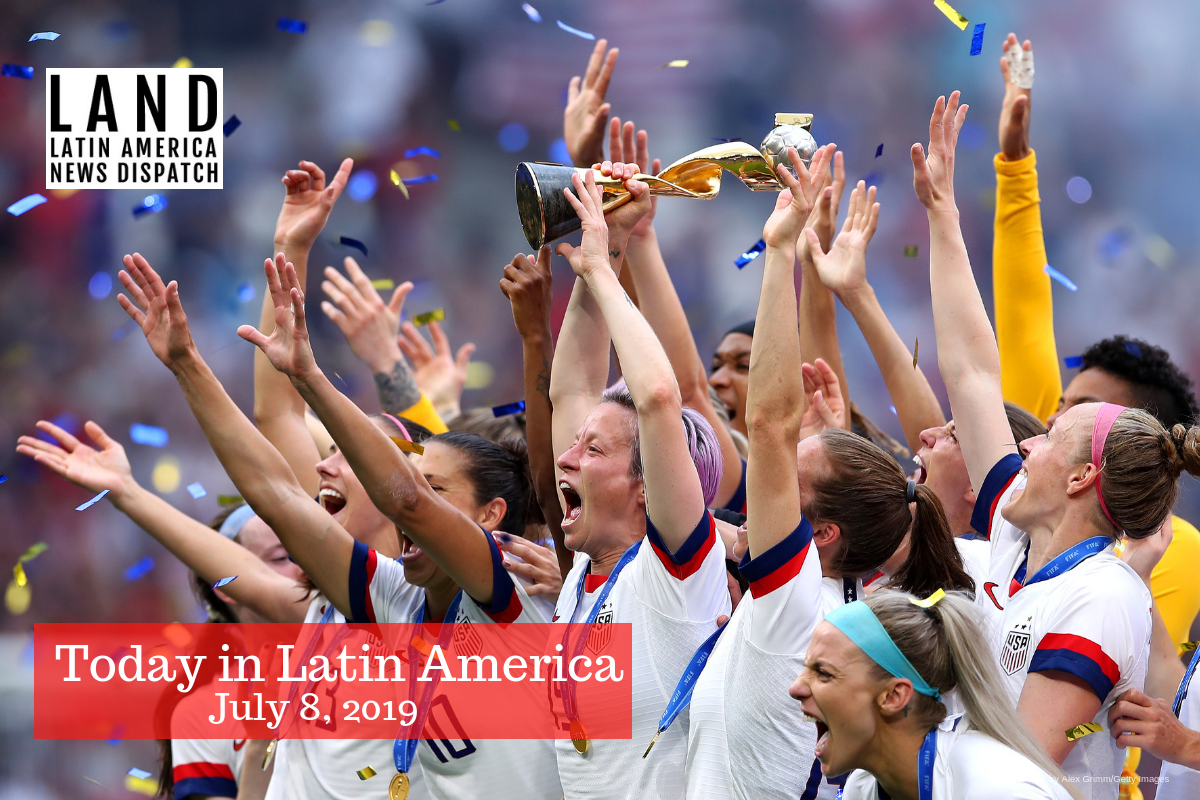 UNITED STATES: With a 2-0 win over the Netherlands, the United States claimed its fourth FIFA Women’s World Cup, now winning twice as many titles as any other nation since the competition started in 1991. Goals by the tournament’s top scorer Megan Rapinoe and breakout star Rose Lavelle secured the USWNT back-to-back championships, following their success in Canada four year ago. The final match was held in Lyon, France, where the crowd chanted “Equal pay! Equal pay!” as the game ended. A “ticker-tape” parade is planned to take place in New York City this Wednesday.

REGION: Mexico defeated the United States, 1-0, in the final match of the Gold Cup, held Sunday night at Chicago’s Soldier Field. Jonathan Dos Santos scored the only goal in the second half, earning Mexico its eighth regional title, two more than the United States. Mexico coach Gerardo Martino won his first title after losing continental finals with Paraguay in 2011 and with Argentina in 2015 and 2016.

EL SALVADOR: A Salvadoran court absolved two former presidents from a high-profile graft case. Francisco Flores (1999-2004) and Antonio Saca (2004-2009) had allegedly diverted $10 million in humanitarian aid disbursed by Taiwan to help victims of an earthquake that hit El Salvador in 2001. Saca is currently serving a 10-year sentence for embezzling over $300 million during his time as president. Flores died under house arrest in 2016 while he waited to face trial for misusing public funds.

BAHAMAS: Yesterday, the Bahamas Air Accident Department recovered the helicopter carrying coal billionaire Chris Cline and seven other passengers as they headed to Fort Lauderdale. The accident occurred on July 4 after the helicopter took off from Big Grand Cay early Thursday and was found overturned in 16 feet of water by locals. Cline’s Foresight Energy managed the coal rights in the Illinois Basin, known for its high-sulfur coal deposits. Cline was a major Republican donor who contributed to Donald Trump’s election campaign.

VENEZUELA: The administration of President Nicolás Maduro had its Independence Day celebration on Friday with a military parade in Caracas. Tanks, fighter jets, and special units marched in front of the presidential stand, where high-ranking members of the armed forces stood beside President Maduro. Meanwhile, opposition leader Juan Guaidó led a rival march across town, denouncing Maduro’s regime for torture and crimes against humanity. Talks between the government and the opposition resume this week in Barbados.

ECUADOR: President Lenín Moreno announced that Ecuador will join the market-friendly Pacific Alliance next year, an economic bloc formed by Perú, México, Colombia and Chile in 2012. The move comes as the country experiences a rightward shift under the Moreno administration, who served as vice-president for leftist Rafael Correa between 2007 and 2017. With over 50 states participating as “observers,” the Pacific Alliance seeks to strengthen Latin American ties with the Asia-Pacific region.

REGION: A 3-1 victory over Perú handed Brazil its first Copa América title after a 12-year drought. The final game of the South American football championship took place in Rio de Janeiro, where 70,000 people packed the Maracanã Stadium. Accompanied by several ministers, including Justice Minister Sérgio Moro, President Jair Bolsonaro presented the trophy to the champions and received boos and jeers from the crowd.

BRAZIL: Brazilian singer, guitarist and songwriter João Gilberto, who is considered one of the fathers of the Bossa Nova genre, died aged 88 in Rio de Janeiro on Saturday. Born in the northeastern state of Bahía, Gilberto is credited with introducing the widely-known style of music to the world, mixing jazz and traditional samba music. Among his many hits are “The Girl From Ipanema” and “Desafinado.”

ARGENTINA: The International Monetary Fund (IMF) agreed to disburse $5.4 billion to the Argentinian government on Friday, after the country fulfilled all its fiscal, monetary and social expenditure targets set by the Fund. This will be the fourth installment of the record $56 billion bailout given by the IMF last year amid a currency crisis. Argentina remains the IMF’s largest debtor.