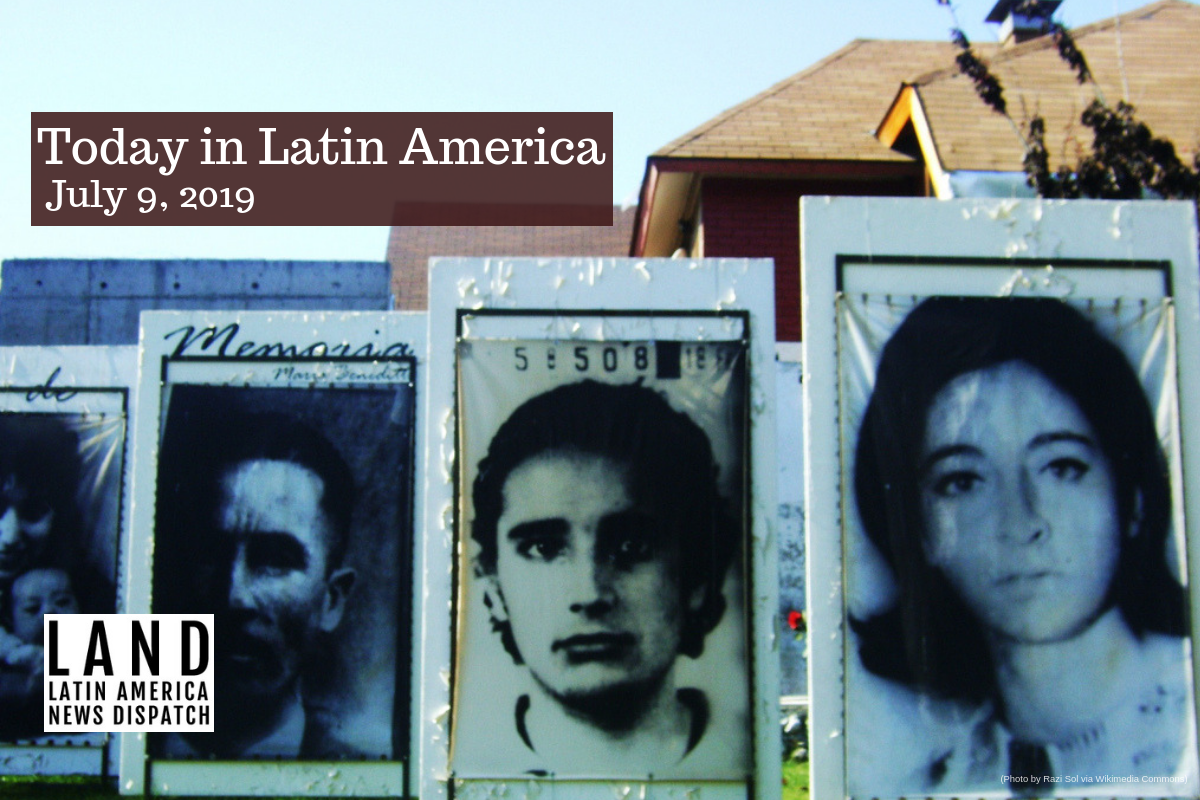 Photos of people disappeared during the military dictatorships of the 1970s and 1980s located in Parque por la Paz at Villa Grimaldi in Santiago, Chile. (Photo by Razi Sol/Wikimedia Commons).

Jointly presented by the victims’ relatives, the case began 20 years ago in an appeals court in Rome, with citizens from Bolivia, Paraguay, and Italy also among the two dozen convictions. Around sixty thousand civilians are estimated to have died during the secret U.S.-backed campaign implemented by right-wing dictatorships in South America during the seventies and eighties.

UNITED STATES: U.S. authorities want Joaquín “El Chapo” Guzmán to pay back $12.7 billion that he allegedly earned during his drug-trafficking activities. Prosecutors in a federal court in Brooklyn said they arrived to the sum by estimating the total amount of marijuana, heroin, and cocaine that the former head of the Sinaloa Cartel trafficked internationally, and multiplied it by the average price of each drug. Chapo’s lawyers called the forfeiture “an academic exercise” as authorities have been “unable to locate a penny” of the drug proceeds supposedly generated by Guzmán, who was convicted on all 10 charges he faced on February 12.

MEXICO: Authorities in the state of Zacatecas used a large x-ray used to detect 51 migrants who were hiding in trucks. Federal police found the group of migrants from the three Northern Triangle countries, Nicaragua, and Ecuador in the municipality of Concepción de Oro, 200 kilometers (124 miles) southwest of Monterrey, in northern Mexico. Twenty-one minors were traveling as part of the group that was headed to the U.S. border.

PUERTO RICO: A 1-year-old girl died after falling from a cruise ship docked in San Juan on Sunday. The island’s Port Authority said that the infant fell from the arms of her grandfather, who was leaning out the window of his room on the eleventh floor of the Royal Caribbean cruise. After interviewing the parents of the deceased minors yesterday, Puerto Rican prosecutors will now examine footage to determine if they will press negligence-related charges against the family. Police also said that the grandparents would be interviewed today.

GUADELOUPE: The French Navy recovered a jet ski belonging to two missing American citizens 210 miles (340 kilometers) off Guadeloupe’s coast yesterday. The jet-ski’s registration number matches the one Oscar Suárez and Magdalena Devil rented in Barbados on June 24, when they were last seen. A seven-day search-and-rescue party covering over 600 nautical miles was officially called off by Barbadian authorities after the United States withdrew its support on July 2. Barbados now hopes that yesterday’s jet-ski recovery will yield information regarding the couple’s whereabouts.

HONDURAS: Yesterday, the Mexican government announced the extension of a reforestation program in Honduras, increasing its funding to $100 million. With the intention of stemming migration from the Central American country, the initiative also seeks to generate new sources of employment in Honduras. President Juan Orlando Hernández will finalize details when he visits México at the end of the month. Recently, Mexican President Andrés Manuel López Obrador said that a similar environmental plan, valued at $30 million, would also come into effect in neighboring El Salvador. It remains unclear whether Guatemala will also be benefited by the multi-million-dollar investment project.

COSTA RICA: The country will uphold tax breaks for electric vehicles and solar panels. These products will be exempt from a 13 percent sales tax following the stipulations made by Law 7447, which provide a guideline for fiscal incentives for efficient energy use. In April, the Costa Rican government installed 34 charging stations for electric vehicles across the country.

VENEZUELA: Rule of law has “crumbled” in Venezuela under the administration of President Nicolás Maduro assured in a statement an international judicial watchdog. The International Commission of Jurists (ICJ) said that Maduro had “usurped the authority of the legislative and judicial branches” in Venezuela in a report published yesterday. The Geneva-based organization also urged the country to “rescind the National Constituent Assembly and restore the Constitutional powers of the National Assembly.”

CHILE: Central Chile is undergoing its worst drought in sixty years. Shortage of water due to land exploitation and other factors, exacerbated by climate change, could result in metropolitan regions like Santiago and Valparaíso to be left without drinking water by 2030. Greenpeace reports that 76 percent of the country’s territory is being affected by the drought, resulting in up to 22 percent of desertification that affect over 47 million hectares of agricultural land.

BRAZIL: Two high-profile Italian mobsters, fugitive for five years, were captured by Brazilian authorities yesterday in Praia Grande, a locality in the state of São Paulo. Nicola Assisi and his son Patrick, both affiliated with the Calabrian mafia known as ‘Ndrangheta, are awaiting extradition to Italy after working in the South American branch of the criminal organization. The arrests happened two weeks after another ‘Ndrangheta boss, Rocco Morabito, escaped from a prison in Uruguay through a hole in the roof.