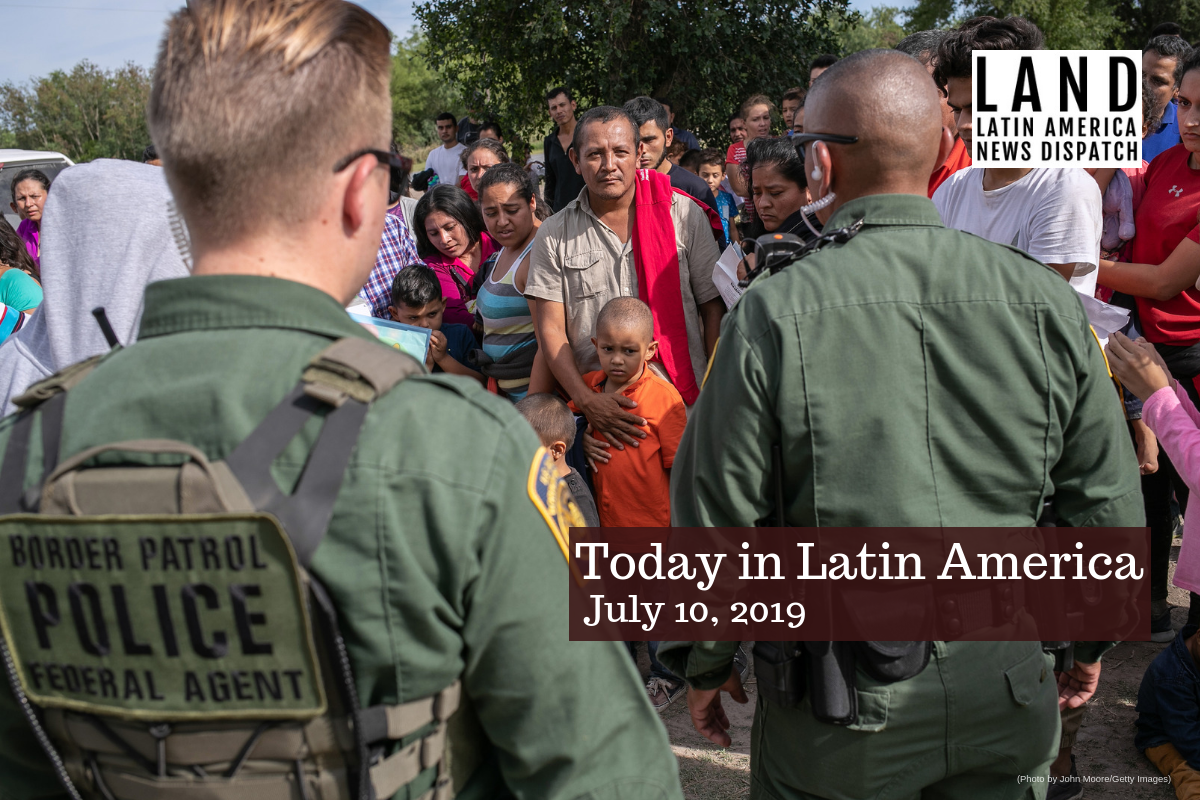 U.S. Border Patrol agents watch over immigrants after taking them into custody on July 02, 2019 in Los Ebanos, Texas. (Photo by John Moore/Getty Images)

U.S.-MEXICO BORDER: The Department of Homeland Security (DHS) reported that migrant flows fell for the first time this year, with apprehensions in the southwestern border experiencing a decline for the first time since January. Data provided by DHS and the U.S. Customs and Border Protection (CBP) indicated that 104,344 arrests happened in June, down from 144,278 in May—the highest monthly total in 13 years. The statement said that “the decrease was experienced across all demographics,” including age and nationality. The drop can be attributed to rising temperatures at the border and Mexico’s crackdown on migrants.

MEXICO: President  Andrés López Obrador said that only 3 out of 5 Mexican federal police officers pass the physical exams to gain entry to the newly-formed National Guard. Meanwhile, officers have protested their reassignment to the militarized security force since last week, arguing that they would lose seniority and benefits and receive lower wages if added to the new Guard. Addressing some of their grievances, AMLO reached a 13-point agreement with the federales yesterday.

MEXICO: The country’s Treasury Secretary presented his resignation letter yesterday. Carlos Urzúa, an ally of President López Obrador, said in his statement that “too many” public policy decisions were taken by AMLO without sufficient financial evidence. Urzúa also complained about being forced to take on political appointees with “little knowledge” of the Treasury. As a result of the resignation, the Mexican peso dropped from 18.90 to 19.27 against the US dollar yesterday.

U.S.-MEXICO BORDER: The first group of asylum-seekers was returned to Nuevo Laredo yesterday. Ten migrants that crossed into the U.S. will now await a court date in the Mexican border city near the banks of the Rio Grande, the fourth location to host asylum seekers after Tijuana, Mexicali, and Ciudad Juárez. Doctors Without Borders expressed their concern with the relocation process through a press release, saying that Nuevo Laredo “is not a safe place” for people to wait out legal proceedings given the prevalence of narco-related violence.

PUERTO RICO: U.S. Customs and Border Patrol officers working conjointly with Drug Enforcement Administration (DEA) agents stationed in the Caribbean Sea found an abandoned boat carrying $3.7 million stuffed in five duffel bags off the coast of Puerto Rico. Authorities said in a statement that the maritime task force chased the vessel, which was allegedly headed towards the U.S. Virgin Islands. The unidentified suspects fled the scene as agents approached the boat, where guns and ammunition were also found.

GUATEMALA: Amnesty International released a statement expressing their concern regarding “threats” that could “wipe out decades of efforts towards strengthening Guatemala’s justice system.” Erika Guevara-Rosas, Amnesty’s America’s director, said that “access to justice is receiving heavy blows from which Guatemala will not be able to recover unless measures are taken now.” The human rights organization also published a report, called Last Chance For Justice, which warns about the deteriorating situation of activists in the country. Two indigenous land protectors were murdered in Eastern Guatemala last Friday.

COLOMBIA: Seuxis Paucias Hernández Solarte, a former FARC guerrilla combatant, failed to show up to the Supreme Court yesterday, prompting Colombia’s highest tribunal to order his arrest. Known by his alias ‘Jesús Santrich’, Hernández went missing at the end of June according to his lawyers, who are also unaware of his whereabouts. The FARC’s peace negotiator, wanted in the U.S. for conspiring to ship cocaine, was sworn in as a congressman on June 11.

VENEZUELA: The U.S. government is discussing whether Chevron, the only remaining U.S. oil company operating in Venezuela, can get an extension on its existing sanctions waiver. White House Economic Advisor Larry Kudlow said that the license renewal “is under discussion.” Chevron’s joint venture with Petróleos de Venezuela (PDVSA) expires on July 27.

ARGENTINA: Former President Fernando de la Rúa died yesterday at age 81 after sustaining cardiovascular problems for 20 years. The Córdoba native served in both legislative chambers and was elected mayor of Buenos Aires in 1996. De la Rúa won Argentina’s 1999 presidential election, which he began with a 70 percent popularity rating. Flying out of Casa Rosada on a private helicopter, De la Rúa infamously left office on December 20, 2001, amid an economic crisis that left 30 dead and over 400 injured following massive anti-government riots.

BRAZIL: For the first time, a Minas Gerais court sentenced Vale SA, the mining company operating the Brumadinho Dam that ruptured in January 25, to pay damages for the catastrophe that left 247 dead. Although no specific monetary value was mentioned, Judge Elton Pupo Nogueira maintained a freeze on Vale’s financial assets, amounting to $2.89 billion (11 billion reais). Judge Nogueira said that the value “will not be limited to the dead, but also effects on the local and regional environment, in addition to economic activity in the affected regions.”