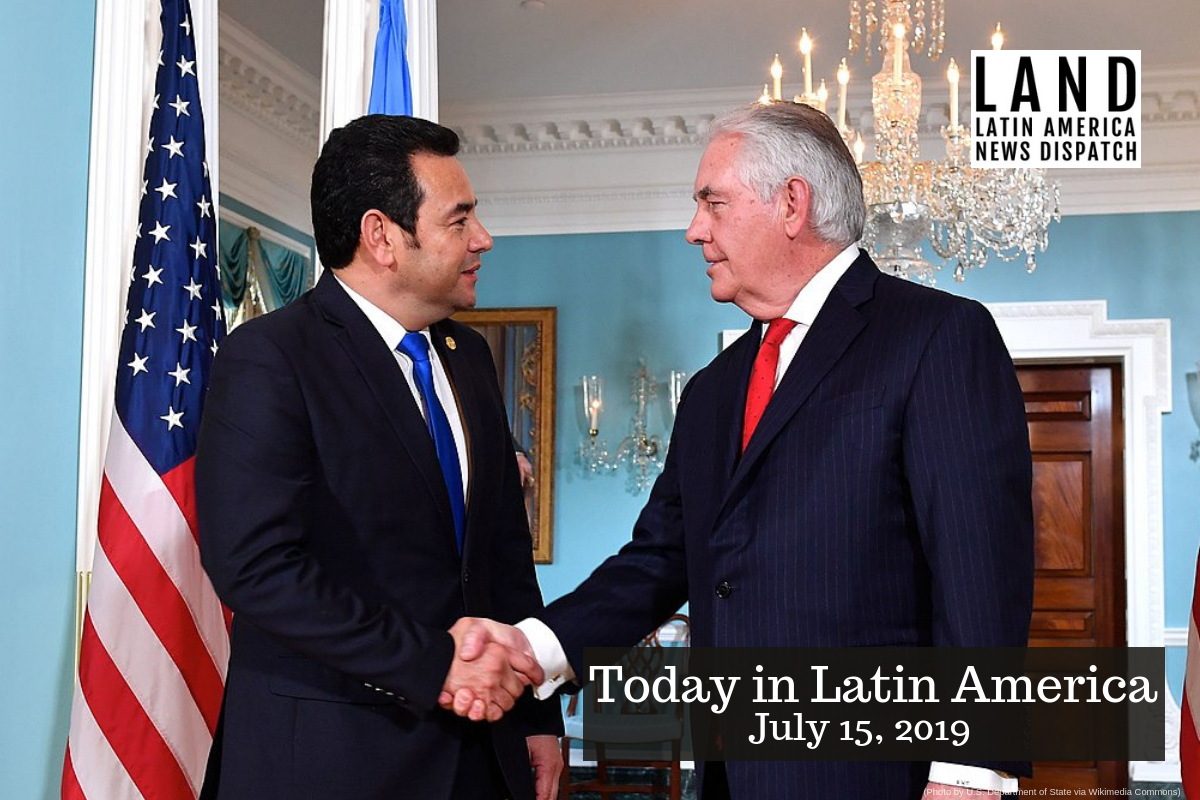 GUATEMALA: The signing of a bilateral “safe third country” migratory pact set to take place today has been postponed after facing legal and political hurdles. The decision comes as the Constitutional Court (CC) resolved an appeal against the signing of the controversial asylum policy last night. Guatemalan President Jimmy Morales announced that he would not travel to Washington, D.C, delaying a summit with Donald Trump to discuss the U.S.’s immigration proposal.

The CC’s resolution forces the president to wait for congressional approval before agreeing to become a “safe third country.” The Guatemalan government released an official statement denying that such a deal with Washington was ever on the table.

U.S.-MEXICO BORDER: In an interview with ABC News, acting director of the U.S. Citizenship and Immigration Services (USCIS) Ken Cuccinelli blamed Congress for the ongoing issues at the border facilities. Cuccinelli said that the conditions at detention centers in the southern border have deteriorated because the legislative chamber has “let it happen.” The USCIS head also noted that “a lot of people in Congress throw vitriol” at Immigration and Customs Enforcement (ICE) agents when “they are just doing their jobs” by following the laws that Congress has put in place. As of Sunday evening, there are no deportations reported from the mass raids expected to be launched yesterday by the Trump administration.

MEXICO: The government is expecting that the U.S. ramps up deportations this week. Around 1,800 Mexican nationals will be repatriated, with the first group of 98 migrants sent to Ciudad Juárez yesterday. One of the deported migrants said that U.S. authorities accelerated their deportation process “to make room for the undocumented migrants” who will be arrested in the nationwide immigration enforcement operation announced by President Donald Trump. However, Mexican Foreign Minister Marcelo Ebrard announced yesterday that “no Mexican citizen” had been apprehended during the raids.

CUBA: A segment of the island’s new railroad began operating over the weekend, as the whole Cuban railway system is expected to undergo a major overhaul. On Saturday, fourteen new Chinese-made carts and locomotive began running its 9-city trip from Havana to the city of Guantánamo, on the island’s eastern tip. The revamping project, which will restore 2,600 miles (4,200 kilometers) of tracks and refurbish dozens of abandoned trained stations scattered throughout the island, is expected to be completed by 2030.

PUERTO RICO: Political leadership is in turmoil as calls for Gov. Ricardo Rosselló to resign intensified in Puerto Rico over the weekend. Police fired tear gas at demonstrators gathered outside of La Fortaleza, the governor’s residence, who were demanding that Rosselló quits following the leak of a private chat that included text messages laced with homophobia, misogyny, and racism. Rosselló said yesterday that he would not step down as protests are expected to continue today.

HAITI: Without unveiling any new treatises, President Jovenel Moïse hosted his Taiwanese counterpart, Tsai-Ing Wen, in Port-au-Prince on Saturday. Stressing the 63-year diplomatic relationship between both countries, President Moïse recognized its Asian ally as  “a model ‘par excellence’ of long-lasting economic results” that can be applied to Haiti. A $150 million electrification project funded by Taiwan is yet to be ratified by the nation’s legislature.

PANAMA: The Panamanian Maritime Authority (AMP) has announced that they will be removing more Panamanian flags from vessels that violate international sanctions. After Washington reimposed sanctions on Iran in 2018, then-president Juan Carlos Varela approved the removal of the Panamian flag to a fleet of 59 vessels linked to the Iranian and Syrian government. Around 8,600 ships around the world fly the Panamanian flag, seen by shipowners as convenient given the avoidance of stricter maritime regulations imposed in their own countries.

VENEZUELA: The Venezuelan government arrested two bodyguards working with opposition leader Juan Guaidó on Friday. During a televised statement, Information Minister Jorge Rodríguez said that the Erick Sánchez and Jason Parisi were allegedly attempting to sell four guns that were state property. They remain in custody in Caracas. The detentions come a week after the Caribbean island of Barbados hosted talks between the government and the opposition.

ECUADOR: An Ecuadorean court has ruled that the government cannot sell tribal land in the Amazon to oil companies, putting an end to a years-long legal battle. With the ruling, the Waorani indigenous tribe will be able to keep 180,000 acres of tropical rainforest located in the eastern Pastaza province from being earmarked for oil extraction and related activities. Using their constitutional right for self-determination, the 16 different Waorani communities celebrated “a victory for their ancestors.”

BRAZIL: American journalist Glenn Greenwald has received death threats following his investigation regarding Brazil’s justice minister, Sérgio Moro, and his involvement in the imprisonment of former President Luiz Inácio Lula da Silva. The editor at The Intercept said that he “no longer can walk the streets Rio de Janeiro alone” and that his “house has become a bunker” with a 24-hour surveillance system and a security apparatus that includes armored cars and bodyguards. Greenwald participated in a Congressional hearing in Brazil last June 25, where he said that Moro has tried to “intimidate and criminalize” the work done by The Intercept.